The Association of South-East Asian Nations (ASEAN) has a population of approximately 600 million people, of which around 55% live in rural areas. The 10 ASEAN Member States (AMS) put high priority on providing their citizens with access to electricity and have made constant efforts to increase their respective electrification rates over the last decades.

Consequently, electrification in many AMS has developed very positively over the last years, leading to an considerable decrease of the un-electrified population in the region. The number of people without access to electricity went down from an estimated 190 million in 2005 (IEA 2006) to around 130 million in 2012 (compare Table 1). Despite those efforts and important improvements in some of the countries, to date more than 20% of ASEAN’s population still does not have access to affordable, reliable and sutainable sources of electricity which hampers economic development and an improved standard of living in entire regions. 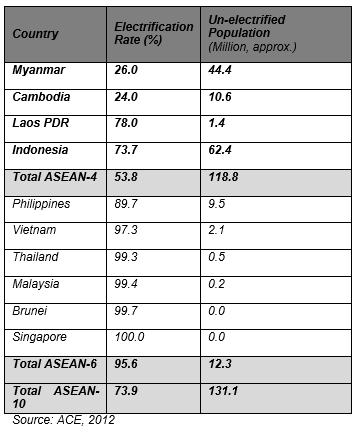 Successful examples of rural electrficiation based on renewable energy can be found all over the region. However, less successful examples, are equally widespread since these approaches often lacked a sound long term strategy or feasible business models which are crucial to ensure sustainability. The lessons learnt from these unsuccessful rural electrification projects prove that the ASEAN regoin is still facing many challenges regarding rural electrification.

These challenges are, however, still not common knowledge among the ASEAN countries. Therefore, an increased exchange of experience and innovative approaches between the ASEAN member states is essential and still high on the agenda of the ASEAN community.

The content of this “Good Practice Guideline” was developed with the inputs from rural electrification practitioners in the ASEAN region. A stakeholder survey was carried out in 2012 in four AMS (Cambodia, Indonesia, Laos, Myanmar), followed by an ASEAN-wide workshop with regional and international experts. The most relevant aspects for successful rural electrification from the experts’ point of view were identified and comprise the following:

- Socio-economic aspects and community involvement; and

The Guideline on hand aims to provide decision-makers, project developers and other actors involved in the planning and implementation of rural electrifcation activites with practical recommendations (“DOs and DON’Ts”) and gives general guidance on how to design off-grid rural electrification projects based on renewable energy technologies (RET).

It is expected that the Guideline helps to replicate successful practices and to share the lessons learnt among AMS thereby contributing to the enhanced use of RETs for off-grid rural electrification.

1.3. How to read the Guideline

The Guideline compiles the experiences of practitioners from the ASEAN region and translates them into recommendations for decision-makers. It is well understood that conditions differ from country to country and even from region to region in one particular country. Country-specific preconditions or technology-related aspects might require approaches and solutions which are either not covered by the Guideline, or not elaborated in detail.

The listed recommendations should therefore be considered as starting point for the further elaboration of rural electrification activities in individual countries and environments.

For each aspect, key success factors and lessons learnt are identified, analyzed and presented in the form of “DOs and DON’Ts”. Selected examples of successful practice are highlighted.