What is Charcoal - Introduction 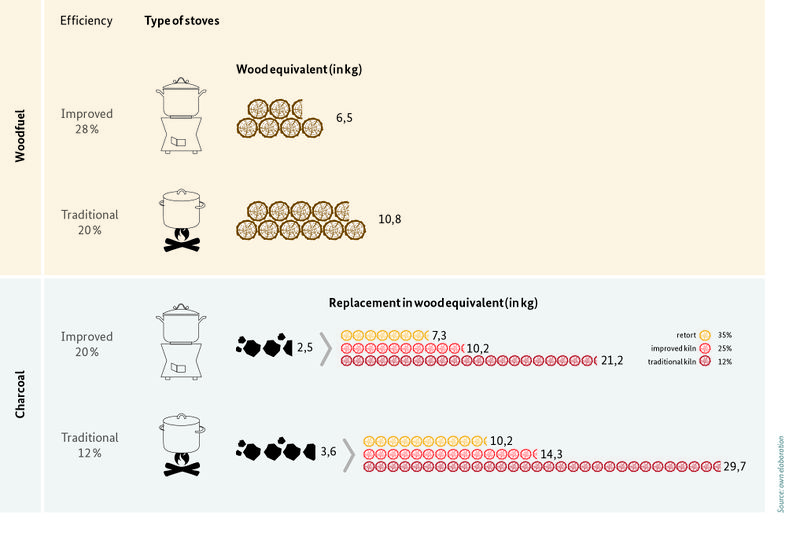 Right after production charcoal has moisture content less than 1%. Charcoal absorbs quickly moisture from the air, which can lead to a moisture content between 5% – 10%. Rain or watering by charcoal dealers to raise the weight of the charcoal can increase the moisture content even higher. However, moisture content should be kept low to prevent the energy loss, which is required to evaporate the water while burning charcoal.

How is Charcoal Produced?

During the carbonization process high temperatures induce the absorption of heat which leads to the complete decomposition of the wood, separating it into volatile gases, vapors and solid char. At 400°C, the transformation of the wood into charcoal is practically complete. At this stage, however, the charcoal still contains a considerable amount of tar, of around 30%. In order to achieve a final carbon content of around 75%, which is desirable for good commercial quality, additional heating is required to drive off the tar and to increase the fixed carbon content.[2] For the conversion of wood into charcoal the use of a “kiln” is necessary. The most common types of kilns are earth pits or mound kilns. Their efficiency ranges between 8% - 12%. Improved kilns with a higher efficiency between 25% - 40% are Casamance Kiln, Brick Kiln, Steel Kiln and the Adam Retort. For more information on kilns, see also the article on charcoal production.

The energy efficiency of the carbonization process as well as the quality of the charcoal is dependent on many factors, such as:

Global production of wood charcoal was estimated to be 47 million metric tonnes in 2011. Since 2003, global production of charcoal has increased by 11%.[3] Charcoal demand is expected to continue to grow, especially in low-income countries, due to population growth combined with increasing urbanization. More than 80% of this wood-based energy is used for domestic purposes. In developing countries the charcoal market takes often place in the informal sector and the supply chain involves a number of various actors. There are generally two types of charcoal producers: the independent / occasional farm producers who are members of a community in which charcoal production takes place. And, the employed producers who are outsiders of this community. Community-based producers sell their goods to wholesalers, transporters on the roadside or directly to retailers. Employed producers outside of a community are contracted by wholesalers in exchange for monthly payments or for produced charcoal. Often a small group of transporters and wholesalers earn the highest profits.

How is Charcoal Used for Cooking?

Accessibility of charcoal is often higher in urban than in rural settings, because charcoal has a monetary value and urban households are able to pay a price for charcoal. Additionally, charcoal is easy to transport and store due to its lightweight physical property.

Affordability is still a decisive factor in fuel decisions made by households. Considering that charcoal is cheaper than kerosene, Liquid Petroleum Gas (LPG) or electricity in most cities, it is preferred by many households. Furthermore, as in the case of firewood, charcoal can also be purchased in small quantities for very little money on a daily basis. Although the purchase price per kg of charcoal is often many times higher than that of fire wood, this is not necessarily the case for the price per unit of useful energy. This owes to the higher energy content of charcoal and the higher efficiency of charcoal-burning stoves. An analysis by ECO Consult and GIZ in 2013, showed that households which utilize firewood sometimes even spend more per unit of useful energy than those that use charcoal.[1]

Convenience is another advantage of using charcoal compared to cooking with firewood. Users do not need to be as attentive with the fire when using charcoal and it also produces less noxious fumes when burnt. Consequently, cooking pots stay cleaner for a longer time.

Health and Environmental Impacts of Charcoal Burning for Cooking

Charcoal production has been singled out as a major cause of forest degradation and deforestation in many African countries, particularly in peri-urban areas. This is due to the fact that more wood and consequently more forest area are needed for producing charcoal in order to meet the same energy needs compared to firewood. Furthermore, uncontrolled commercial charcoal production predominantly takes place in the vicinity of a market so that transport costs are kept down. Nonetheless, due to the sustainable production capacity of forests, charcoal production can actually contribute to preserving forests when it is well regulated and provides clear economic benefits to the local populace.

In addition to the issue of deforestation, substantial greenhouse gas emissions are also released during carbonization, ranging between 7.2 and 9.0kg CO2 equivalent per kilogram of produced charcoal. Improved kiln technologies can increase carbonization efficiency while additionally reducing greenhouse gas emissions. However, the adoption rate of more efficient kilns for charcoal production is still very low, mostly due to the informal – and often illegal – nature of charcoal production.[4] In areas where wood is a freely accessible good, traditional charcoal makers have no incentive for improving production.

Inefficient practices, conversion and end-use technologies for charcoal can also have serious implications for local and regional air quality. During charcoal production, the unloading of kilns, the collection of charcoal ashes for briquettes, and the burning of charcoal in households, gases and particulate matter (PM) are emitted into working and living environments. PM, carbon monoxide, nitrogen oxides, sulphate oxides and other volatile compounds emitted during charcoal processing and burning may lead to respiratory problems and ultimately illnesses such as acute respiratory infection (ARI), chronic obstructive pulmonary disease (COPD), asthma, lung cancer or low birth weight.[5] Indoor air emissions from charcoal stoves are lower than those from the combustion of fire wood in traditional and improved stoves.

Retrieved from "https://energypedia.info/index.php?title=Cooking_with_Charcoal&oldid=351712"
Categories:
Cookies help us deliver our services. By using our services, you agree to our use of cookies.