Cooking with the Sun

A solar cooker uses the energy of direct sunlight to heat, cook, bake or pasteurize food or drink. It only works when the sun shines, so solar cooking can never be a stand-alone technology. Solar energy can be an ideal component of the energy mix of a household to complement other combustion-based stoves that can produce heat on demand based on other fuels. To which degree solar energy can replace other fuels depends on local dishes and cooking habits. It is also very much dependent on the local climatic conditions, which can vary tremendously over the course of a day or a year. All in all, over the year in a whole, fuel savings amount to roughly 30%-40%.[1]

In any case a detailed assessment of the baseline cooking habits and important factors such as convenience, availability, affordability and reliability are essential to elaborate on the potentials of supplemental solar technologies to an existing household energy mix:[1]

Most solar cookers that have been developed to date fall into five categories:

Panel-type solar cookers have a set of reflective panels focused on a black pot. These devices have been widely used in refugee camps as well as households. They can be very low in cost, with reflectors made of cardboard, plastic foam or other low-cost materials. Most panel solar cookers include a transparent cover or plastic bag in which a black cooking pot is enclosed. This increases the efficiency by reducing convective heat loss and exploiting the 'greenhouse effect'.[2]

One example of a successful panel cooker is the CooKit[3], a simple panel cooker, which can be fold to the size of a large book for easy transport. It was widely used in the Darfur project by Jewish World Watch, in which over 260,000 were distributed. The CooKit used a cardboard reflector that was not very durable. Another example of a very durable, high-efficiency panel cooker, the HotPot[4], used a glass outer liner and lid enclosing a black bowl. It has a reflector made of sheet aluminium. About 20,000 of these panel cookers were distributed in Mexico. There are many more designs that are catalogued on the solar cooking wiki, www.solarcooking.org.[2] 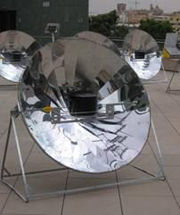 Parabolic cookers can be made from aluminium sheets, iron, or even concrete coated with aluminium foil. Through their parabolic shape, they focus radiation from the sun onto the bottom of the pot. They generally have a higher energy output than box cookers (see below) and can reach temperatures of up to 250 °C. These high temperatures enable users to do cooking, stir-frying and baking. Aluminium parabolic cookers are lightweight and can easily be transported. However, their production requires a high degree of precision and they are usually imported as sets, which are locally assembled. As a result, in most developing countries, aluminium cookers are too expensive for the majority of the population (US$ 100 and above). Furthermore, such cookers are prone to wind damages to the aluminium sheets. In areas of frequent dust storms, the sheets tend to become scratched over time, reducing the heat output by as much as 30%. To achieve maximum performance, parabolic cookers must be reoriented to the sun about every 20-30 minutes, which can be cumbersome and inconvenient for the cook, when large amounts of food are cooked. Moreover the cook can be "dazzled" (blinding of eyes) when the cooker is not handled properly.[1] One solution that has been promoted is the use of sunglasses; another approach is to turn the cooker out of the direction of the sun before the food is stirred.

A variation of the parabolic cooker is the so-called Papillon, which has been promoted in Burkina Faso.[5] It has a higher output than the well-known SK-14 parabolic model[6], is easier to handle and dazzling is less of a problem. However, the price of about 450€ is too high for households and public organizations in most developing countries.

Another parabolic cooker is the so-called butterfly cooker. It was developed in Tibet and is one of two models used in the region. Made from iron by local artisans, the design has successfully been used for many years. Its bowl is coated with reflective aluminium foil or with small mirrors, which can be replaced when damaged. Iron cookers are more expensive than cement cookers and can only be afforded by better-off households. The aluminium foil has to be replaced every two or three years. They are much heavier than cookers made of aluminium and are pushed around on two wheels fitted to the central support of the cooker. The butterfly cooker is one of the most successful solar cooker models with about 70 000 cookers built in Tibet as stated in a publication of 2004 [7], and their use significantly satisifies much of the overall energy demand of households. According to the Energy Research and Demonstration Center of Tibet Autonomous Region, more than 400,000 solar cookers have been in use in Tibet in 2014.[8] 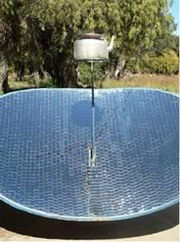 Similar to the butterfly cooker is a model that has a circular bowl made from cement. In Tibet, it is easier to construct, cheaper, and can be afforded by poorer families. This cooker has also been introduced in Afghanistan. The price of the cooker may vary considerably according to the cost of the surface mirrors and the cement. Disadvantages include a bowl that is more prone to breakage and the weight of the cooker (about 60 kg), making transport and handling difficult. Click here for a step by step introduction on how to build the cooker.

Several approaches have been applied individually or in combination to disseminate solar cookers:[1]

So far, state-driven and commercial dissemination approaches have been successful in Tibet and Bolivia, see examples below.

All other strategies have tended to fail for various reasons. In India, household solar cooking was not in line with cooking traditions. In South Africa, a loan system for solar systems could not be established due to lack of interest on the side of the banks and cookers were still too expensive for poorer families. In Burkina Faso parabolic cookers were disseminated using a loan system, but the project suffered from low payback rates. A study has indicated that instalments were unaffordable to poorer families. This demonstrates the dilemma that poorer families, who could make the best use of the solar cooker, are usually not able to afford them. [1]

Examples of Solar Cookers in Use

Complementing devices like heat retainers help to delink the food preparation from the time of sunlight availability: foods can be precooked on a solar cooker and transferred into a retained heat cooker where cooking is finished. Heat retainers also keep the food or water warm until consumption. An impressive example is the use of thermos flasks in conjunction with solar cookers in the autonomous region of Tibet. Alongside solar cookers, families own up to five thermos flasks and store the water heated by the solar cooker during the day. The hot water is used for preparing both morning and evening meals (mainly soup and porridge) enabling the solar cooker to fulfil almost all the household energy needs. However, this represents a rather specific case, which may not be transferable to many other countries.[1] (see also article on Heat Retainers).

In Bolivia, solar cookers were introduced with support from the French NGO ‘Bolivia Inti-Sud Soleil’ using a different approach. Solar cookers, mainly box cookers, were presented in villages during cooking demonstrations. Following this, training courses were offered to those artisans who expressed their interest in cooker production. More than 7000 solar cookers have been built and sold since 2000. In 2011, the project was registered under the Gold Standard in the voluntary carbon market.[13] The success of solar cookers in Bolivia is partly due to biomass scarcity, causing many families to buy gas. An evaluation has shown that using the cooker saves money and a direct relationship exists between the frequency of solar cooking and the amount of money saved by the household. Solar cookers are offered together with fuel-efficient stoves as energy saving technologies.[1][14]

In India, large scale solar cooking in temples, hotels, educational institutions, etc. is becoming more and more relevant and is subsidized by the government. A typical solar steam system (excluding cooking vessels & conventionalboiler) comprising of 96 sq.m of Scheffler dish area (6 dishes each of 16 sq. m) can save around 4,500 liters of diesel in a year. It could pay back the cost in 4 years with support available from the Ministry.[15] One of the largest Scheffler cookers is used in Shirdi Saibaba temple in Shirdi, India. Built in 2010, it consists of seventy-three rooftop-mounted Scheffler reflectors of sixteen square meters each. The system is capable of cooking 40,000-50,000 meals per day. Though the solar steam cooking system cost nearly $300,000, government subsidies reduced the temple’s portion to about $170,000. Liquid petroleum gas use has been cut by roughly 100,000 kilograms each year, for an annual savings of approximately $45,000. The temple should recoup its investment in three to four years.[16]

Another example is the solar park at the base of Mount Abu, a Hindu pilgrimage site, where 35,000 people can be served with food.[17] See also this video by Deutsche Welle.

Basic Rules on Dissemination and Use of Solar Cookers

From the experience of numerous projects that have attempted to introduce solar cookers, the following rules emerge:[1]

Retrieved from "https://energypedia.info/index.php?title=Cooking_with_the_Sun&oldid=387202"
Categories:
Cookies help us deliver our services. By using our services, you agree to our use of cookies.