Guatemala is located in Central America[1]. It shares its borders with Mexico in the north, Belize and Honduras in the east, and El Salavador in the south[1][2]. On the west, the country borders the Pacific, with a much shorter northeastern Caribbean coastline[1][2]. The country's major cities are: Guatemala city -the capital-, Quetzaltenango, Escuintla, Livingston and Puerto Barrios[1]. 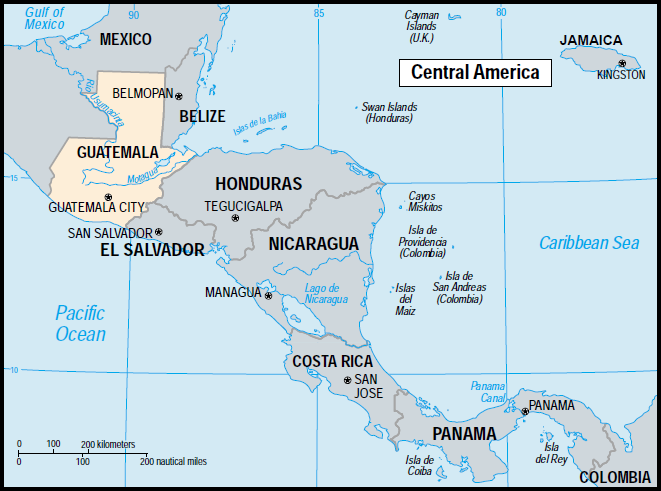 Predominantly, Guatemala is an agricultural socitey, where farming is the major economic activiy, with forestry and mining close behind[1]. The best soils suitable for farming are located on the Pacific coastal line, while the soil in the Peten tends to erode quickly, and highland soils are better protected because of coffee cultivation[1].

In terms of energy, Guatemala comes as the second largest Central American power market, with a total generating capacity of 4.2GW[4]. Guatemala total energy generation capacity in 2016 was 10.9TWh, of which 41% came from fossil-based generation, 24% from large hydro, and 35% was from renewables (small hydro, wind, solar, biomass and geothermal)[4].

Guatemala shows high dependency on firewood, especially for residential demand[5][6]. Though the country has a high potential of natural resources for energy generation and production, with approximately 34% of forestry richness of the total national territory, yet Guatemala still highly depends on hydrocarbons for supplying industrial and productivity sectors[3][5].

Due to this high dependency on hydrocarbons, Guatemala categorizes as a net energy importer[5]. However, the Guatemalan authorities have planned and implemented significant measures to change the country's energy mix, and promote further energy production sources, including renewables[5]. 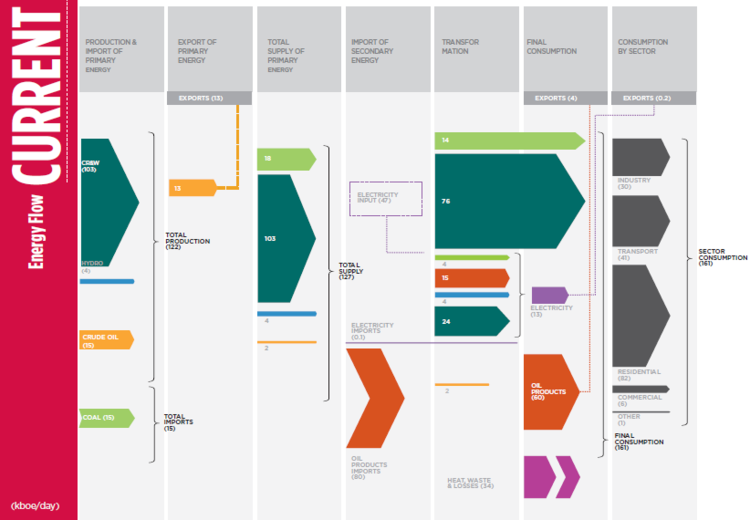 Though firewood represents the main source of energy for household/residential across the country (app. 63%), yet, biomass has started to gain significant importance to meet the continuously increasing energy demand[5]. Thus being encouraged by the domestic investment by local sugar industry, which has started producing biodiesel and energy from sugar-cane pulp[5].

Forced by the continued power supply constraints to meet the increasing demand, the Guatemalan government had to issue more power supply contracts with private companies, which allowed the growth of the installed thermal generation capacity[5]. Thus being nearly 400% during the period 1993-2002, with other facilities being built as well to add more generation capacity to the country's scheme during the same period[5]. Two geothermal-powered plants in particular were installed: Calderas (5MW) in 1998, and Zunil (24MW) in 1999[5].

Guatemala has many natural reserves of both oil and gas[5], yet both are under-utilized. There exist approximately 153 oil wells, however only 58 are currently utilized for oil production[5].

Regarding geothermal potential, Guatemala has 36 volcanoes, which are randomly distributed over an area of about 300km[7]. Moreover, Guatemala has a solar potential of approximately 200TWh[7]. The wind in the country's area is classified as category 4 or higher, implying the country's potential to produce 20000GWh of wind energy annually[7].

Though the country enjoys a wealth and wide varied biodiverse renewable and natural resources, yet they are not yet utilized to their full potential[5][7]. For example; out of possible 5000MW hydroelectric power potential, Guatemala uses only 853 MW (17.06%), and of 1000MW potential of geothermal energy, the country uses just 49.2MW (4.92%)[5]. 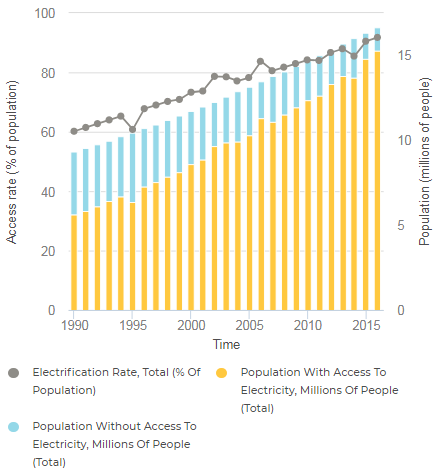 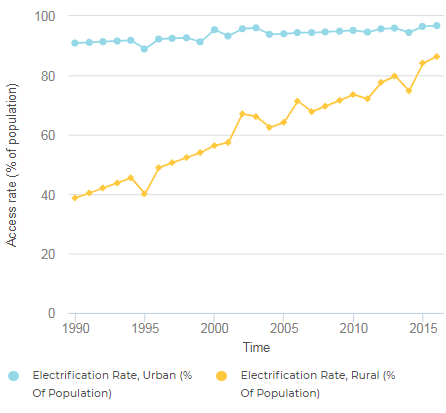 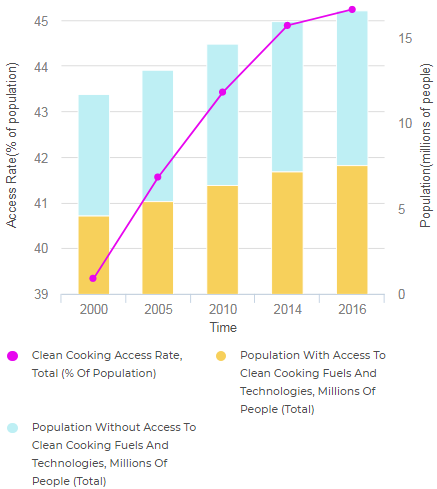 The total installled power capacity of the country is about 4.21GW with renewables representing approximately 32% share[4]. 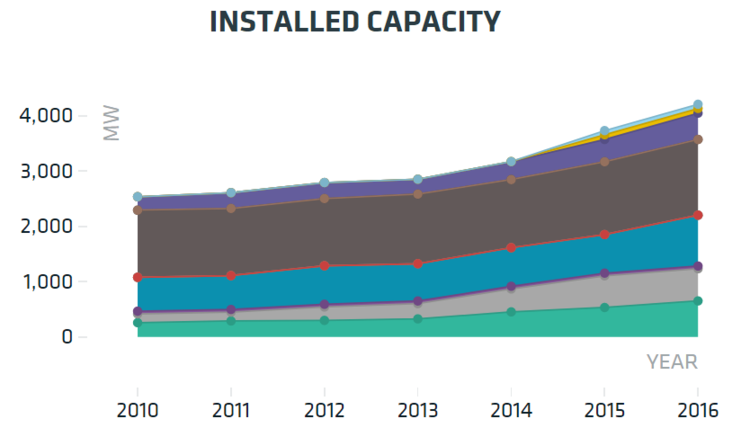 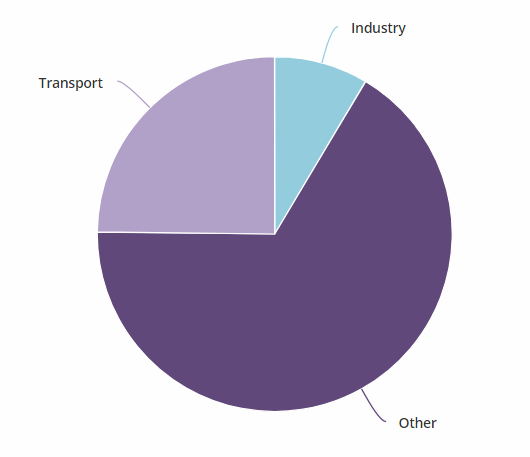 The most recent Guatemalan imports were led by refined petroleum (~10.8%) of the total imports, while petroleum gas represented approximately 1.4%, and coal briquettes about 0.92%[10]. 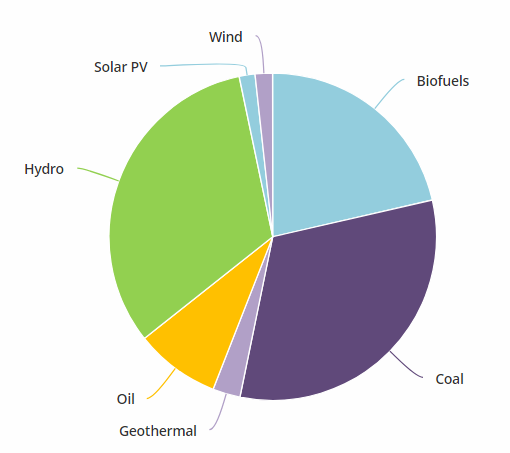 Shares of Different Fuels in Generating Electricity in Guatemala in 2016 (EIA, 2018)

Since Guatemala is a developing country, that is emerging from a civil war which lasted for 36 years, with more than 50% of its population living in poverty, the country faces several social and economic challenges[11]. These challenges cannot be overcome without the improvement of electricity access for supporting basic services and boosting up labor productivity[11]. In that regard, the Ministry of Energy has proposed an expansion of the electricity generating capacity 2014-2028 to meet the increasing energy demand, while reducing dependency on fossil fuels (e.g. oil products), diversifying the energy mix from fossil fuels to renewables, and reducing electricity costs[11].

On one hand, attempting cost optimization in the energy sector could provide opportunities to improve social capital[11]. On the other hand, increasing energy intensity could make societies highly vulnerable to any supply disruption, which demands better strategies for enhancing security of electricity supply[11]. Within that context, energy security is to be defined with accordance to to the electricity supply, taking into account needs and objectives of the country's energy policy[11]. The key aspects of the energy security perspective in Guatemala are: adequacy, resilience and sovereignty[11].

To achieve energy security in the Guatemalan case, few elements should be considered[11]:

With all these factors in consideration, energy security in the case of Guatemala can be defined as follows: "Ensuring the availability of reliable and affordable energy services that are equitably shared, through decreasing dependence on imports, increasing diversity in the system, and increasing reliance on indigenous resources that are environmentally clean to support a sustainable economy able to meet current and future energy demand." [11]
Consequently, this definition reflects both the objects and concerns which are expressed in the Guatemalan energy policy. 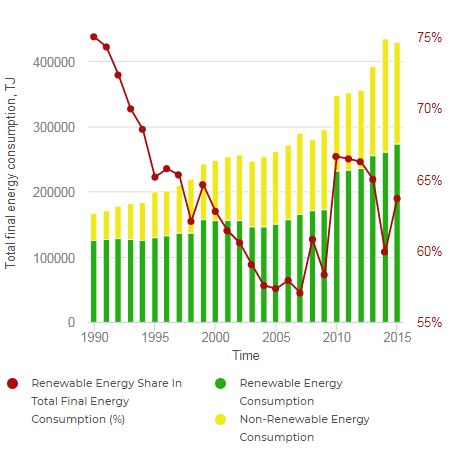 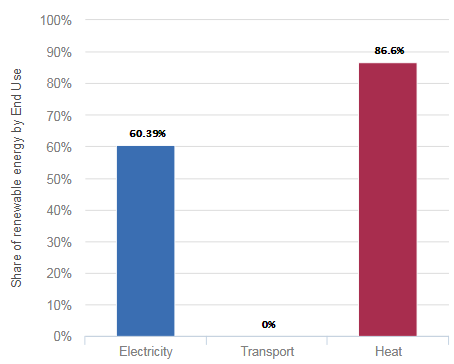 Guatemalan Renewable Energy Share with Accordance to End Use in 2015 (Tracking SDG7, 2018) 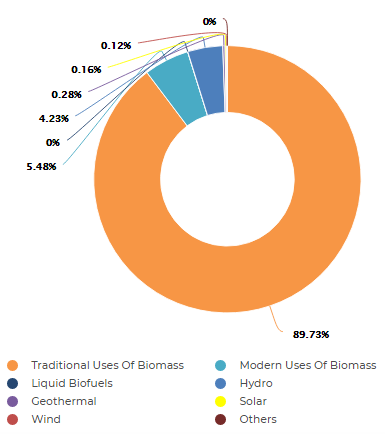 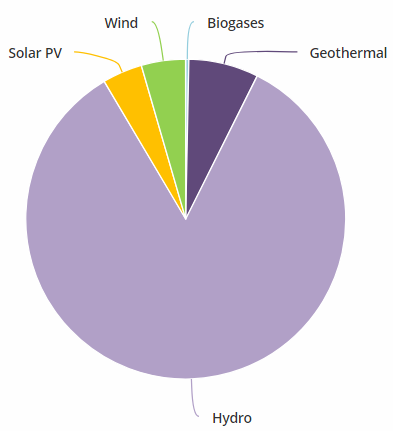 According to the International Hydropower Association (IHA)'s 2017 report on global hydropower status, Guatemala ranks 20th worldwide in the new hydropower installed during 2016 with 163MW capacity added that year[14]. Also the country ranks 6th in the Northern and Central America region with total installed power approximately 1154MW[14].

The country has potential for environmentally-friendly hydropower on different scales: household-scale turbines (100s of Watts), community-scale systems (10s of KWatts) and grid-connected-scale (MWs)[15].

A micro-hydro project of 165 kW, which is located 300km northwest of Guatemala city, was constructed to serve approximately 2500 individuals of Chel, Xesayi and Las Flores[15]. The project was community-built, with each family contributing 80 days of labor between 2003-2007 in exchange for a connection to the system[15]. The power generated of this project was able to turn Chel into a regional hub, consequently pushing small businesses to flourish, such as: butchers, ice factories, blacksmiths and a library[15]. 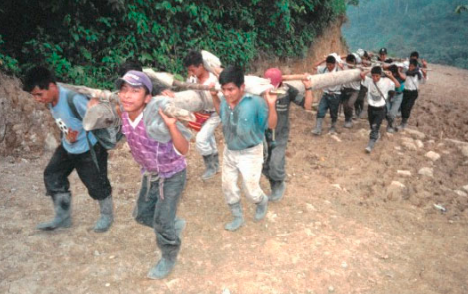 According to the solar maps of Solar and Wind Energy Resource Assessment (SWERA), Guatemala's average solar irradiaion is 5.3kWh/m2/day[15]. 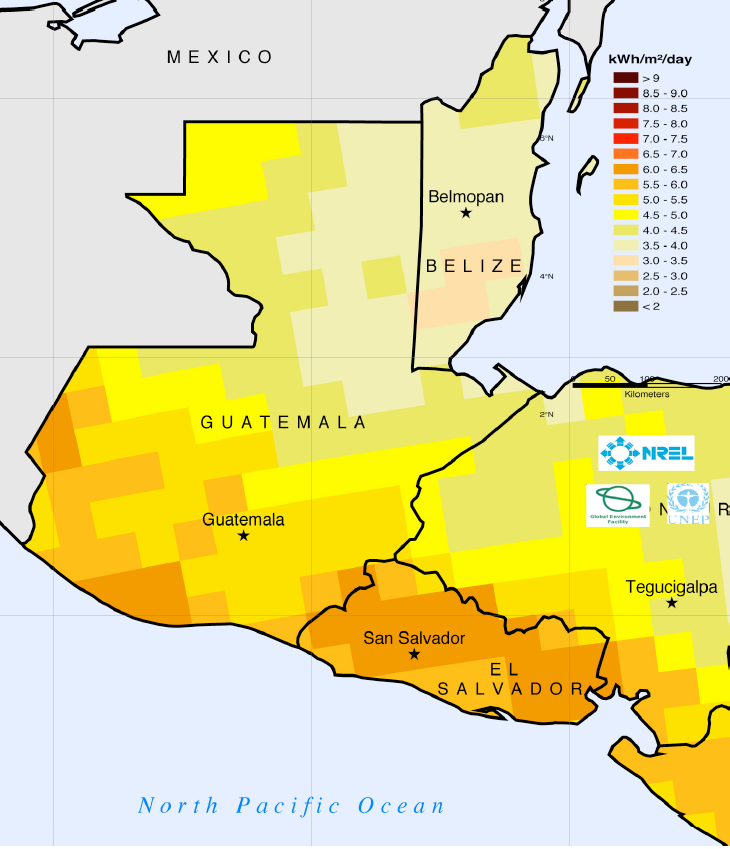 Few small photovoltaic projects have been implemented in several Guatemalan remote areas, which have no access to grid electricity[15]. Back in 2004, USAID has partnered with Fundación Solar and other local NGOs in order to launch 180 photovoltaic projects in six rural communities in the Northern Quiche region of Guatemala for: households, both commercial and community use[15].

During the country's harvest season, which is from November-May, these mills have the ability to generate about 25% of Guatemala's electricity[15]. Thus by burning sugarcane bagasse along with other residues[15].

For firewood, though it is widely used in the country, its energy is inefficiently exploited across rural areas[5]. This is because an estimation of approximately 81% of the households, which use this form of energy, are found to use it in a type of stoves called "three stones stoves", which wastes about 90% of the produced energy[5].

Moreover, it is estimated that about 16 million cubic meters of wood are consumed annually in Guatemala[7]. Another estimation that approximately 60-70% of households cooking with wood lack a sustainable fireplace for the extraction of the produced smoke[7]. Finally, with accordance to the Economic Commission for Latin America and Caribbean (ECLAC), 72% of Guatemala's households use wood as energy source for cooking, which represents a major concern for health damage nation-wide[7].

During the 70s, several international agencies (JICA, IDB, OPEC, ROCAP/USAID, IAEA & OLADE) cooperated with INDE for identifying Guatemala's geothermal resources[16]. In conclusion, it was found that the country has more than 12 geothermal important resrevoirs[16].

Approximate estimates show that the country has a geothermal potential power in the range 400-4000MW, and some literature assume it is 800-4000MW[15][16]. Yet, Guatemala's Ministry of Energy and Mines claims that the economically viable potential does not exceed 1000MW[15]. 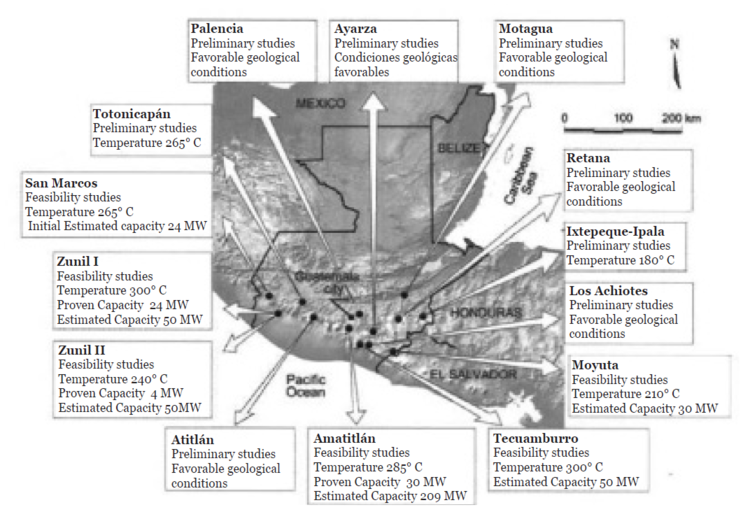 The interest to invest in Guatemala's geothermal potential is on the rise, with 2 geothermal plants are currently operating in the country -and they represent its main geothermal operating resources-: Zunil (24MW capacity) & Ortitlán (25MW capacity)[15][16].

The main barriers for developing geothermal resources in Guatemala[16]:

Crude oil production in Guatemala has high potential, with estimations suggesting the possibility of reaching 50000 barrels/day[18]. Main Guatemalan products in that regard are: 'heavy crude oil' with API gravities 10-22.3 & 'bitter' with Sulphur percentages > 1%[18].

The Guatemalan petroleum products are mainly exploited for the purpose of heat generation for both industrial and transportation sectors[7]. 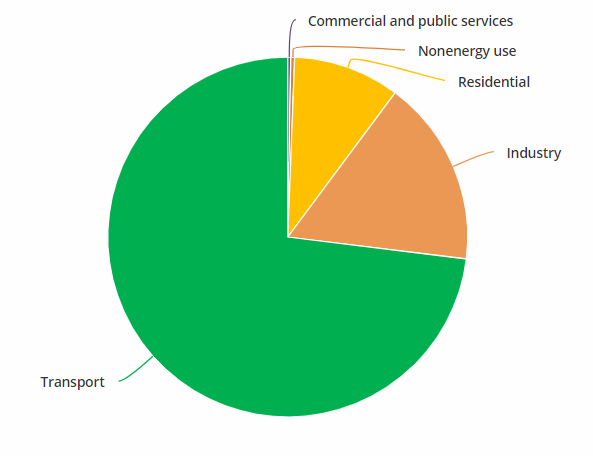 By the year 2013, Guatemala's Ministry of Energy and Mining has reported that the country's total production of oil was approximately 4 million barrels, with an average of 9986 barrels/day[18]. Though, the evolution of hydrocarbons in Guatemala still have a high potential, as several studies -conducted by different institutions- have shown that Guatemala has oil reserves with the capacity of 83 million barrels[18]. Furthermore, some indicators have shown that the country's capacity of oil reserves could be yet up to 750 million barrels[18].

A central challenge for the whole region is assuring an environmentally-friendly and sustainable provision of the energy system, along with meeting both the social and economic objectives of each country[19].

Read here how energy security is linked to the dimensions of sustainability.

The Ministry of Energy and Mines (MEM) is the sole state body that is responsible for both the development and coordination of policies, plans and programs related to the Guatemalan energy sector[6]. The main responsibilities of the Ministry are[6]:

This sub-sector is defined and regulated as shown in the following table:

On the international level, the State of Guatemala has signed and ratified several legal instruments for: environmental regulations, the protection of social and economic rights[7]. Consequently, these instruments would participate in the creation of the energy policy framework, plus identifying and guiding the implementation of its actions[7].

The list below summarizes these international instruments affecting the Guatemalan enegy sector[7]:

Moreover, there is also a couple of regional legal instruments, which are noteworthy for energy sector compliance[7]:

The following national legal instruments are important for enhancing the promotion of social dialogue processes within the energy sector[7]:

Furthermore, the following national policy actions play a vital role for accomplishing the objectives and goals of this policy[7]:

The Guatemalan energy sector has four fundamentally relevant state actors[6]. And since the country is one of few ones in Latin America that allows private companies to both extract and sell hydrocarbons, hence there also exist a number of significant participators[18][6]. 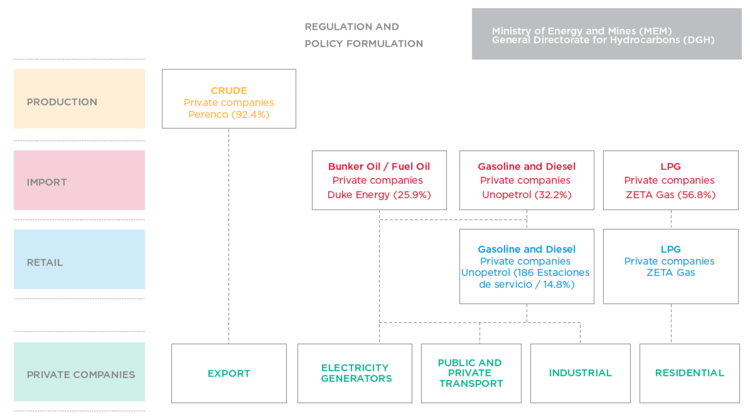 Guatemala has 44 private plants, which are together managing 76.7% of the country's installed capacity[6]. The private sector also effectively participates in the Guatemalan national transmission sector, by managing 15% of the country's high voltage network[6].

In the distribution sector, three major companies are responsible for approximately 84% of the total national coverage, serving about 2.4 million users, while other 15 municipal companies provide the service for 205000 usres[6][7]. 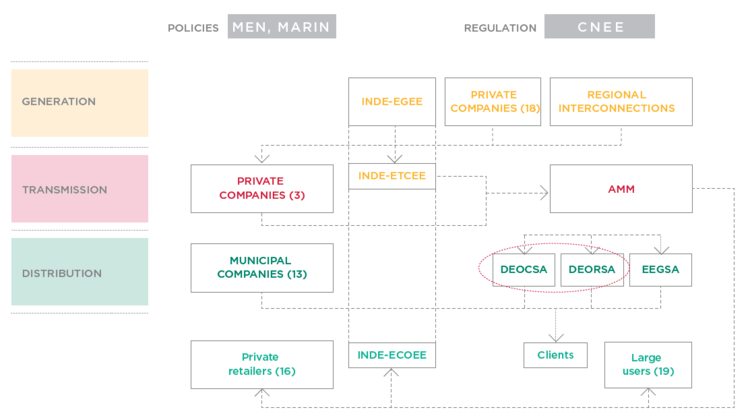