Namibia lies in the southern part of the African continent. It borders the Atlantic Ocean to the west, Angola to the north, Zambia to the north-east, Botswana to the east, and South-Africa to both south-east & south.

The country is also on the top 10 listed countries, which are in possession of uranium resources worldwide, and it solely supplies about 8.2% of the global uranium production[3].

A 2019 report identifies that by 2030 still 36% of Namibians will still not have access to modern energy under the Business-as-Usual (BaU) (= "New Policies" Scenario of the International Energy Agency’s World Energy Outlook 2018), while 32% will have access to the grid, 11% to a mini-grid and 22% to a SHS. The investment needs in a BaU scenario are higher (and emission reduction potentials lower) compared to a progressive Off-grid scenario (lower TIER case). That scenario estimates the impact of fully favourable off-grid (Mini-Grid and Solar Home Systems) frameworks through the integration of maximized ESMAP’s RISE Indicators into the model’s calculations. Under that scenario, Namibia would be electrified solely by mini-grid (43%) and SHS (57%). While the investmes needed for a higher Tier case are estimated as 600 million USD (prOG) compared to 400 million USD for the BaU, for a lower TIER case investments are even lower in the proOG (220 million USD) compared with almost 300 million in the BaU. (The GHG emissions are in both cases less than half of the BaU.)[6]

Namibia's average consumption rate surpasses 3000 GWh/year, while its generation capacity is around 1305 GWh/year[1]. Therefore, there is a supply gap, which is covered by importing power from South-Africa, Zambia, and Mozambique[1].

Most of the final consumed energy goes to the country's transport sector[1].

​The Ruacana hydrowpower plant is a run‐of‐river station. The amount of power generated depends on the water flows from Angola. In case of insufficient flows, power generation is low.

28% of Namibia's generated electricity come from fossil fuels, while 64% are from hydropower, and about 8% come from renewables[4].

Non-electricity off-grid renewable energy projects include the small/ micro wind energy installations used for water pumping, which are very common in Namibia, especially on farms. This technology has been used successfully for decades, with about 30,000 wind- driven water pumps installed in the country as of 2005; however, the current trend is to replace these with solar energy sources.[8]

The solar conditions in the Namibian region are to be considered of the best worldwide for solar generation[1][2]. The country's average high direct solar insolation is 2200 kWh/m2/year, with a cover of minimum clouds[1][2]. The southern region of Namibia experiences -on average- 11 hours of sunshine/day, and an average direct solar radiation of 3000 kWh/m2/year[1]. With these conditions, Namibia has a huge potential for installing solar water heaters, solar photovoltaic (PV) systems, and concentrated solar power (CSP) plants[1].

Namibia's most common PV technology application is solar PV-based pumping, which is mainly used in cattle farms[1]. Secondary solar applications in the country would be rural electrification, powering radios, lighting, TVs, and fans[3].

EEP Africa supported a very successful biomass energy project that is harvesting invader bush – which covers substantial areas of northern Namibia – for use in a steam boiler. The project, Combating Bush Encroachment for Namibia’s Development, has installed a 250 kW bush-to electricity gasification pilot power plant on a commercial farm in the heavily bush-infested Otavi area. The plant, which was not yet operational as of mid-2018, is considered as a proof-of-concept project to determine the financial feasibility of this approach, assess the robustness of the technology and establish Namibia’s first IPP.

Liquid fuels in general, and oil in particular are widely used in Namibia's both household and industrial sectors[10]. Diesel and petroleum are the most used liquid fuels in the country, especially in the transport sector (~63% of Namibia's total consumed energy)[10].

Namibia uses coal solely for generating electricity, thus through the country's only coal-powered station (Van Eck Power Station)[10]. All the coal used in Namibia is imported, and it mostly comes from South-Africa[10].

For Namibia to develop its energy sector and achieve energy security for the decades to come, some challenges need to be mitigated and handled properly at the first place, from which some are listed below[11][2]:

is a 20 year programme aiming to provide access to appropriate energy technologies to communities living in off-grid areas, through:

"Fourteen Energy Shops are located in different regions and their primary function is to stock and sell suitable and approved energy products and compatible appliances. Public institutions such as clinics, schools and police base stations falling under the domain of OGEMP are electrified by government with 288kWp containerized stand- alone systems and large decentralised hybrid systems."[16]

Loans to households "at a favourable interest rate of 5 percent during the loan period of five years. The maximum loan amount is around US$ 2,600 for solar water heaters, between US$ 530 and US$ 3,100 for solar home systems and US$ 4,400 for solar water pumps. Uptake of the loans has been high, and the fund has not been able to keep up with the demand. More than 1,000 systems of varying sizes have been installed through the SRF, and a repayment rate above 85 per cent has been reported."[14]

According to the REN21-SADC Renewable Energy and Energy Efficiency Status Report (2018), the challenge in Namibia is to provide electricity access to the 79% of the rural and sparse population that does not have access by establishing feasible and maintainable off-grid solutions. The Rural Electricity Distribution Masterplan 2010 prioritises 2,879 rural localities to be electrified in the next 20 years and identifies 27 localities for off-grid electrification (including via renewables); however, implementation has been limited.[19]

So far the country has developed several pilot mini-grids, including three off-grid systems: Gobabeb, Tsumkwe Mini Grid and Gam Solar PV Mini Grid. In rural and remote areas where neither the main grid nor mini- grids are available, consumers depend on stand-alone electricity sources, mainly diesel generators. The use of solar technologies has been increasing, and hybrid solar/diesel systems have proved to be technically sound off-grid solutions.[20]

There are about 50 solar technology companies.[15] „The number of local, established renewable energy companies in Namibia is low. Most companies focus on project development, engineering-procurement-construction (EPC) activities and installation of photovoltaic and solar thermal solutions. The established, local companies, some of which have been active in the field of renewable energies for more than 10 years, generally have sound know-how and technical understanding. As there is no formal training in the field of renewable energies in Namibia, employees are individually trained by the companies. Thus, the quality and the level of education of local companies and specialists can vary considerably.“[21]

They list 4Namibian Distributors with email, two of them from South Africa(13 April, 2017)

The Desert Research Foundation of Namibia was established to support research but also to address sustainable development throughout arid lands. The DRFN tackles issues ranging from water to energy to land from a human and a basic biophysical perspective, as well as undertaking awareness and capacity building necessary to support this approach.

Elephant Energy has worked with partners including the Peace Corps and World Teach to identify schools in the north eastern and central regions of Namibia that are in need of lighting resources and can act as reliable stewards of the libraries for years to come.  Thus far, EE has distributed more than 800 lights allowing 6,500 learners access to light. Elephant Energy has more than 40 Sales Agents through Namibia. https://www.elephantenergy.org/v2-sales-agents

(no information about them yet)

„There is not a great deal of donor related activity being implemented in Namibia, with the exception of the regional programmes being implemented. KfW Bank, AfDB and the Green Climate Fund (GCF) are providing large-scale fi-nancing and the UNDP, World Bank and GIZ are involved in the development of energy resources for Namibia. GIZ is particularly focused on developing biomass using the invader bush that has proved to be a hindrance for Namibian farmers. The EU has supported some projects under its climate change programme and supports the installation of solar water pumps for farmers.“[14]

Implications for the Theory of Change: „Small-scale IPP projects are bankable despite the lack of government guarantees due to a general market confi-dence in the stability of Nampower and the government. However, currency fluctuations and the devaluation of the Rand appear to affect private sector willingness to take loans geared to foreign currency. The continued expansion of small-scale, renewable projects may not be promoted by ECB in the short term due to difficulties in managing the variable supply from renewable energy IPPs and the current supply infrastructure. Developing bankable off-grid projects is challenging in Namibia due to the absence of an economy of scale. There is potential in peri-urban areas, which would then satisfy the TOC however this would require a change of regulation to allow for the direct distribution to local customers. Rent-to-own business models, such as those of Mobisol and Off:Grid Electric may be more suited to this context, although there may need to be guarantees in place if the grid were to be extended to these areas.“[14]

[edit] Past and current involvement of donors

"The Global Environment Facility (GEF) has been the biggest and most consistent donor in Namibia’s Climate Environment Energy fraternity. As mentioned in section 2.2, Germany has been the mainstay bilateral donor for CEE since Namibia’s Independence. The following CEE projects are active:


The Annex 11: Namibia’s energy generation and access situation – financing and investments lists a total investement of 101,426,307 USD by 5 private entities, 2 state-owned entities (larges share by the Development Bank of Namibia) and the micro-medium lender Kongalend.[23] 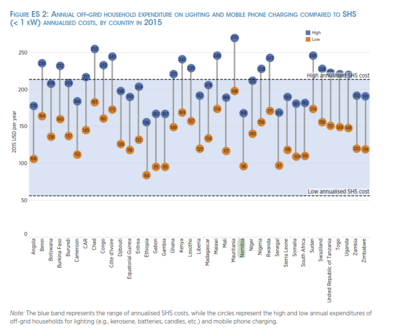 In Namibia, household spend between 96 and 168 USD(2015) for energy espenditures. This is well within the range of the annualised SHS costs range between 50 and 210 USD(2015). In other countries the costs  may exceed the households' expenditures.[25]