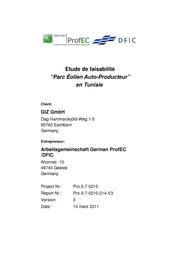 The objective of the study was to analyse the technical and economical feasibilty of a 60 MW or 120 MW wind farm at the site of Thala in the east of Tunisia.

So far, only approximately 3,5 MW of PV systems on solar roofs have been installed (2013). Besides, Tunisia is currently revising its Solar Plan with the goal of accelerating set goals and facilitating legal procedures. In addition, decisions on the future electricity mix for Tunisia are expected for the coming months, which may imply PV installation goals of ca. 2 GW by 2030 depending on the chosen scenario. To foster the PV development in the residential sector the project PROSOL-ELEC has been implemented in Tunisia. This includes a grant from the National Fund for Energy Conservation (FNME) representing 30% of the investment costs of the PV system and a ceiling of 2,300 TND per kWp. Further incentives include the provision of a credit for the PV system.

However the quantity and quality of organic material (e.g. sewage sludge, animal excrements, residues from olive oil production) would allow for a significant production of biogas, which than can be transformed to electricity or used for thermal application.

Energy Efficiency in the Water Sector

The Tunisian public water supplier SONEDE (Société Nationale d’Exploitation et de Distribution de l’Eau) has some 1300 water pumping stations. Electricity consumption of the pumping stations is substantial with the biggest stations consuming more than 1 GWh of electricity per year. Within a cooperation between SONEDE and GIZ-ER2E the most promising energy efficiency measures were analysed.