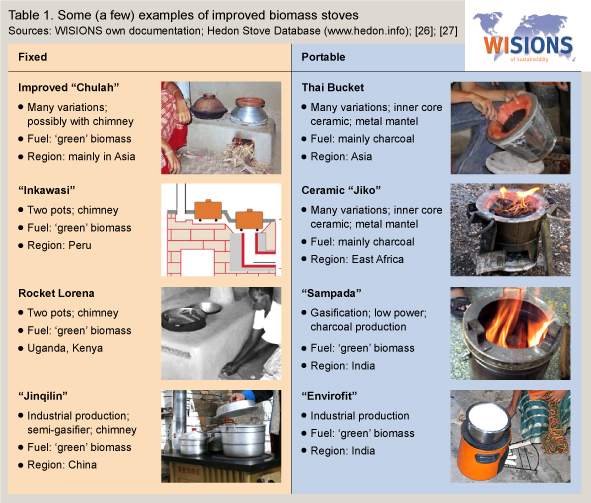 Newly designed stoves that improve the combustion of biomass, are therefore much more energetically efficient and can reduce the pollution of indoor areas significantly. As this technology is comparably cheap, easy to manufacture and handle, it is the most accessible option for many households in developing countries. The design (i.e. the size and dimensions of the combustion chamber) of an improved stove depends to a great amount on what biomass is used to fire the stove. Therefore, there are many different designs suitable for burning almost all kinds of solid biomass. The type of fuel available in a region determines the types of stoves to be promoted. Through the use of more efficient stoves, the pressure on valuable biomass resources can be reduced. An interesting new aspect is the development of so called “micro-gasification” i.e. applying the principle of gasification for cooking. This technology provides significant advantages: different kinds of biomass residues, which are not traditionally used as fuel for cooking, could be used through new treatments; the process can be more efficient and cleaner compared to the direct combustion of biomass; and it offers the option to generate (bio-) charcoal as a by-product which serves as a substrate for soil recovery or enhancement. 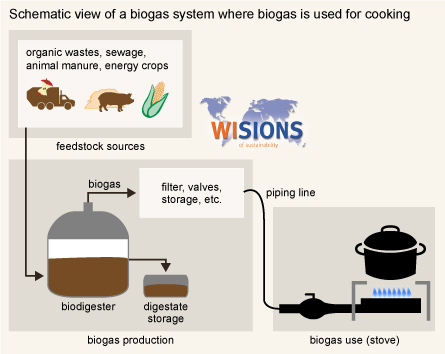 Diagram showing the structure of a biogas system with an attached stove, © WISIONS

These stoves use biogas as fuel, which is a gas mixture containing methane and can be generated by anaerobic digestion. Where fenced animal husbandry and cattle is existent, they are used under the best circumstances. The production of biogas is a relatively complex process, in which biomass such as dung and manure is converted into biofuel. The use of the biogas for cooking or baking is comparatively easy. The anaerobic digestion is the key process. The optimal production of biogas depends on various factors, which, if neglected, can significantly reduce the generated amount of biogas. Generally, the users of a biogas combustor generate their own biogas by using available organic waste. To do this properly, regular feeding of the combustor is necessary. That means that users have to change their traditional practices under certain circumstances, for example from nomadism to agricultural business.

Solar cookers use the radiation of the sun to heat and boil food. The technology can be used best in regions where it is very dry and high levels of sunlight can be expected. To ensure the best implementation of these cookers, local cooking habits and social conditions must be taken into account. There are many different forms of solar cookers and most of them follow three basic principles:

2a) Natural Air Convection uses the chimney effect to create a flow of dry air; it is very simple and cheap but only allows small quantities of fruit to be dried at a time; the flow of the air cannot be effectively controlled and the drying process is slow

2b) Forced Air Circulation uses an electric fan to create a flow of dry air; it is clearly more expensive and more difficult to operate, but permits a greater amount of control over the airflow and shorter drying durations

Thermal refrigerators can also use heat generated by biogas to operate. When doing so, they need about 3000 liters of biogas per day.

Retrieved from "https://energypedia.info/index.php?title=Renewable_Energy_for_Food_Preparation_and_Processing_-_WISIONS&oldid=356623"
Categories:
Cookies help us deliver our services. By using our services, you agree to our use of cookies.