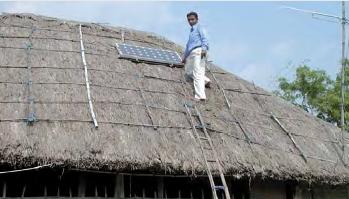 How Teddy’s Tailoring Business Was Re-ignited by Solar Lighting, provided by Fosera’s partner in Zambia VITALITE
After more than two decades spent building up a loyal customer base, Teddy Hangandu, a tailor in Lusaka’s Luangwa Compound, found himself falling into a slump.

“Before I bought the solar lights, I used to find it hard to work at night. This resulted in not meeting customer deadlines especially when you have a number of customers.” -Teddy Hangandu

If you are living in a house without power, work comes to a standstill once the sun goes down. But Teddy’s clientele wants their clothing when they want it, sun up or sundown. With this in mind, Teddy tried using paraffin lamps at nighttime, but this wound up costing him K50 (about 2.80$) a week on fuel.

Aware of these dangers and unhappy about spending money on fuel instead of more valuable activities, Teddy vented his frustrations to a friend. Luckily, his friend, a VITALITE customer, introduced him to the fosera SPARK – a product that is particularly adapted to the needs of people with limited or no access to grid electricity in Zambia. 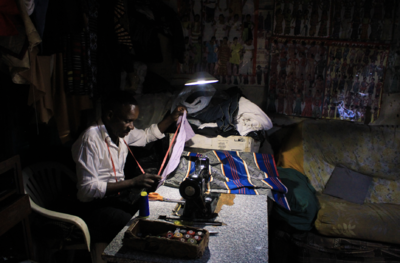 The fosera SPARK, built on a Pay-As-You-Go basis, comes with three lamps that last six to eight hours when fully charged and three years warranty. Because of these extended hours, Teddy went from serving 10 to 15 customers a week to a booming business with 20 to 30 customers a week. He no longer turns away last minute clients and has increased his turnover.

Outside the long-term positive impact on the environment, the FOSERA solar system has helped Teddy save money. The increase in sales means he can better support and provide for his two orphaned grandchildren.

“Instead of spending a K50 a week on paraffin, I now put that money into my savings account so I can buy a plot.” -Teddy Hangandu

His advice for small business owners still reliant on candles and paraffin lamps is to make that switch and join the VITALITE family. He is no longer pressured to turn away clients or only work in daylight hours. He no longer worries that a clumsy grandchild might knock over an oil lamp and burn the house down. More importantly, the FOSERA solar system has and will continue to save him money in the future.

In 2018, Fosera Solarsystems GmbH & Co. KGaA, together with the Zambia-based partner company Vitalite, won the German Sustainability Award in the Corporate Partnerships category. The partnership between the two companies exists since 2013. Fosera develops and produces solar systems while Vitalite takes care of sales and service in Zambia. On the one hand, Vitalite benefits from the cooperation because it receives high-quality systems, customer-specific product developments and technical support. Fosera, on the other hand, receives direct feedback from Vitalite and the end customers on site. Around 120,000 Zambians are Vitalite customers and have gained access to sustainable and economical renewable energy through Fosera. Around 7,000 people in Zambia were even able to increase their income with the help of Solar-Home-Systems.[2] 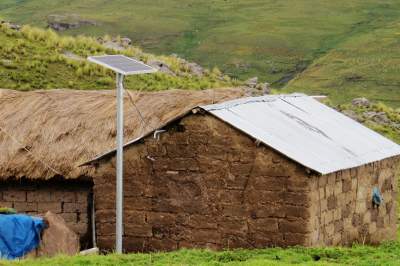 A rural household from the Andean region of Cuzco uses a SHS. 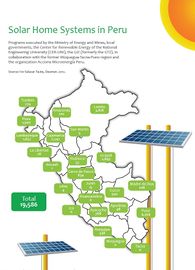 In 2010 and 2011, public institutions, from the MEM to district municipalities, invested about 5 million Peruvian Nuevos Soles (about 1.9 million dollars) in new projects and it is expected that this year investment will continue to grow, bringing renewable energy to the forefront in rural areas, which will aid its development.[3]

So called "Balkonkraftwerke" (literally meaning: energy-producing systems for your own balcony) are small solar home systems producing electricity. Legal installation has been made considerably easier by a new VDE guideline in 2017[4] (which came into force in 2018). Since then, private users have been allowed to put systems into operation themselves as long as they do not generate more than 600 watts of power and register the system.

However, there are still legal grey areas that have not yet been finally clarified, e.g. whether the generated electricity has to be fed in via a special energy socket (Wieland) or whether a normal socket (Schucko) is sufficient.

Retrieved from "https://energypedia.info/index.php?title=Solar_Home_Systems_(SHS)&oldid=384064"
Categories:
Cookies help us deliver our services. By using our services, you agree to our use of cookies.