The Links between Energy & Food

By 2050, a world population of 9.7 billion is expected – 2.5 billion more than today. This will increase the current food demand by 58-98 percent[1]. Considering the limited energy and water resources on our planet, meeting this target is one of the century’s biggest challenges. Additionally, the demand for processed food, meat, dairy and fish adds further pressure to the food supply system, while climate change limits productivity. Finding solutions for climate friendly and resilient agriculture is crucial to ensure food security.


The agricultural and food sector contributes significantly to global energy consumption and thus, greenhouse gas (GHG) emissions – according to the Intergovernmental Panel on Climate Change, agriculture, forestry and other land use activities (AFOLU) accounted for 23% of the total net GHG emissions between the years 2007-2016. This does not include all sectors related to food production, neither pre- and post-production activities nor production activities like the heating of greenhouses nor emissions from fisheries. When added to AFOLU emissions, the estimated share of food systems in global anthropogenic emissions reach up to 37%.[2]


Further, the agricultural and food sector consumes 70 percent of all freshwater resources. While a major contributor to GHG emissions, the sector is also strongly affected by the impacts of climate change. Extreme weather events and diseases are reported to negatively affect agricultural production: for example, by 2030, a 30 percent increase in crop disease in maize production is expected in Africa, and a 10 percent increase in crop disease for staple crops in Asia due to climate change. At the same time, a lack of energy access impedes the preservability of food, with one third of food produced being lost or wasted, at least partly because of missing cooling facilities. 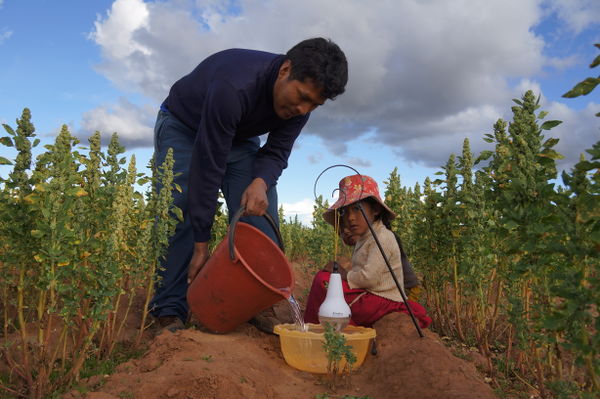 In order to avoid or minimize climate change related losses, adaptation measures will be on the agenda of farmers in most affected areas. Enhanced resilience will be possible by:

At the same time, more production growth needs to be achieved without further increasing GHG emissions. However, direct and indirect energy inputs are still necessary in agricultural value chains to maintain or increase productivity, which is why energy efficiency measures and renewables are critical within approaches for climate change mitigation.


Sustainable energy for agriculture is a high impact opportunity, which promotes a nexus perspective with a focus on energy actors. Addressing nexus challenges through new technologies and infrastructure will help decoupling production growth from increased use of fossil fuels and water resources, ensuring climate change mitigation and food security at the same time.


The Energy-Food Nexus embraces cross-sectoral, synergetic perspectives for regulating competing uses of water, land and energy-related resources in a climate change context. Achieving universal access to food, drinking water and modern energy within the planetary boundaries requires consideration of the interconnection, the vulnerability and the finiteness of natural resources within the policy and regulatory frameworks, the governmental planning mechanisms, the production processes and the consumption patterns. Read more ...

Retrieved from "https://energypedia.info/index.php?title=The_Links_between_Energy_%26_Food&oldid=310586"
Categories:
Cookies help us deliver our services. By using our services, you agree to our use of cookies.