Due to its geography Peru possesses abundant wind energy potential. Mainly along the coastline and the primary mountain range there are wind speeds of 7.5 m / s and more (at a height of 80 meters) which enable an economically viable utilization. The regions with the most abundant wind energy potential are situated in the North at the coast as well as in the Andes and around Ica south of Lima. In the west of the Andean Mountains and towards the Amazon basin there is hardly any wind potential. The overall potential of onshore wind power is estimated at 77 GW in the wind atlas published at the end of 2008[1].

The technologically feasible potential for electricity generation is officially estimated at 22 GW by the Ministry of Energy and Mining of Peru (MEM[2]). This is based on a study for the Wind Atlas for Peru (Atlas Eólico del Perú) issued in November 2008 which by means of about 30 measuring stations established an overview of the Peruvian wind power potential. Since large scale experience on the utilization of wind power is not existent yet and precise measurements at certain project sites have not been conducted yet, the actual values might differ. The potential for offshore wind power along the Peruvian coast has not been researched yet in depth.


Out of the 25 regions of Peru nine show a wind power potential worth mentioning. The following table shows the regions with a wind power potential of more than 1 000 MW and the respective utilizable wind power. The table clearly shows that the highest yields are achievable at the coastal regions of Piura in the Northwest and Ica in the South of Lima. The third most promising region is Cajamarca in the northern Peruvian Andes. 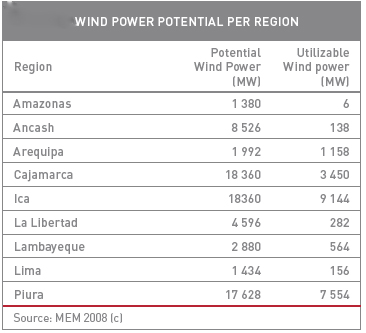 Regarding small scale wind power applications several small wind turbines are in operation mainly in rural areas for water pumping, irrigation and battery charging. The use of wind energy for water pumping has been taking place traditionally in the North of Peru. As far as large scale wind installations are concerned, two turbines were installed in the late 1990s, but there was no further development of wind power utilization until 2007. However, since then a rush for temporary concessions has taken place to secure attractive potential wind farm sites adding up to a total capacity of more than 10 GW[3]. The following Table shows the number of projects with temporary licenses per region. 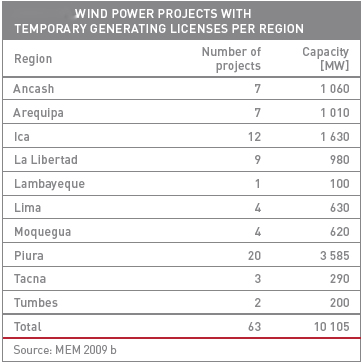 The planned capacities of the wind parks range from 40 to 300 MW. It is important to emphasize that all the temporary concessions obtained so far are for sites close to the coastline because access is easier and wind turbines can be delivered by sea vessel.


Taking into account the large number of projects and the overall capacity it is interesting to note that the government plans the first tender to be held for a maximum of 500 MW (for all renewable energy sources). Furthermore, the concessions are only valid for two years; this means that there will be fierce competition for the promotional RES contracts. Additionally, the above numbers imply that almost half of the utilizable wind energy potential of 22 GW has already been secured by the temporary license holders.


There are eleven companies holding temporary concessions. The company that has obtained most of them is Ibero Peruana Inversiones (22 contracts). The other concession holders are Norwind, Huayra Kallpa, Energía Eólica, Gaz & L’Energie, Generalima, Inversiones Troy, Petrolera Monterrico, Perú Energía Renovable, Soleol and Sowitec Energías Renovables de Perú. According to the Peruvian Renewable Energy Association (Asociación Peruana de Energías Renovables - Apeger) wind energy could amount to a total investment of over one billion US Dollars in the medium term.


In order to be able to define grid connection and grid integration conditions for wind energy, the Comité de Operación Económica del Sistema Interconectado Nacional (COES) is currently conducting a study which will also define the maximum capacity of wind power which could be connected to the Sistema Eléctrico Interconectado Nacional (SEIN) without disrupting network operations. This is the prerequisite for a possible tender by the government. It is obvious that in a country with a maximum demand of 4 200MW the short term possibilities for the connection of wind turbines to the network are limited.


After several postponements, it is now expected that towards the end of the year 2009 a tender for wind power will be held by Organismo Supervisor de la Inversión en Energía y Minería (OSINERGMIN). In this tender only companies which hold a temporary concession and which can guarantee a certain amount of financing are allowed to take part. However, so far it is not clear how much capacity will be allocated to wind power concessions. The prerequisites, as well as the terms and conditions of the tender will still need to be addressed. It is expected that about half of the projects with temporary concessions will take part in the public RES tender. 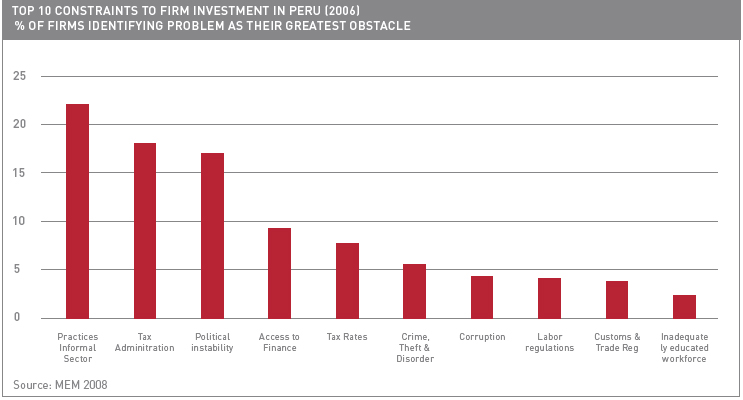 Constraints to firm investment in Peru 2006.jpg
Regarding electricity generation generally every company can apply for a generation concession according to the LCE. However, since the wind energy market prices are not sufficient to cover the costs, one would need to win the RES support as outlined in Law N° 1002. As stated, renewable energy generation capacity totalling up to 5 % of the overall capacity (~500 MW), which compared to the potential is only a fraction of the possible amount.