Zimbabwe is a landlocked country located in southern Africa, between the Zambezi and Limpopo rivers. It shares its borders with Zambia to the northwest, Mozambique to the east, South Africa in the south and Botswana in the southwest. The capital city is Harare. Much of Zimbabwe is elevated in the high veld/central plateau that stretches from the southwest to the northwest at altitudes between 1,200 and 1,600 meters. The world’s largest curtain of falling water the Victoria Falls is located in the northwest of Zimbabwe[1].

Zimbabwe relies on hydroelectric power. In rural parts of the country, 80-90% of the people depend on wood fuel and kerosene for cooking lighting. Food processing tasks like milling grain are usually carried out with diesel-powered system[2].

Total electricity generation in 2009 was 7,900 gigawatt hours (Gwh). 53% of this was produced from renewable sources. Electricity consumption per capita in 2009 stood at 1,022-kilowatt hours (kWh). 33.9% of this total installed capacity was from hydroelectric plants. 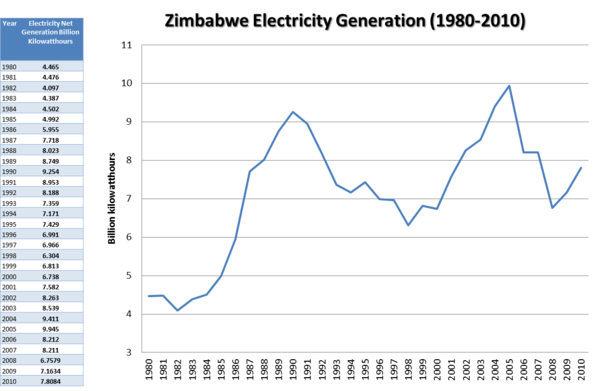 The energy supply options fro Zimbabwe have a mixture of hydroelectricity, coal and renewable sources. The grid is well developed with efforts after 1980 having extended supplies to rural business and government administrative areas[4].

Much of Zimbabwe's electricity is produced at the Kariba Dam Hydroelectric Power Station (about 750 MW), at Hwange Thermal Power Station which has an installed capacity of 920 MW, and at three minor coal fired stations.

Apart from the Kariba Dam Hydroelectric Power Station, there is still quite a lot of hydropower potential especially along the Zambezi River. Solar Power has enormous potential both in small and large scale. Wind and biogas energy are other possibilities[5]. 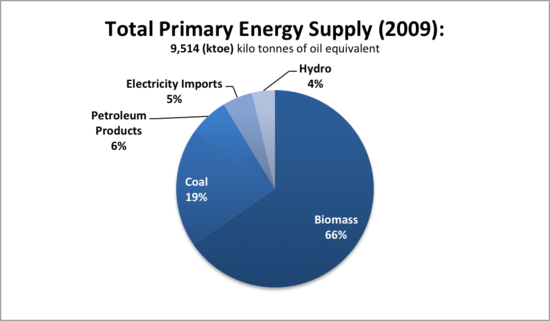 Zimbabwe has a hydropower potential of 18,500 GWh a year, of which 17,500 GWh is technically feasible. To date about 19% of the technically feasible potential has already been exploited.
Rusitu Hydro, a mini hydro plant of 750 kW operated privately sells power to the state-owned company, Zimbabwe Electricity Supply Authority Holdings (ZESA). The government is also planning to add a further 5 MW of small-hydro. About 8 small-hydro plants are currently installed, ranging from 3 kW to over 700 kW. The total potential of small-hydro in Zimbabwe is estimated at 120 MW. Gairezi, which is located in the Nyanga district is particularly promising, with an estimate 30 MW of potential capacity[2].

The average solar insolation in Zimbabwe is 5.7 kWh/m2/day. There is an enormous potential for use of solar PV and solar water heaters that has not yet been exploited. Technically, solar PV has a potential of 300 MW. At present only 1% of the technical potential for solar water heaters has been exploited. Solar power is mostly installed in rural areas of Zimbabwe at service centers such as schools, clinics, police stations and hospitals. However, the private home market for solar is growing. Solar-powered ‘base stations’ for charging electrical appliances have also been installed through the national telecommunications company NetOne.[2]

Biomass accounts for about 66% of the energy use. Fuelwood is the most important domestic fuel in the country. It is the major source of energy for cooking, lighting and heating for over 80% of the population mainly in the rural and peri-urban areas[4].

The potential of bagasse/co-generation in Zimbabwe is estimated to be 633 GWh, particularly from sugarcane. There is also the potential for power generation from wood waste generated from the timber industry with over 70,000 tons of biomass waste each year. In the long-term, this figure is projected to double by 2015. At most large timber mills, only a small fraction (~10%) of wood waste that is generated, is currently consumed in process steam boilers for lumber drying kilns, while the vast majority is burned in the open air or dumped. It’s estimated that at least 4 MW of power could potentially be generated from waste that is produced from large mills.

More than 200 biogas plants have been installed in Zimbabwe, mainly by the Department of Energy. (African Energy Policy Research Network (AFREPREN)[2].

There is also great potential for generating electricity sing biogas from animal waste due to the large population of livestock in Zimbabwe.

In the south of Zimbabwe, there are 2 sugarcane-crushing mills that use more than 1.3 million tons of bagasse for electricity generation for the sugar factories.

Zimbabwe has a target of substituting 10% of its fuel requirements by 2015 through biofuels. The plans to meet this target are through expanding sugar cane growth for ethanol production, expanding Jatropha growth (by planting 122,000 hectares), and constructing a 500 million-liter/annum ethanol production plant that is currently implemented under a public-private partnership. Additionally, a 35 million-liter/annum biodiesel production facility is already in place in Zimbabwe.

The average wind speed in Zimbabwe is estimated to be 3.5 m/s. A non-governmental organization called ZERO conducted a number of feasibility studies and also financed the production of 1 and 4 kW wind turbines for off-grid use and for providing power to municipal buildings.
In the areas of Bulawayo and the Eastern Highlands, there is potential for power generation from wind turbines because these regions have the most prevalent wind speeds ranging from 4 to 6 m/s[2].

In 1985 the geothermal potential was acknowledged as being 50 MW. Currently not much else is known about the potential of geothermal. Due to Zimbabwes’s proximity to the Rift Valley region, it is reasonable to assume that geothermal power generation can be applied[2].

Zimbabwe has 30 billion tons of coal in 21 known deposits that could last for over 100 years[6].

Hwange Colliery Company (HCC) is the major coal company in Zimbabwe, with 38% owned by the government. HCC has large deposits of coal but does not have the financial resources to significantly boost output. HCC provided coal to the Hwange Thermal Power Plant, the largest thermal facility in Zimbabwe that has a capacity of about 750 MW, but is currently only producing 220 MW of power.

In September 2013, a Chinese backed company, China Africa Sunlight Energy, announced plans to develop a 600 MW coal-fired electricity plant in western Zimbabwe, beginning in 2014. The project is part of US$ 2 billion energy projects in Zimbabwe[7].

Zimbabwe does not have any indigenous sources of oil and natural gas and thus depends on imports for liquid fuel[8]. The majority of Zimbabwe’s refined petroleum and diesel oil are imported via a pipeline from the port of Beira in Mozambique to Mutare. Petroleum and diesel are also imported from South Africa[9].

Oil product imports in 2009 were estimated at 13,140 bbl./day, with consumption being approximately equal. Fuel import spending in 2009 stood at US$ 454 million, or 15.7% of total import expenditure.

A project is underway to produce 20% of the country’s liquid fuel as ethanol from sugar cane in Chipinge, Manicaland[10].

Capacity is a major concern in Zimbabwe. No new developments have occurred in the country’s generation sector since the commissioning of the Hwange Coal Plant in 1988. Thus only about 60% of the country’s installed capacity is available.

Furthermore, all coal-fired stations in Zimbabwe are in need of major upgrades as currently they have frequent production stops or are not producing at all. This has lead to frequent and long lasting blackouts in the country. Imports of energy from neighboring countries are not enough to solve the under capacity problem. As a result, power outages continue to affect the economic performance of industries and services. Small-scale power generators are used all over the country to ease this situation[5].

The Zimbabwean government has plans to boost the electrification rate to 85% by 2020. To achieve this target, ZESA announced the following plans[2]:

These plans are being held back by the lack of resources ZESA has. In September 2011, an energy and power conference was held in Harare with the aim of boosting international awareness of the energy problems in Zimbabwe and thus attract potential funding sources.

The Ministry of Energy and Power Development is still developing a Renewable Energy Policy. This is being addressed through a number of initiatives.

The Electricity Regulatory Bill, currently awaiting Presidential signature, specifically provides for “the identification and promotion of the employment and development of sources of renewable energy”[2].

In April 2018, the Rural Electrification Fund (REF) in Zimbabwe announced that they will electrify all public institutions such as schools, government extension offices, and other Government departments for free. REF offers 100% capital subsidy to the public institutions. The institutions only have to pay for the internal wiring of their buildings and the connection fees. For schools (only for administration block, science laboratories and computer laboratories), REF will also subsidize the internal wiring and the connection fees. [13]

In July 2019, Zimbabwe removed import duties on all solar-related products ranging from batteries to cables. The government also introduced a new mandate that all newly constructed infrastructure should have solar systems installed. This new move is aligned with the government's plan to promote local production as well as importing of solar equipment. The Zimbabwean government aims to produce 1575 MW of power from solar by 2030 (this is the same amount that Zimbabwe is producing currently). The government has also rolled out innovation mechanisms such as net metering and feed-in tariff for clean energy to enable Independent Power Producers to add their excess electricity to the national grid. [14]

Institutional Set-up in the Energy Sector

The Ministry of Energy and Power Development (www.energy.gov.zw) has overall responsibility for energy issues in Zimbabwe. The terms of reference include policy formulation, performance monitoring and regulation of the energy sector as well as research, development and promotion of new and renewable sources of energy. The Ministry supervises and oversees the performance of the energy parastatals, ZESA Holdings and NOCZIM.
The Rural Electrification Fund Act (13:20) created a Rural Electrification Agency (REA,www.rea.co.zw) that has the mandate for the total electrification of all rural areas, funded by electrification levies and government stipends. The main functions of the agency are the planning of projects, the raising and accounting of rural electrification funds, and the monitoring of project implementation.[2]

The Scientific and Industrial Research and Development Centre (SIRDC) carries out research and development in renewable energy and energy conservation. The Forestry Commission is active in the area of woody biomass as their mandate covers all state forests, which are a major source of fuel wood. The University of Zimbabwe’s Department of Mechanical Engineering and the Chinhoyi University of Technology run programs in renewable energy. The Harare Polytechnic has done some trials on Jatropha Curcas and biodiesel[2].

Local and Rural District Councils under the Ministry of Local Government provide area-based planning at the levels of districts and provinces[2].

The Zimbabwe Electricity Regulatory Commission (ZERC, www.zerc.co.zw) is a statutory body established under the Electricity Act, (Chapter 13:19) No. 4 of 2002, as amended by the Electricity Amendment Act No. 3 of 2003. It became operational in August 2003.
The Petroleum Act, passed in 2006, provided for the establishment of the Petroleum Regulatory Authority (PRA), to licence and regulate the petroleum industry, to promote the development of efficient procurement, sales and distribution of petroleum products, and to safeguard the interests of consumers of petroleum products. The PRA also has an advisory role to the Minister. The PRA is still to be established[2].

The sector is primarily controlled by the state-owned company, Zimbabwe Electricity Supply Authority Holdings (ZESA Holdings, www.zesa.co.zw), which, through its subsidiaries Zimbabwe Power Company (ZPC), and the Zimbabwe Electricity Transmission and Distribution Company (ZETDC), generate, import and distribute all electrical energy in the country[2].