From energypedia
(Redirected from Monocristalline)

A solar cell or photovoltaic (PV) cell is a semiconductor device that converts light directly into electricity by the photovoltaic effect. The most common material in solar cell production is purified silicon that can be applied in different ways.

Monocrystalline silicon PV cells are made from silicon wafers that are cut from cylindrical single-crystal silicon ingots. The rotund cells have to be cut to form nearly quadratic cells, that can be easily integrated in one module. Thus, refined silicon is wasted in the cell production process. The cut-off material generated during the squaring process will be usally recycled in the multi-crystalline wafer manufacturing or as incoming material for the polysilsicon producting due to higher cleaning cost for direct feed-in in the CZ-mono crystallization prozess.


Monocrystalline silicon shows predictable and uniform behaviour, but, due to the careful and slow manufacturing processes required, it is also the most expensive type of silicon.

The slow process time and higher energy consumtion in the CZ-crystallization process is compensated by the advantage of ctting thinner wafer in the Diamond Wire Cutting process. As multi-crystalline wafer material will generate higher cell breakage below 180 micron in the cell process, the mono-crystalline wafer can be as thinn as 120-160 micron.

Modules consisting of monocrystalline silicon PV cells reach commercial efficiencies between 15 and 18 %. So far, they are the most efficient modules and, with about 85% in 2010, have the largest market share. However, other alternatives are challenging this technology. 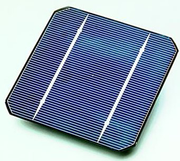 A solar cell made from a monocrystalline silicon wafer

-> PVCDROM.org, an educational website on photovoltaics, shows the production process of polycrystalline silicon PV cells with pictures and video sequences.

The various thin film technologies currently being developed reduce the amount (or mass) of light absorbing material required in creating a solar cell. This can lead to reduced processing costs from that of bulk materials (in the case of silicon thin films) but also tends to reduce energy conversion efficiency (an average 6 to 12 % module efficiency).[1]

Currently there are solar cells based in different new technologies in the way to market maturity, for example the high efficiency cells:

instead of semi-conductor material hybrid dye-sensitised solar cells use an organic dye for light absorption. Simple silk-screen allows cost-efficient production costs and offers different scopes for design as implementation in frontages or in advertising purposes [5]. hybrid dye-sensitised solar cells are able to use diffuse sun light. Average efficiencies vary from 2 to 4%.

Organic solar cells are still at an early stage of development. These cells consist of organic hydrocarbon compounds as well as a special electron structure and are able to generate electricity on foils and textiles. At present average cell efficiencies vary between 3 and 5 percent [5]. Minor material consumption and more efficient production technologies lead to a high potential for cost-efficient production. However, there is still need for research activities as life spans are very short.

In order to use the connected cells in practical applications they must be:

Therefore, the interconnected cells and their electrical connections are sandwiched between a top layer of glass or clear plastic and a lower level of plastic or plastic and metal. An outer frame is attached to increase mechanical strength, and to provide a way to mount the unit. This package is called a "module" or "panel". Typically, a module is the basic building block of photovoltaic systems.[6]

The peak power output of a solar module depends on the number of cells connected and their size. Module performance is generally rated under Standard Test Conditions (STC) : irradiance of 1,000 W/m², solar spectrum of AM 1.5 and module temperature at 25°C. Solar modules are rated in peak watts [Wp] according to their output under STC. Thus, a 50 Wp module can be expected to supply 50 W of power under optimal conditions. The performance is reduced by high temperatures.[6]

Like solar cells modules can be connected in series and/or in parallel to increase the voltage and/or the current depending on the system requirements.[6]

To compare the price of the different modules, the next database present monthly updated values: solarserver.de

Due to their high efficiency, market penetration and standardisation mono- and polycrystalline silicon modules are the most common modules used in solar home systems (SHS). However, the market share of thin film modules is growing, especially in free-standing and building integrated PV systems.

Retrieved from "https://energypedia.info/index.php?title=Solar_Cells_and_Modules&oldid=284725#Monocrystalline_Silicon_PV_Cells"
Categories:
Cookies help us deliver our services. By using our services, you agree to our use of cookies.