The Dutch-German Energy Partnership Energising Development (EnDev), started supporting the CREP in 2006. Due to its long involvement in the area of rural electrification, the Small Hydropower Promotion Project (SHPP) was mandated with the implementation of the EnDev project in Nepal.

The project supported CREP with the following two components:

In order to support poor communities in receiving electricity via the CREP, EnDev has financially supported (with 450.000 Euro) and facilitated CRED/NEA in setting up a community rural electrification fund. This fund helps communities that have difficulties in coming up with the 20% share of the investment. In order to receive financial support from this fund, CREEs have to deposit at least 5% of the investment cost and have to fulfill requirements set by CRED/NEA. The maximum loan from the fund is 15% of the estimated project costs. In future, the fund is planned to act as a revolving fund within the CREP. The repayment period starts after 2 years. The CRED/NEA is charging an annual 3% service charge.
During the period of the mission (September 2010) repayment had not yet started, even though the first projects had been receiving funding since 2006.

Furthermore the nature and utilisation of the 3% service charge is unclear. The representative of NACEUN mentioned that finances were set to be used for NACEUN’s (National Association for Community Electricity Users Nepal) general activities, which include the support of CREE in the case of construction delays or other conflicting issues. The representative of NACEUN also pointed out that the initial idea was for NACEUN to be the central management agency for the fund. Due to funding constraints it was decided to mandate CRED/NEA with the fund management in cooperation with NACEUN.


Of the initial 450.000 Euro within the fund, CRED/NEA has allocated financial assistance to 49 communities electrifying approximately 50,000 households. From these 49 projects, 14 are completed supplying electricity to connected households. The remaining 35 projects are in various stages from initial survey status to a few households within the CREE left to be connected. 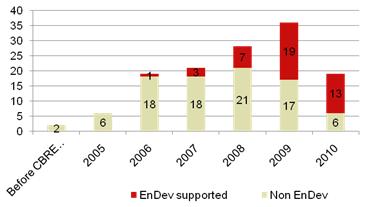 Only the recent year, 2010, draws up a different picture. This however could be attributed to the fact that the figures only show the numbers up to June 2010.

As a second component EnDev via SHPP supported capacity building for CREEs by offering training to participating communities. As mentioned earlier, training are viewed as most crucial for its sustainable operation of the rural utilities. During the mission in September it remained unclear which of the main partners involved had the obligation and mandate to organize and conduct training. On the one hand the by-law states that CRED/NEA is obliged to give training to CREE upon request within one year after closing the contract. In case no request is made within the first year of the contracting period, CRED/NEA may charge for training services.

CRED/NEA when asked about trainings, pointed out that they have conducted financial and administrative training as well as basic technical trainings for the CREE. NACEUN on the other hand sees the mandate for training clearly within their responsibility and indicates that the training mentioned by CRED/NEA are in reality conducted by NACEUN. NACEUN however mentions that the communities are charged for the services. Project staff from SHPP state that conducting trainings is not the core business of neither NEA nor NACEUN which results in either no training being offered or training of poor quality being offered.

For a detailed description of the conducted training see table below:

These training were mainly conducted in Kathmandu with participants from the respective villages. Unfortunately due to the set-up of the programme and the EnDev project, even villages where the grid-extension did not arrive until 2 years after participated in the training. These participants could therefore not apply the new knowledge directly after the training and as a result SHPP also offered refreshment trainings. With a new development within EnDev in 2009, the training were reduced to the two central modules administration and finance as well as technical basics. SHPP has tried to incorporate the different existing training modules into those two.


As outlined before it seems that no clear mandate for training of CREEs is given. SHPP had offered a good and wide range of training for the communities. Due to the lack of clear mandates for offering training SHPP’s interaction could have been better coordinated with the other stakeholder involved.


Unfortunately, no proper impact monitoring was conducted for the applied training. It would have been interesting to compare communities which received training to untrained communities to see whether the training offered make a difference in handling community utility. SHPP has tried to foster women’s attendance during the training and has achieved an average participation ratio of 20% women.

In June 2010 GTZ initiated a household connection verification survey visiting four CREEs to conduct micro-level household observations. A detailed load survey revealed some interesting data on productive end-use application. CREEs which have been established for some time gear towards productive use such as mills, water pumps for irrigation, saw mills, poultry farms etc. Besides agro-processing, sometimes also video parlours and cyber cafes are established in the villages. The newly established CREEs are prioritizing lighting and entertainment. The ‘old’ CREEs are even on the verge of being overloaded, and major overhaul of the system is necessary to keep up with the demand. Some CREEs are even suffering from internal load shedding, according to results from the survey.

The content of the different trainings, outlines of the modules are listed on a separate Wiki-page.

For a detailed overview on training modules for CREEs click here.