Analysis of the Regulatory Framework for Renewable Energy in Tunisia 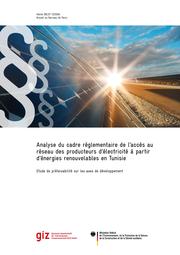 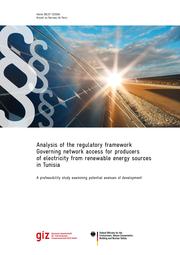 The aim of this study, which has been conducted on behalf of Deutsche Gesellschaft für internationale Zusammenarbeit (GIZ) GmbH, is to provide a legal pre-feasibility analysis of the development of legal instruments for use by foreign private operators in the renewable energy and, more particularly, the solar energy sector in Tunisia.
Our brief was to examine opportunities for promoting the production of electricity from renewable energy sources within a managed legal and financial context, taking as the main avenue of development a number of legal structures and models, such as leasing and energy service companies (ESCO), which already exist in Tunisia.
More generally, the study shares the approach already adopted in the Mediterranean Solar Plan (MSP), which aims to promote the use of energy efficiency technologies and renewable energy sources in the countries of the Southern and Eastern Mediterranean (SEMED), to improve the energy situation in the region and to prepare for and promote the export of electricity produced from renewable energy sources. These aims are shared by the Tunisian Solar Plan (TSP), which was created to coordinate the launch of concrete energy consumption rationalisation programmes in Tunisia.

Tunisia is currently undergoing a period of political, economic and energy transition which is crucial for its future. The challenges are great. The National Conference on Energy Transition held in 2013 highlighted the importance of the energy efficiency promotion measures supported by the ANME as “having generated tangible energy savings” . They also underlined the urgent need to accelerate the transition process and to limit and contain Tunisia’s energy deficit.
However, this acceleration is dependent on funds, which are difficult to mobilise.
Difficult firstly because Tunisia needs significant finance to set up a new regulatory and institutional framework and because it is, like many countries, a victim of the current economic crisis, which is limiting access to credit.
Difficult, too, because against this backdrop the financial system and banks in particular are seeking to reduce their leverage and long-term assets, particularly in light of the targets set by the Basel III Agreement adopted in 2010, which came into force in 2013 .
This situation has a direct impact on the financing of renewable energy development projects, 70 to 80% of which involve medium- or long-term borrowing (on average 15 to 20 years).
It also means that any assessment of possible avenues of developing the foreign private investment in the renewable energies sector must necessarily involve a systematic search for the least expensive option.
These avenues of strategic development can be divided into two main categories, which are nevertheless closely interlinked. Firstly, those dependent on the institutional and regulatory framework in Tunisia and, secondly, those which are more or less directly dependent on a system of financial aid.
In considering avenues of development dependent on Tunisia’s institutional and regulatory framework, it is important to consider two principles:
As regards avenues of development requiring financial aid, and subject to the reservations set out above in relation to the draft law on the “production of electricity from renewable energies”, this study has shown the benefits of a constant effort to promote the following schemes:
In more general terms, the financing of this type of project through specialist banks at very low rates as shown by the experience of the Kreditanstalt für Wiederaufbau in Germany, which gives 1% loans for renewable energy development projects and public/private risk sharing (or the Green Investment Bank in the United Kingdom);

Retrieved from "https://energypedia.info/index.php?title=Analysis_of_the_Regulatory_Framework_for_Renewable_Energy_in_Tunisia&oldid=79913"
Cookies help us deliver our services. By using our services, you agree to our use of cookies.