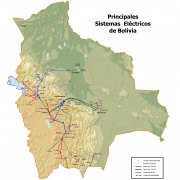 Bolivia is one of the poorest countries in Latin America and has one of its highest levels of inequality. The reduction in poverty rates experienced in the 1990s when Bolivia had modest but consistent growth rates was reversed by external and internal shocks at the end of the millennium. The per capita Gross National Income (GNI) amounted to US$1,260 in 2007, and the United Nations Development Program (UNDP) ranked Bolivia 117th (out of 177 countries) on its Human Development Index.
An Interim Strategy Note was signed by the Bolivian Government and the Worldbank in 2009. The mayor focus is on equity. With respect to the energy sector the paper focusses on the development and exploitation of the hydrocarbon resources. the Decentralized Infrastructure for Rural Transformation (US$20 million), which provides alternative energy mechanisms (solar panels) to remote areas, and might help reduce, although not significantly, pressures on energy demand. Depending on performance and Government priorities, a second phase of the programme will be considered.