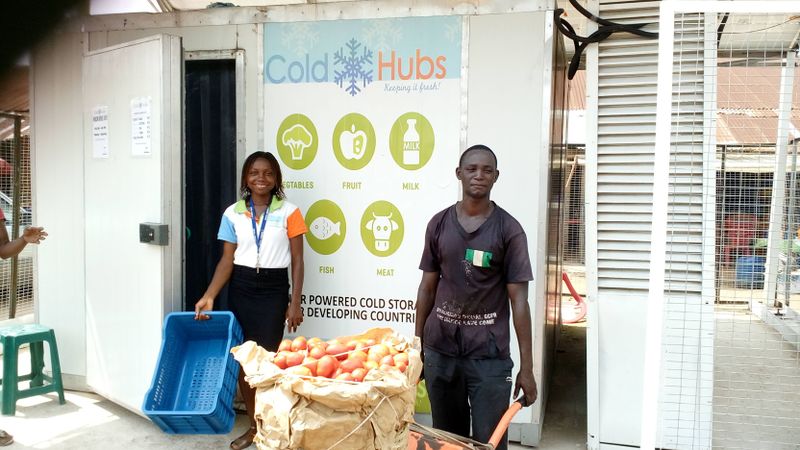 5 solar cold hubs have been installed in Nigeria, three on markets in Owerri, Orlu and Obowo (all in Imo state), and two on cooperative level in the Kano region. The technology has been developed by the ILK Dresden and installed by the Smallholders Foundation. The Nigerian company ColdHubs supplies markets and cooperatives with the cold rooms. The pilot project has been implemented under the initiative “Powering Agriculture-An Energy Grand Challenge for Development” (PAEGC).


This summary represents the findings of an analysis of the financial viability of the solar cold room. It is crucial to access whether the implementation of Cold Hubs is financially profitable without external funding in order to ensure its upscaling potential. If so, it would be an important and sustainable innovation to minimize food waste, increase farmer incomes and reduce environmental impacts: being a sustainable solution for the future to come.


Each Cold Hub has the capacity to store approximately 2 tons of perishable food (150 crates). The two Cold Hubs analysed exceeded the maximum storage capacity by 161 crates on average. This maximum capacity was in general filled by 3 to 4 customers. Most of the users used the rooms intermittently: The majority used the cold room once a month and less than 10 percent (4 out of 44) were storing products more than five times per month.

[edit] Alternative Business Models: Profitable but Investors Are Reluctant Due to Higher Risks

In order for this model to be more attractive for bank investors, the sensitivity analysis offers a range of solutions includingraising the cooling fee price, gaining specific interest rates on loan/leasing fees and increasing the down payment of the initial investment (equity financing). These measures would make the business model more profitable.

The ownership model is still the solely one used. In 2019, 19 ColdHubs have been installed which indicates a rapid growth. The ColdHubs are currently operating in the states of Imo, Akwa Ibom and Karu Nasarawa (Table 5) serving an estimate of 2000 farmers, wholesalers, and retailers. Five of these Hubs saved 11,400 tons of food from spoilage in 2018. What is more, it increased the household income of 612 users from US$60 to US$120 per month by reducing previous losses with 50% .


Currently 21 additional Cold Hubs are being deployed which will bring the total number of Hubs to 40, serving 2,100 new farmers, retailers and wholesalers.

[edit] Learn More About This Project