The Democratic Republic of Congo (DRC) is in the center of sub-Saharan Africa. DRC is bordering the Central African Republic to the north, the Republic of Congo to the north-west & South Sudan to the north-east. On the eastern borders lie Uganda, Rwanda, Burundi & Tanzania (with Lake Tanganyika separating the borders). The South Atlantic Ocean is to the west of the country, with Angola to the south-west & Zambia to both the south and the south-east. 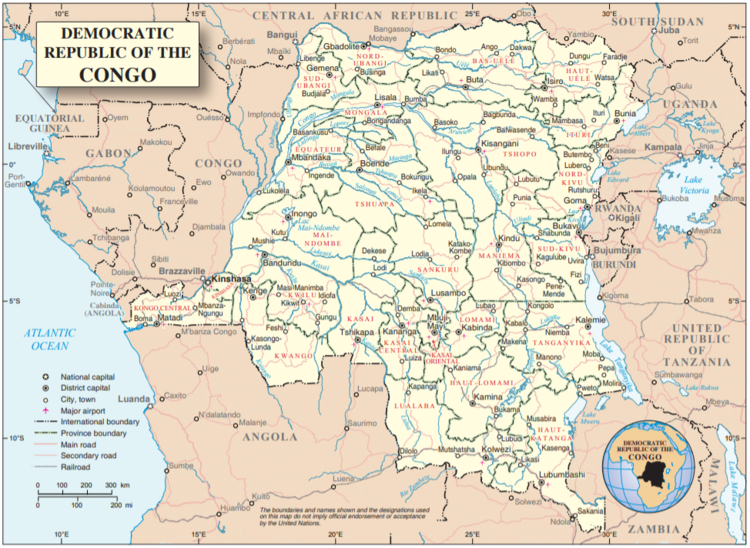 The DRC's potential to generate energy is high, having a wide range of both renewable and non-renewable energy sources[1]. The DRC's potential renewable sources are hydropower, biomass, solar, wind and geothermal, while the non-renewables would be oil, natural gas & uranium[1]. Approximatrely 9% of the country's generated domestic power comes from hydropower, specially the two Inga dams (Inga I & Inga II)[1][2]. 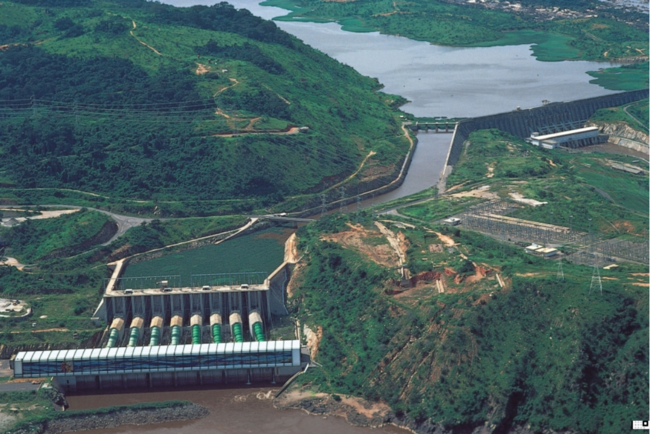 While the country has abundancy for hydro-based power generation, the country's production of different fossil fuels such as coal and natural gas is modest and very limited[2]. The DRC's total hydropower capacity is about 100,000 MW, with the Inga damn solely counting for 40,000-45,000 MW[3].

A decade ago, during the year 2009, 89% of DRC's total population did not have access to electricity, leaving only 11% with access, while 94% of the population were completely dependent on biomass as the main cooking fuel[3][4]. 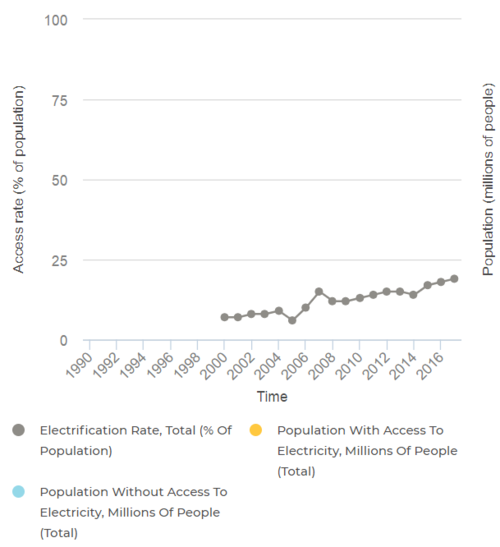 Though the access rates have gone up by the year 2017, as the population with access went up from 11% in 2009 to 19%, yet the access rates in the country still alarming, especially in the rural areas where about only 4% have access to electricity, and no proper efforts have been made or taken to increase the access rate or improve the situation. 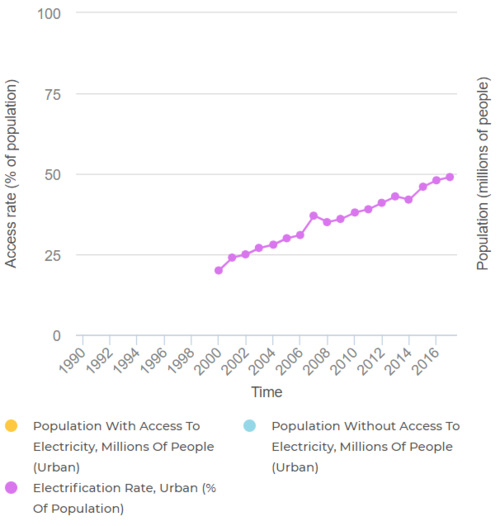 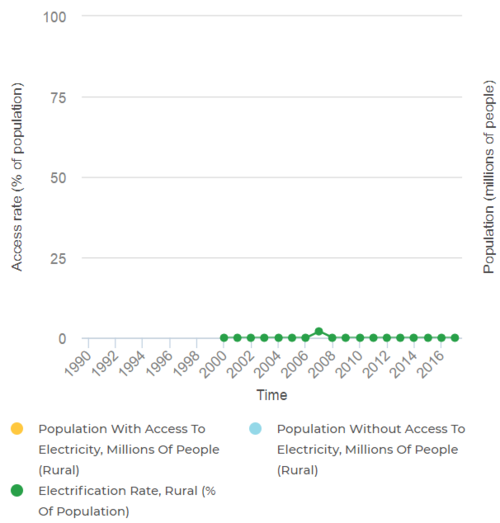 Hydropower comes as the number one and major energy supplier in the country, with biomass (wood & agricultural residues) and oil as the secondary ones[3]. 99% of the DRC's produced electricity comes from hydropower, while both oil and gas account for the remaining 1%[3]. 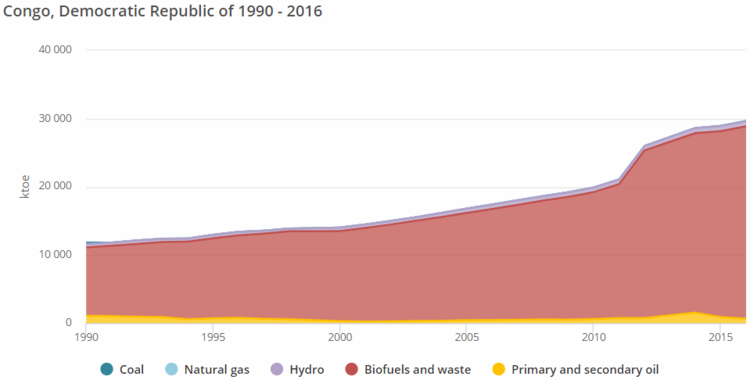 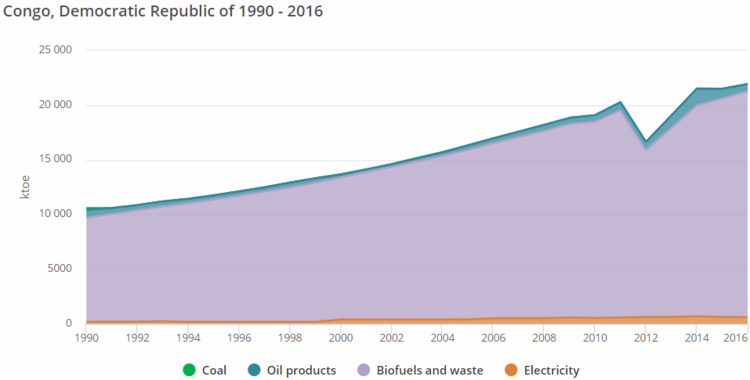 77% of the country's total final energy consumption goes only for the residential sector, making it the major consuming sector[6]. The industrial sector counts for 20.5% of the final total energy consumption, and 2.4% for agriculture, transport & public services all together[6]. 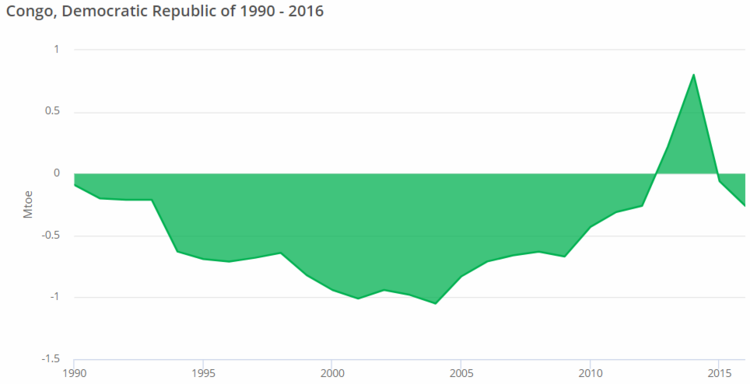 As mentioned earlier, the country possesses a significant potential for renewable power generation, which is illustrated further as follows[6]: 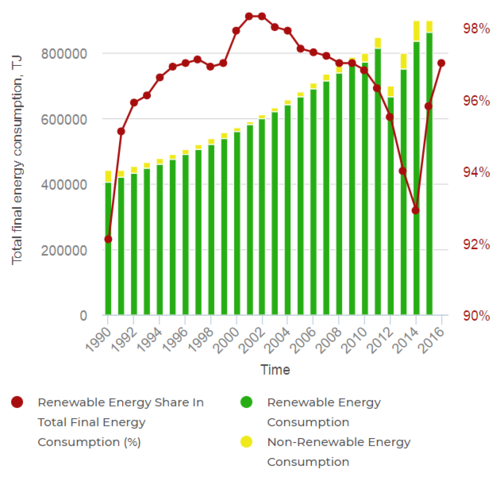 The previous figure shows the rate which represents the ratio of the renewable energy consumption of the country's total final consumption from the 1990s until 2015. As shown, during that period, the renewables consumption has never been less than 92%, which comes mainly from hydropower. 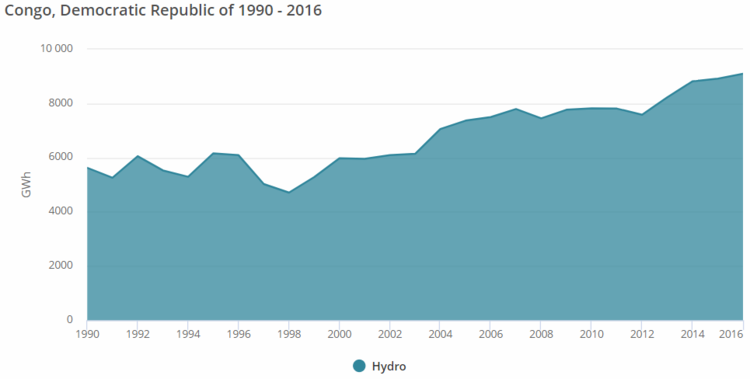 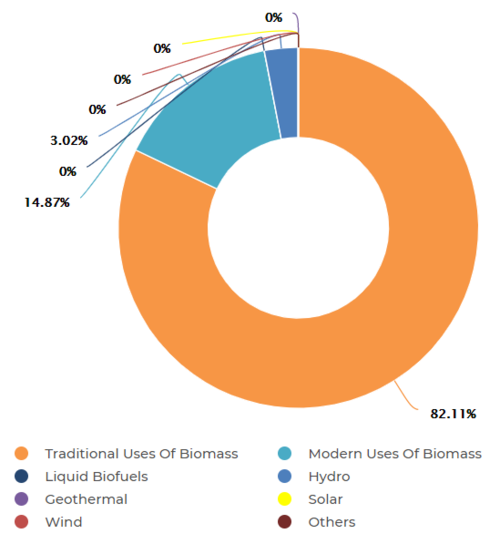 Though hydropower resources in the country are considered to be the highest in the African continent, counting up to 774 GWh of potential generating capacity, yet the current exploitation rate of these resources does not exceed 3% of that total potential[9].

Therefore, few projects have been initiated recently by the government, so that the hydropower generation can be improved, such as[6]: 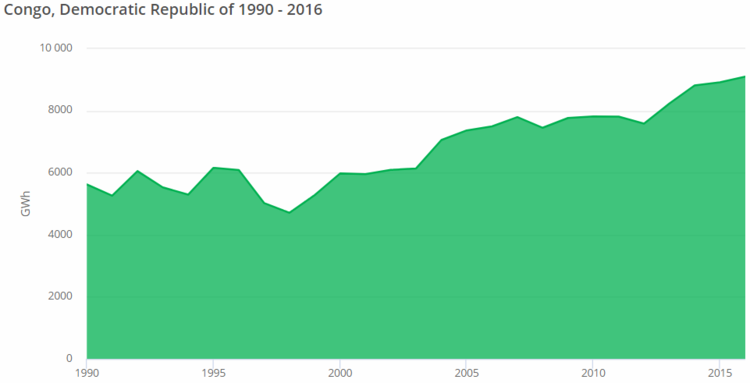 With an average solar radiation of 6 kWh/m2/day, the DRC has great potential for implementing photovoltaics (PV) and solar heating systems through the entire country[6]. Yet, that's not the case, as through the whole country there are only a total of 836 installed solar PV systems, accounting altogether for a total operating power of 83 kW[6].