Retaining heat is a good way to delink the time of food preparation and the time of food consumption. This is especially helpful to complement a fuel that is not available on demand like solar energy. It allows having hot food even after sunset, when sunlight is not available to cook.
Heat retainers cannot substitute a stove, but they can be used to complement any stove and any fuel. In order to retain heat for cooking, heat needs to be generated first. By combining the heat retaining devices with other energy-efficient technologies (pressure cookers, solar stoves, improved cook stoves) or practices, it can contribute to reducing the fuel consumption considerably.


Depending on the material used, heat retainers can be as well used for cooling.

Thermos flasks are an inexpensive way to maintain the heat of water, beverages or liquid foods like soup and porridge over time. In places, where food preparation is based on pouring hot water over food items such as in Tibet, thermos flasks save fuel and enhance cooking comfort. Alongside solar cookers, families own up to five thermos flasks and store the water heated by the solar cooker during the day. The hot water is used for preparing both morning and evening meals (mainly soup and porridge) enabling the solar cooker to satisfy almost all household energy needs. However, this represents a rather specific case, which may not be transferable to many other countries.[1] Yet, thermos flasks are currently underutilized and could probably play a more important role. When promoting the use of thermos flasks, features concerning price, durability, cleaning, size and material (toxic) have to be also considered.

In some parts of the world, the concept of the fireless cooker has been known about for centuries. It became popular in the western world in the years between the 1890s and the 1930s. Initially, the heat retention cooker was mainly used to make food more portable for use by people on the move such as fishermen, hunters and soldiers. However, during the first decades of the twentieth century, the fireless cooker also became a permanent fixture of many American and European households, an appliance often found next to the cooking stove. Nowadays, it is mainly promoted in developing countries.[2]

The fuel consumption during the cooking process is not constant. A lot of fuel is required to heat up the content of a cooking pot to boil. However, once it is boiling, it only takes little energy to keep it hot and maintain the temperature at boiling point.

Cooking with heat retention boxes or bags means that food is brought to a boil, simmered for a few minutes depending on the particle size and then put into the fireless cooker to continue cooking. Since the insulated cooker prevents most of the heat in the food from escaping into the environment, no additional energy is needed to complete the cooking process.[3] This is why this is called 'fireless cooking'. 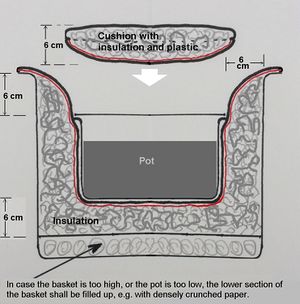 Construction and functionality of the heat retention box (fireless cooker, hay box, hot bag etc.) depend on the insulative properties of the material used. The underlying principle of insulation is that isolated air is a poor heat conductor. The more insulated pockets of air you can create between the cooking pot and the ambient, the more heat will be retained inside the pot. Insulative materials are available almost everywhere available. For example organic residues such as hay, sawdust, cotton waste, or dried leaves, e.g. from banana plants can be used. Other materials are waste paper, polystyrene beads, or vermiculite. An insulated lid or cushion closes the box or bag.[4]

Depending on the type of stove used for boiling, food cooked, and traditional cooking practices, using heat retention bags can reduce fuelwood consumption to a great extent. According to a test of The Partnership for Clean Indoor Air (PCIA) the energy savings of fireless cookers combined with different stove types amount to an average fuel reduction of 50%.[5] Some people report that they can save up to 80% of their fuel, depending on the food and the efficiency of the insulation.


Especially for food that does not require any stirring, e.g. (sweet) potatoes, meat, cassava or rice etc., fireless cookers are very suitable. Food can be kept warm for up to 6 hours, e.g. for people who return home late from the field or the market and want their children to find hot food when they come back home from school. 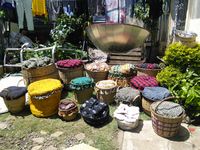 Heat retention boxes/bags have been successfully introduced for taking care of sick people in Malawi. Patients often cannot eat one big meal but have to eat or drink small portions of food or tea many times throughout the day and night. Without a fireless cooker, this would require frequent food preparation. In a retained heat cooker, food can be kept warm near the bed of a sick person who can take hot food or tea at a time of his convenience for a period of 3-4 hours. This has particular relevance for taking care of HIV/AIDS patients.[8]

As a project, if deciding between the introduction of a heat retention box or a bag, the following points could be helpful:

Manuals, reports and other articles:

Retrieved from "https://energypedia.info/index.php?title=Heat_Retainers_-_Thermos_Flasks_and_Fireless_Cookers&oldid=255140"
Categories:
Cookies help us deliver our services. By using our services, you agree to our use of cookies.