The Republic of Kazakhstan is located in Central Asia. The neighbouring countries are Russia in the North and West, China in the East, and Kyrgyztan, Uzbekistan and Turkmenistan in the South. The capital of Kazakhstan is Astana and the country is administratively divided into 14 regions.

Semi-desert and desert land covers 60% of the territory, forest and steppe land areas comprise 10%, and about 5% is categorized as highlands. Forest covers 1.2% of the land but this number is quickly falling as the country experiences decreasing forest coverage of approx. -0.17% annually[1]. The percentage of land to water is 98% to 2%.

The climate in Kazakhstan is continental with cold dry winters (below -50°C) and hot dry summers (more than 53°C). The precipitation ranges between 15 to 320 mm annually. The average minimum temperature is 3.8°C and the average maximum temperature is about 14.6°C with regional differences in the north, south and west [2].

Kazakhstan has 220 million hectares of agricultural land, of which 10.8% is arable land, 2.2% is haying land, and 85% is pasturable land.

There is a discrepancy between rural and urban population income. While 32% of the rural population lives below the poverty line, the urban rate is 16%.

Kazakhstan is rich in reserves of fossil fuel. It owns about 0.5% of the world´s mineral energy resources, equaling 90 billion tons of oil equivalent. This number includes 70% coal, 22% oil, and 8% gas. 99% of its energy needs are covered by fossil sources. The fuel energy sector production contributes about 17% of the GDP.

Primary energy in Kazakhstan are fossil fuel resources with the following share in 2006: 19% oil, 49% coal, and 31% gas. The share of renewable energy, mainly hydro power, is about 1%. Data on the use of traditional fuel sources such as firewood for domestic use were not available.

Percentage of energy types used for cooking in urban areas and rural areas: 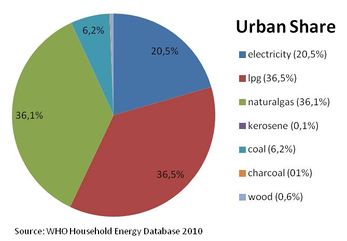 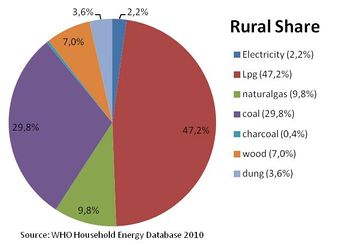 The energy demand for heating is assumed to be high due to the cold winters, but quantitative data are not available as of yet.

Impact of solid fuels on health

The present share of using renewable energies in Kazakhstan is very small due to the low prices for fossil energy. But the potential is estimated to be high:

Wind energy: Kazakhstan has enormous wind resources due to the location in the northern hemisphere´s wind belt, though only a small part of the wind potential is used; 500kv out of a potential 1.3 trillion kWh of electric energy per year at the Jungar Gates is used.

Solar energy: Kazakhstan has 2,200 - 3,000 sunshine hours anually, which equals 1,300 - 1,800 kW/m² annually. Despite the very favourable conditions for solar energy, there is little use of the resource. Some private households mainly in rural areas use solar-thermal energy, however a market for the equipment is not existent.

The majority of of the distribution network in Kazakhstan has not been privatized yet. Even the Kazakhstan Electricity Grid Operating Company (KEGOC) has granted several management rights to private companies. The policy is focused on energy saving and optimization of current electric plants with fossil energy sources. The main problem people are facing with regard to energy and electricity is the low capacity of the centralized power stations in the south of the country. High transmission losses (25 - 50%) and the deterioration of transmission lines cause electricity shortage in remote rural areas. Only a small fraction of around 3.5% of rural settlements do not have access to energy and electricity. About 1% of the population is not connected to the grid in rural areas.

Retrieved from "https://energypedia.info/index.php?title=Kazakhstan_Energy_Situation&oldid=264286"
Categories:
Hidden category:
Cookies help us deliver our services. By using our services, you agree to our use of cookies.