To maximize independence of fuel price fluctuation, a so called Battery Based Hybrid System uses batteries in order to store any excess energy, making it a good option for full- day operations. However, the batteries and their mandatory replacement over time make this system also very cost intensive. In this setup kWp will cost between 33,000 LE to 47,000 LE, with the batteries making up almost half of these costs. 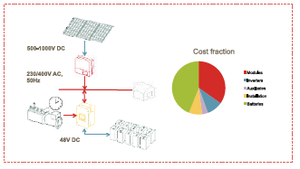 To avoid fluctuations in the irrigation schedule and to prolong irrigation hours one may prefer a hybrid system, which combines solar and diesel power. A so called solar fuel saver system avoids the aforementioned high battery costs; by using a controller that ensures continued operations. This system costs only around 16,000 LE per kWp and is therefore much cheaper than the battery based hybrid system. However, this system requires a constantly running diesel generator, despite solar energy being the main energy source. 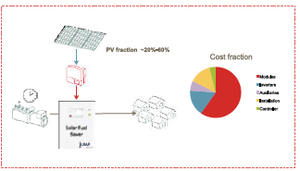 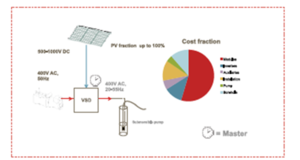 Retrieved from "https://energypedia.info/index.php?title=Solar_Powered_Irrigation_Systems_in_Egypt&oldid=322264"
Categories:
Cookies help us deliver our services. By using our services, you agree to our use of cookies.