From energypedia
(Redirected from Result-Based Crowdfunding)

The idea of reward-based crowdfunding is to raise money using online platforms where interested funders can make a financial contribution. In return, the funders might get a small monetary reward such as mentioning their names on the company website, company products such as T-shirts and the funded technology itself eg. solar lights. The funders are usually motivated by altruism[1][2]. Crowdfunding began as a wider phenomena in USA and Europe since 2008 in response to the economic crisis[3] and is now a popular funding mechanism.

Reward-based crowdfunding is mostly used by companies who are in their pre-seed to seed stage and where there are limited grant commercial and grant capital[2][1]. It is used to generate fund for a particular projects such as R&D,  developing new prototypes and manufacturing new products[5]. Off-grid solar companies that have done crowdfunding include: Okra Solar, Pollinate energy and solaris off-grid [1].


There are two models of reward-based crowdfunding:

Different platforms have different requirements such as restricting people from certain countries, restricting projects in certain country to restricting payment options. Thus, off-grid start up companies looking into reward-based crowdfunding should take into account all these factors. Below is an overview of the reward platforms and their restrictions[2]:

Also below is a list of the reward Platforms and their currency fluctuations[2]: 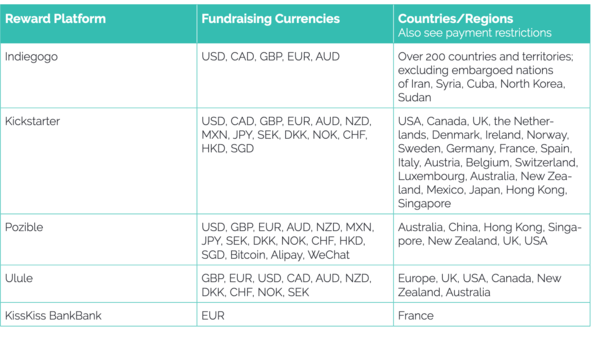 Reward platforms also charge a fee and this should also be a criteria for choosing the appropriate platform.

Retrieved from "https://energypedia.info/index.php?title=Reward-Based_Crowdfunding&oldid=318699"
Categories:
Cookies help us deliver our services. By using our services, you agree to our use of cookies.