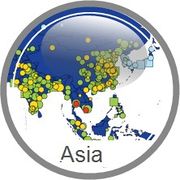 Under this thematic area, all work that has been published or reported in field of Transport Resilience is mentioned. The table below provides highlight of the published work.