This article has been adapted from the GIZ Sourcebook on Adapting Urban Transport to Climate Change[1].

Transport is linked to all aspects of urban life: leisure, education, business and industry. Ensuring a resilient urban transport system is therefore necessary to avoid large and costly disruptions of urban life. As current weather impacts on transport will become more frequent and more extreme in the future, the number of days on which the transport system is confronted with extreme stressors will increase. If no adaptive measures are taken, more frequent disruptions and higher economic costs must be expected.

Adaptation in transport cannot be viewed in isolation nor be reduced to technical infrastructure fixes.


In order to deal with climate change, transport systems must be:

Urbanisation rates average 2% globally, but are higher in many developing countries. Being home to more than three billion people, cities are major sources of greenhouse gas emissions.

At the same time, with high population and infrastructure densities as well as concentrated economic activities, cities are particularly vulnerable to the impacts of climate change and need to adapt.

It must also be noticed that not all people are equally vulnerable. Their vulnerability basically depends on two factors: the exposure to climate hazards and their ability to adapt to or avoid those impacts. In general, the urban population most vulnerable include children, ill and disabled people or the elderly, who are less able to cope with heat stress or to flee quickly in the case of a disaster. But also the urban poor – especially those most exposed, e.g. by living on floodplains or in poor quality housing –, who are not able to move or change jobs if their livelihood is threatened. These are also often the people least able to recover from a disaster, loss of home or income. Wealthy people on the other hand, are better positioned to take protective measures or escape when disaster occurs. For instance, a response to tropical storm warnings is to evacuate high-risk areas. However, due to limited access to (private) mobility this is not easily possible for the urban poor, when evacuation plans do not include sufficient (and free) provision of public transport to evacuate.

City governments can improve the resilience of their poor and vulnerable populations by catering to their specific needs. This includes the provision of an affordable, safe and inclusive urban transport system – especially in times of crisis. Poor neighbourhoods will have to be actively integrated into city, land-use and transport planning – not segregated – in order to increase the resilience of the urban majority and urban systems as a whole.

Road infrastructure, including infrastructure for non-motorized transport (bicycle lanes and walkways), provides the foundation for most public, private and commercial mobility in developing cities. The table below gives a detailed overview of the relevant climate impacts on road infrastructure and possible adaptation measures.


A few features of rail infrastructure are decisively different to road networks and deserve special attention when it comes to adaptation:

To ensure that rail is resilient to partial system failure, e.g. when one or several lines are flooded, the electricity network for rail should be designed in a way that allows operating different lines or groups of lines independently. Otherwise flooding or other damage to one line may result in complete system shutdown and related cascading disruptions of mobility and economic costs.

A summary of expected impacts on rail-based transport and related adaptation measures are presented in the table below.

[1] Rail stressing means that continuous welded rail is stressed (either through compression or through extension) into a state where fracturing (due to rail shrinking in cold) or buckling (due to rail extension in heat) of rails due to extreme temperatures can be avoided.

Urban waterways provide important transport infrastructure for freight transport, but also for public and private transport in some cities. The potential impacts and adaptation measures are summarised in table below. Where impacts are severe, certain waterways may have to be abandoned entirely or the construction of new waterways may become necessary.

Public transport encompasses different means of transport: busses, mini-buses, vans, metro and trams, taxis, as well as rickshaws or three wheelers. In most developing cities, much of the public transport is concentrated on (mini) busses, as well as multiple forms of paratransit, using road infrastructure.

Importantly, planning for public transport must also be closely integrated with planning for road infrastructure (adaptation) to design an efficient and resilient system.

Public transport and informal paratransit needs to be resilient, because

Vehicles will essentially have to be designed to withstand higher temperatures: On the one hand, rising temperatures will increase heat stress for passengers and drivers of busses and trains without cooling or air-condition, on the other hand the functionality of engines and the equipment of railway vehicles may suffer from extreme temperatures.

Furthermore, the impact of high temperatures on public transport without cooling could further reduce the quality and attractiveness of public transport systems and hence, in the long run, might support a modal shift towards air-conditioned private cars for those who can afford them. In this case, adaptation to increasing temperature goes hand in hand with building sustainable transport systems suitable for developing cities and providing an alternative to further motorization

The table below gives an overview of relevant climate impacts on public transport vehicles and operations.

Increasing events of adverse weather conditions like heavy rains, strong winds and extreme temperatures may lead to less walking and cycling trips, at least beyond a certain trip length. For short trips on the other hand, the impacts of extreme weather can be expected to be rather low. This underlines the importance of sustainable and dense urban design for resilient mobility. Dense urban design, at the same time, benefits the development of sustainable transport, reducing travel demand and related transport emissions, in turn reducing the climate impact and improving air quality.

Changes in temperature are already forcing cities to provide infrastructure for shading. The following image from Hangzhou (China) is typical of the shaded cycle way shadings that have been installed at intersections in China. 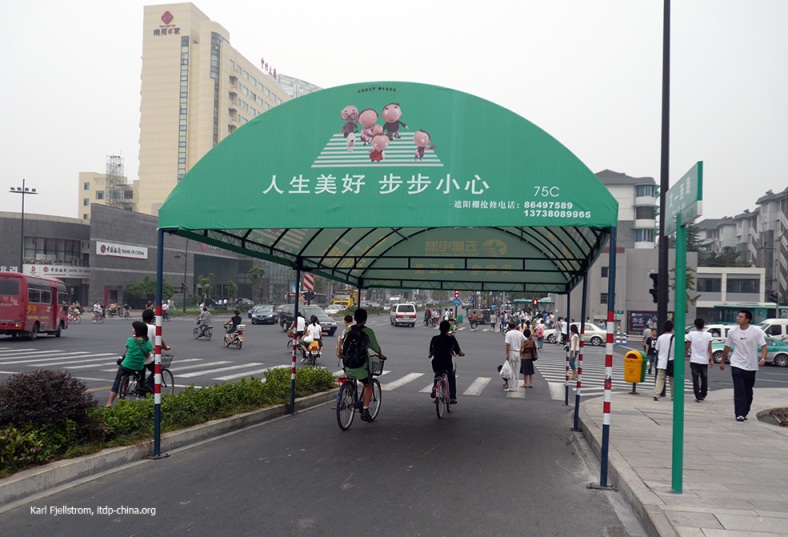 Similarly to non-motorized transport, behavioural responses can be expected during adverse weather conditions. Empirical studies point to slower traffic speeds during rainfall events, leading to delays and disruptions. Accidents also become more likely under adverse weather conditions, although accident severity appears to decrease during precipitation, likely due to lower traffic speed. Consequently, precipitation leads to an increase in travel time with the most severe impacts on already congested routes and during peak hours. This is particularly relevant for many large cities already suffering from traffic congestion.

As for non-motorized transport, land-use planning favouring short-distances can reduce travel demand and hence the exposure to adverse climate conditions.

First of all, information and awareness raising about the need to start adaptation today are important components to improve the capacity and the acceptance of both decision-makers and society to adapt. As adaptation of urban passenger transport cannot be limited to simple technical fixes, but also requires behavioural changes of transport users and a shift in thinking in planning approaches, adaptation must be understood as a social learning process. Convincing municipal government officials across departments of the local relevance of adaptation is a prerequisite for a successful adaptation strategy. In many cases this will require training key personnel and identifying so-called “adaptation champions” who will push the adaptation agenda within their departments.

Three basic approaches to adaptation can be identified:

These three approaches have been developed in the context of adaptation to sea level, but in general they are applicable to all climate risks.

Whereas retreating from areas at high risk of a climate hazard (be it sea-level rise, flooding, landslides or any other risk) may be a measure of last resort, in a planning context retreat translates into avoiding developments in high-risk areas in the first place and may be the cheapest option.

Protection can include both hard (e.g. sea walls) and soft measures (e.g. protection of mangroves to buffer storm surges). Protective measures are also not limited to sea level rise, or riverine flooding, but include any other means that help protect transport infrastructure or even mobility in the wider sense, such as green spaces or trees that provide shading, wind fences or additional drainage.

Whereas protection can be seen as “external” measures, accommodation means adapting the transport system or infrastructure itself. Accommodation also includes both hard (mostly infrastructure and vehicles) and soft measures (concerning the transport systems as a whole). Hard measures could be changing design standards and construction materials to withstand higher levels of flooding or temperature or including air conditioning in vehicles, whereas soft measures could encompass planning for emergency bus routes or even strengthening public transport networks to increase overall system resilience.

The Framework for Effective Adaptation

Monitoring and gathering data on intense weather events and their consequences for the transport system (both now and in the past) can improve our understanding of the implications of climate change for transport, including their direct and indirect costs. This knowledge can then strengthen the basis for taking decisions on adaptation. Data should be systematically assessed, entered into a database and ideally be exchanged between cities to enhance mutual learning.

For adapting transport infrastructure an overarching strategy is needed, which basically consists of four elements:

Adaptation of urban transport in developing cities must hence be seen in the larger context of addressing transport needs as a whole, if vulnerabilities of the urban system are to be minimised. Further work is needed on clearly defining realistic steps towards achieving a climate-proof, pro-poor and affordable urban transportation system in developing cities. For instance, more specific design standards that are suitable for developing countries are needed.

Retrieved from "https://energypedia.info/index.php?title=Adapting_Urban_Transport_to_Climate_Change&oldid=117473"
Categories:
Cookies help us deliver our services. By using our services, you agree to our use of cookies.