In many countries, milk is exclusively produced by small and medium sized dairy farms with daily milk output below 200l. Their milk is in most of the cases transported to milk collection facilities, without any form of cooling. In addition, lack of hygiene and cleaning procedures and problems with cattle health are the most common reasons of high bacterial growth during short-term storage of milk on the farm and during transportation.

Under warm climatic conditions, milk can exceed the maximum bacterial count prescribed by food safety laws after about two to five hours. During the hottest periods of the year, lack of quality can lead to high rates of refused milk at collection centers or dairy plants. Furthermore, due to low production volumes, evening milk is often not collected year round, thus causing additional on-farm losses. Small-scale solar powered milk cooling technologies can support the milk value chain at farm, cooperative and collecting center level by increasing productivity and giving access to price premiums and to additional markets. 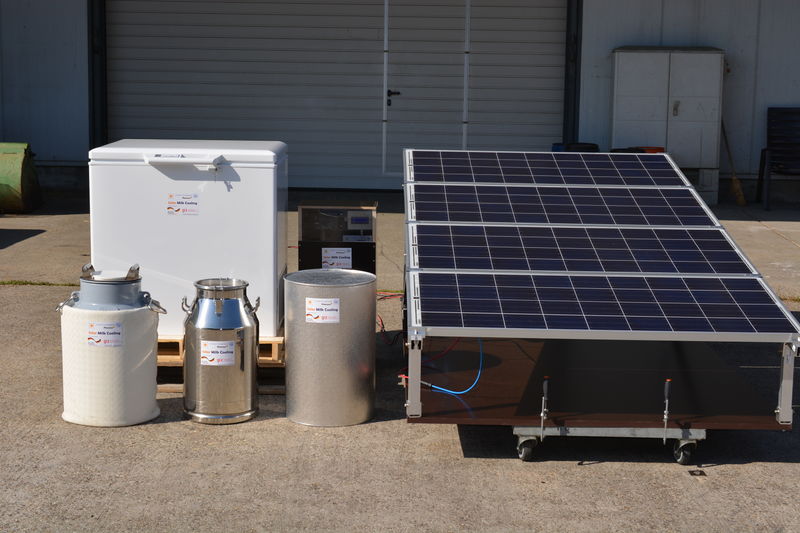 The milk cooling solution developed by the University of Hohenheim is based on a commercially available DC refrigerator, equipped with an adaptive control unit for its conversion to a smart ice-maker. It operates depending on the availability of solar energy. Do it yourself - solutions for solar ice making are also possible.

Cylindric tins are used for the production of ice, which is then put into the ice-compartment of the Insulated Milk Can. Depending on the amount of milk and ice, different cooling temperatures and storage times are reached.

One system includes 24 reusable plastic blocks of 2 kg capacity and two 30l insulated milk cans with removable ice compartment. The smart ice-maker is powered by 600 Wp solar PV modules together with two batteries with a total capacity of around 1.5 kWh. Thanks to the thermal energy storage, in form of the 24 2 kg-Ice-blocks, the system is able to run autonomously for up to 5 days even during periods of low solar radiation and high ambient temperatures.[1]

Performance of the refrigerator with adaptive control unit

The implemented adaptive control unit allows the efficient use of conventional DC-Refrigerators for an intensive and reliable production of ice all over the year. The ice-maker is equipped with following features: 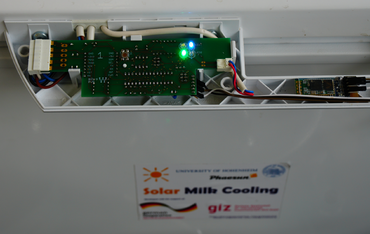 Adaptive control unit installed in the handle of the refrierator 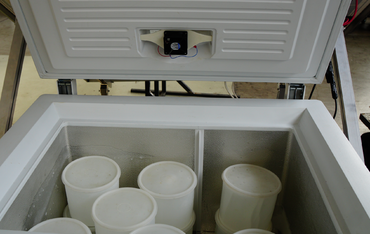 Fan in the refrigerator for uniform temperature distribution

The milk-cans implemented are made of stainless-steel and have a capacity of 30 liter milk and 8 kg Ice. This allows a flexible use of them depending on the cooling requirements. The milk-can has been design to operate for two modes as described in following table.

The cooling performance and bacterial growth were measured with real milk under lab conditions in a climate chamber. On-field milk quality assessments are currently carried out in order to confirm the potential of the system to retard bacterial growth depending on milk temperature and transport time under real working conditions.[1] 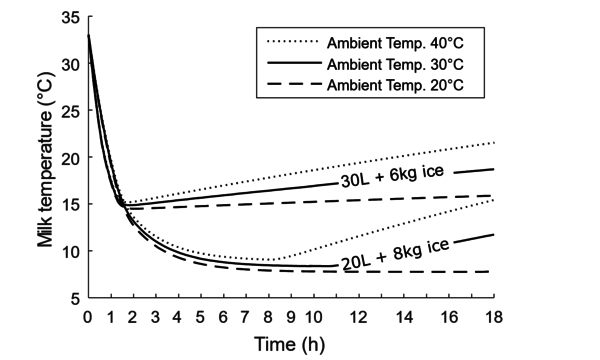 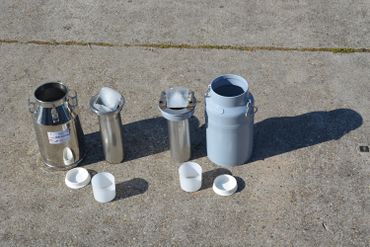 Metal and plastic version of milk can with ice compartments 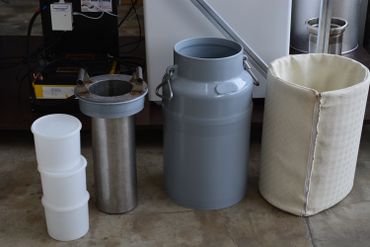 In order to evaluate the potential of solar milk cooling systems under real conditions, on-field projects have been implemented in the following countries:

Retrieved from "https://energypedia.info/index.php?title=Solar_Milk_Cooling_with_Insulated_Milk_Cans&oldid=279035"
Categories:
Cookies help us deliver our services. By using our services, you agree to our use of cookies.