Tunisia is a small country located in Northern Africa sharing borders with Algeria and Libya. The country entails the Northern reaches of the Sahara desert and the Eastern end of the Atlas Mountains and has a Mediterranean coast. Therefore, the country has a bright diversity on climate and biosphere. 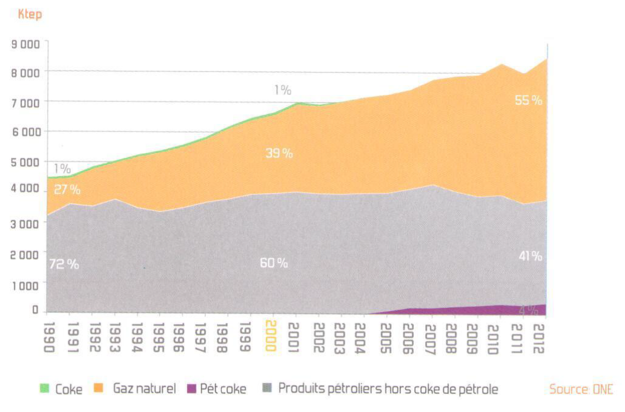 (*) Data not yet officially published

As shown in Figure 2, the Tunisian energy situation has drastically changed in the last two decades. Resulting from the economic development, primary energy demand has risen in a significantly steeper way than production. Consumption nearly doubled within 20 years between 1992 and 2012 from 4,500 ktoe to 8,500 ktoe. Between 1990 and 2000, consumption increased at a rate of 6.2%/year. Between 2000 and 2005, demand grew by 4.6%/year and between 2005 and 2009, annual demand growth slowed to 3.7%, mainly due to energy efficiency measures[5].  In 2014, primary energy consumption was 9,200 ktoe (without biomass), of which 46% was provided by oil products, 53% was provided by natural gas and 1% by renewable energies[3].

Hence the unbalanced consumption illustrated in Figure 2. Tunisia, a net energy exporter until 2000, has become a net importer. In 2014, 49% of natural gas consumption (2,300 ktoe) was covered by domestic production. The remaining 51% (2,400 ktoe) was imported from Algeria[6]. 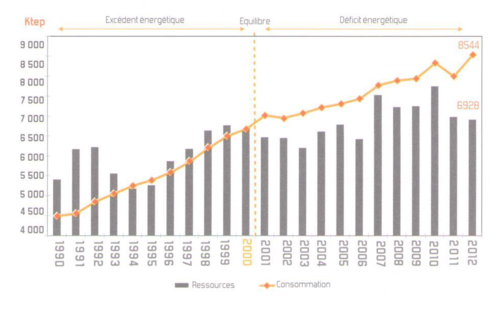 The energy sector is heavily subsidised in Tunisia. Subsidies for natural gas as well as electricity started a sharp increase in the early 2000s. In 2012, energy subsidies amounted to 5,600 million TND (3,100 million EUR), i.e. 20% of public budget or 9% of GDP. Whereas energy subsidies only represented 3% of GDP in 2005. This rise in subsidies is not sustainable for the state and has several negative effects on public spending such as a decreasing budget for public investments[9]. Subsidising procedures remain non-transparent. The subsidy system is composed of indirect and direct subsidies. Indirect subsidies are the difference between supply costs of crude oil and gas for the State, and the selling prices to the two public operators STIR for oil and STEG for natural gas. Direct subsidies are subsidies made ​​directly by the State to STIR and STEG in order to offset their deficits[6].

Currently, renewable energy plays a minor role in the energy supply.The use of solar energy for thermal purposes is widespread in Tunisia and can be regarded as a success story. Since its launch in 2005, the ANME program “PROSOL THERMIQUE”, meant to promote the installation of solar water heaters, has led to an installed capacity of 487,853 m2 in 2012[10].


The first large scale solar power plant of a 10 MW capacity, co-financed by the German development bank KfW and the EU's Neighbourhood Investment Facility (NIF) and implemented by STEG, is due 2018 in Tozeur[15].


Regarding the off-grid use of renewable energies, 11,000 decentralised PV systems have been installed[13].

In 2014, the state-owned company, STEG, remained the major electricity producer, supplying 86% of the demand, followed by an IPP, CPC (Carthage Power Company) which produced 10% of the consumed electricity. The last 4% are produced by small scale producers for their own needs (e.g. industries).

(*)Data not yet officially published

In Tunisia 46% of the electricity was consumed on the low voltage level, 45% on the medium voltage and 9% on the high voltage level.

1Total may not add up due to rounding.

The gas consumption has marked a steep increase (5,344 Ktep in 2013) and 72.5% of its production is used for electricity consumption, 7.1% for the industry sector and 20% for the residential and tertiary sectors.

STEG controls the Tunisian grid and holds a monopoly on electricity transportation and distribution. The grid has three voltages: high (225 kV), medium (150 kV) and low (90 kV). 99.5% of the households have had an access to electricity since 2006.

The transmission grid is connected to the Algerian grid and, on its Eastern end, to Libya. Regional grid synchronisation tests with the participation of Morocco, Algeria, Tunisia, Libya and Egypt have been carried out but failed so far due to frequent synchronization issues with the Egyptian grid. Furthermore, a 400 kV high voltage sea cable with a capacity of 1,000 MW binding North Africa to Europe via Tunisia and Italy is currently discussed[18].

Grid losses are primarily due to maintenance or other incidents. Along with the prolonging of the transmission grid, losses have risen: in 2012 it represented 2,735 GWh[19]. The growing economy of Tunisia and rise of living standards contributed to a significant increase in the electricity consumption leading to ever more often grid saturation. In addition, some power plants and facilities are out-dated and can no longer cope with the actual load of the network; hence, overload, losses and high voltage drops occur on a regular basis. To address these issues, the »Electricity Distribution Network Rehabilitation and Restructuring Project« has been launched, this should improve the reliability and safety of electricity distribution.

Exploration and exploitation of conventional and unconventional fossil resources are carried outin order to address the demand and limit importations. Generally speaking, diversity should help protecting Tunisia from the international prices volatility and reduce its import dependency.


Furthermore, there is a strong need for institutional and budget reforms in the energy sector since the current situation drastically differs from the one 20 years ago. Some of its aspects such as subsidies have become a burden hindering a further development of the whole sector. In November 2014, the Industry Minister M. Ben Naceur called for drastic cuts for the year 2015. Subsidies should decrease from 1.3 billion Euros (2.7 billion TND) to 0.9 billion Euros (1.96 billion TND) in order to use the saved money in investment projects[20]. In 2014, energy prices were raised by approximately 10% in total in order to reduce subsidies. By June 2014, electricity price subsidies for cement producers’ were completely phased out.

Forecasts from the ANME expected the consumption to double by 2030 without implementation of a comprehensive action, therefore energy efficiency should be further strengthened. Measures since 2000 have brought results: Tunisia has reduced its energy intensity by 20%[21].

For more info, see Analysis of the Regulatory Framework for Renewable Energy in Tunisia

The Tunisian Solar Plan, a renewable energy development plan elaborated by the ANME but not officially adopted by parliament or government, foresees a 30% share of renewables in the electricity mix by 2030. This corresponds to an additional totally capacity of 3 GW and an overall investment of 4.75 billion euro[16]. Figure 3 shows the development goals by technology.The Tunisian Solar Plan was updated in 2014, and a new update is planned for 2015. 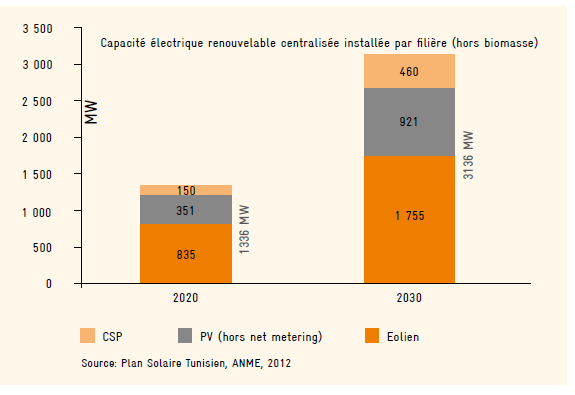 Installed Capacity RE in TUN.png

The law No. 2004-72 on the rational use of energy defines wise use of energy as a national priority and as the most important element of a sustainable development policy. It states three principal goals: energy saving, renewable energy promotion and creation of new forms of energy, that favour costs’ reduction as well as the National economy and the environment.

The National Energy Conservation Action Plan[23] consists of three phases: (1) awareness raising, first concrete and grass-root actions were taken under two programs, (2000-2013) that contributed to an annual decrease of 2% in energy intensity; (2) continued implementation and voluntary investment via the mobilisation of industry, construction and transport (audits, cogeneration, lighting, household appliances, buildings, transport); (3) implementation of large scale projects in order to reach the 30-30 goals ‒ 30% of electricity shall be produced by renewable sources by 2030 ‒ (2020-2030).


The Action Plan also foresees an independent regulator in the electricity market.

Key Actors in the Energy Sector

DGE (Direction Générale de l’Energie, Directorate-General for Energy) is a sub-department of the Ministry of Industry, Energy and Mines. It is designed to conceive, coordinate and implement the national energy policy and to draft energy action plans and energy management programs.


STEG (Société Tunisienne de l’Electricité et du Gaz, Tunisian Company for Electricity and Gas) is the national energy producer, TSO and supplier. The STEG was created by law 62-8 in 1962[24].


STEG Energies Renouvelables, created in 2010, this is a branch of the Tunisian Company for Electricity and Gas fully devoted to renewable energies[28].

STEG is the national utility, it holds a monopoly.

Retrieved from "https://energypedia.info/index.php?title=Tunisia_Energy_Situation&oldid=328207"
Categories:
Hidden category:
Cookies help us deliver our services. By using our services, you agree to our use of cookies.