► Download the Brochure of ER2E Project with information on project activities

Recent years have been marked with an ongoing discussion on the role of renewable energies in the Tunisian energy mix. As in most countries, this question is addressed with different expectations and objectives, typically related to the energy-policy triangle and its characteristic three key elements, namely cost-effectiveness, security of supply and environmental sustainability. Following the Tunisian revolution in January 2011, political and economic constraints have even become more important due to

Within this context, several studies have been conducted by ER2E/GIZ in order to provide input to the discussions on the future energy mix, socio-economic benefits of renewable energy and energy efficiency as well as to the reform of the framework conditions for electricity production from renewable energy.

The foundations of the solar thermal market in Tunisia were laid in the nineteen-eighties. Initially only developing slowly, installations of solar water heaters soared following the implementation of the PROSOL–Programme in 2005. Having successfully installed more than 40 square meters per 1,000 inhabitants, Tunisia is by far the leader in North Africa.

The “PROSOL”-programme started revitalizing the Tunisian solar water heater market in 2005. Designed as a financing scheme, it consists of a capital cost subsidy up to 55 Euros, provided by the Tunisian government, a loan mechanism for domestic customers to purchase SWHs, paid back through the electricity bill and discounted rates on the loans. The suppliers, who act as indirect lenders for their customers, must be accredited by the Tunisian Energy Agency (ANME). Clients eligible for PROSOL must have an electricity service contract with the Tunisian Electricity and Gas Company (STEG). The “Collective Prosol Programme” in Tunisia, a subsidy programme for solar thermal installations in the tertiary sector, started back in 2007. The application rate was low first, but then the commercial solar thermal market gained certain momentum. ANME designed the financial scheme in cooperation with the United Nations Environment Programme (UNEP) in 2008. The programme aimed at the installation of 60,000 m2 of collector surface in the tertiary sector between 2008 and 2011, including 80 hotels. This aim has been missed by far at the end of 2011. The main great achievement of the PROSOL programme has been to succeed in shifting a cashbased market to a credit-based market reducing the weight of such investment on the purchasing power of the population. According to estimates made by ANME, solar thermal technology for water heating could satisfy 70% to 80% of the water heating needs in the residential sector. As of end of 2012, a total of 490.000 m2 have been installed since the introduction of the "PROSOL"-programme in the residential sector for domestic hot water purposes. These SWH are thermosiphon systems with mainly flatplate and some evacuated tube collectors. The number of SWH companies eligible within Prosol has reached 47 by the end of 2010. By the same time, 1,042 installers were active in the market.[1]

For detailed analysis on the Tunisian SWH market, please refer to:

Within the framework of the project ER2E (GIZ) in collaboration with ANME two more publications have been developed. The first one addresses the deployment of SWH beyond small-scale residential appliacations in multi-family / apartment blocks. The second one is a practical guide which sums up best practice installation procedures.

A continuing decline in the price of photovoltaics in 2012 has made photovoltaic projects more economically feasible in many parts the world, including promising emerging markets. This could imply a unique strategic opportunity for Tunisia, which is endowed with high levels of solar insolation and a strong political will to diversify its electricity mix. Targeting significant scale-up potentials will drive costs down and will determine whether Tunisia makes use of its opportunity to benefit from cheap solar electricity in the near future.

However, although international prices for residential photovoltaic systems dropped by 40 percent since 2010, prices in Tunisia have only decreased by 27 percent over the same period. Average price levels are still 25 percent above international levels. Lack of competition and transparency lead to market distortions and price variations in the range of 50 percent per system installed. In 2012 only 4 of 41 suppliers offered system prices close to international levels.

In an effort to stimulate the photovoltaic market, the Tunisian government has introduced first instruments of policy support. Dedicated to residential customers, the implementation of the program PROSOL-Elec in 2010 has mobilized investments to develop about 4 MWp of photovoltaic capacity, 90 percent of which is accounted for by systems of 1-2 kWp capacity. The program provides a grant of 30 % of investment costs (maximum contribution: 2,300 TND per kWp) and access to an optional concessional to cover additional expenditures. Dedicated to the tertiary and industrial sector, the self-production scheme has so far not been successful at developing PV projects. Overall the market for photovoltaics is still poorly developed and has only focused on small-scale residential systems. Photovoltaic plants of commercial scale (up to 1 MWp) and large-scale (more than 1 MWp) have not yet been realized in Tunisia.

Tunisia is currently revising its Solar Plan with the goal of accelerating the development of renewables, including PV, and facilitating legal procedures. In addition, decisions on the future electricity mix for Tunisia are expected for the coming months, which may result in a 10% PV share in electricity production until 2030, resulting in 1,5 to 2 GWp of installed PV capacity by 2030. 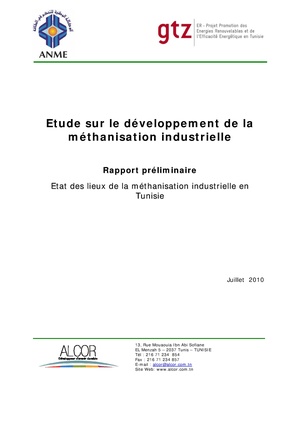 Retrieved from "https://energypedia.info/index.php?title=Promotion_of_Renewable_Energies_and_Energy_Efficiency_in_Tunisia&oldid=112633"
Categories:
Cookies help us deliver our services. By using our services, you agree to our use of cookies.