Enabling PV in the MENA Region

In Jordan the Renewable Energy and Efficiency Law 13 (REEL) of 2012 as well as bylaws enable Independent Power Producers (IPP) to provide electricity from renewable sources to NEPCO within long-term Power Purchase Agreements (PPA). Private investors may also invest in their own Photovoltaic (PV) system up to 5 MWp to directly consume the electricity produced and offset it against their entire demand within a net-metering scheme. The REEL even allows the generation of electricity at a different site than where the actual consumer is located – so-called energy wheeling.

As a result, there are two promising business cases that enable investments in PV:

Apart from off-grid installations, around 3 to 4 MWp of solar PV systems under the net-metering scheme had been realized by April 2014, with another 4 to 5 MWp pending within the application process waiting list.

The analysis focuses in more detail on net-metering with PV, its sub-option of energy wheeling, as well as on Power Purchasing Agreements with the Ministry for Energy and Mining Resources (MEMR) and its state-owned company NEPCO as contract partner. And although tender-based projects exist on government lands, they are not the focus of the study.

At the time of the interviews for the study in late April 2014, the most common way to employ PV systems in Jordan was net-metering at the site of a consumer. Around 3 to 4 MWp had been installed under the scheme, with 4 to 5 MWp under review by the relevant DSOs. According to the directive concerning net-metering, the overall limit for net-metering is fixed at 1% of the gross capacity of the low voltage distribution grid, or approximately 28 MWp, and 1.5% of gross capacity of the medium voltage distribution grid, approximately 42 MWp. This limit was described as purely regulative and to be reviewed if necessary.

The study describes in detail the legal and administrative processes for net-metering, wheeling as well as the direct proposal scheme. For each process step involved actors and delays are mentioned. In case that barriers have been identified proposals are made to clarify or speed up the process. 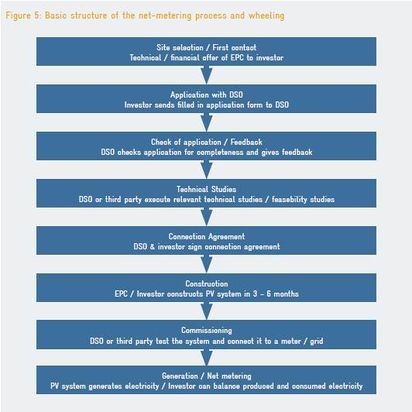 The study simulates PV business cases for different types of PV installations (residential and commercial roof-top, midsize to large industrial) and provides an overview of the most attractive categories. 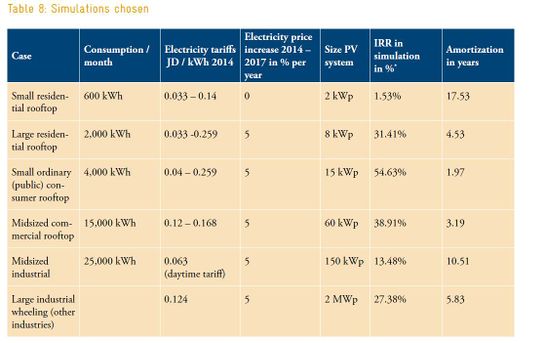 Another attractive option to install PV systems in Jordan is to become an independent power producer (IPP) through the installation of renewable energy plants. Power purchase agreements (PPA) are not new to Jordan however; there have been two IPPs producing and selling electricity with combined cycle plants since 2009. By June 2014, no renewable energy plants had been constructed under the first round of the tender scheme and the following two rounds of direct proposals. In the first round, initiated in 2011, PPAs covering 170 MWp of solar PV were initially signed between 12 IPP companies or consortia and the Ministry for Energy and Mining Resources (MEMR). Until April 2014, these were in the process of financial negotiations between investors and the potential IPPs. In the following two rounds of direct proposals, another 400 MWp of solar PV systems had been tendered for direct proposals, including four 50 MW plants and two 100 MW plants.

With the 3rd Round for expression of interest (EOI), one can note that a standard procedure exists for the Direct Proposal Scheme, though none of the rounds have so far resulted in the construction of PV plants.

The study provides a financial analysis of a Large PV System of 50 MWp for a PPA contract in Round 2 of the Direct Proposal scheme. 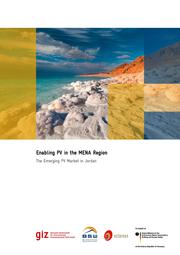 Tunisia is a rapidly expanding photovoltaic market in the MENA region. The country’s economic conditions are relatively favourable, while its natural solar exposure conditions are ideal for photovoltaics, enabling installations to produce more than 1,700 kWh/kWp annually. Regarding public support, the PROSOL thermal programme, introduced in 2005, promotes solar thermal system investments. The PROSOL ELEC programme, designed for photovoltaic installations, has been in existence since 2010. So far, this support mechanism has contributed to the installation of a total PV capacity of 6 MWp. Nearly 150 Tunisian installers are certified by the Tunisian National Agency for Energy Management (ANME). These installers mainly perform installations of small photovoltaic systems, in particular in the private sector.

Photovoltaics Not Connected to the Grid

Photovoltaics Connected to the Low and Medium Voltage Grid

Self-generation mechanisms for the installations that are connected to medium voltage, intended for industrial and service industries, have experienced a slow start since the enactment of the Law of 9 February 2009. Indeed, at the end of 2013, only two installations had been carried out. Over the same period, a dozen grid connection requests were officially forwarded to the Technical Advisory Committee, totalling a capacity of around 900 kWp[1].

The four cases analysed above show us that any photovoltaic system installed in Tunisia is amortised during their 20-year project duration, and this no matter what market segment is concerned. In theory, implemented photovoltaic projects are therefore economically profitable. Several market segments offer an amortization period shorter than 10 years and therefore represent a true investment opportunity. The table below summarises, for the four types of photovoltaic projects, the main results based on the sensitivity analysis and profitability calculations carried out: 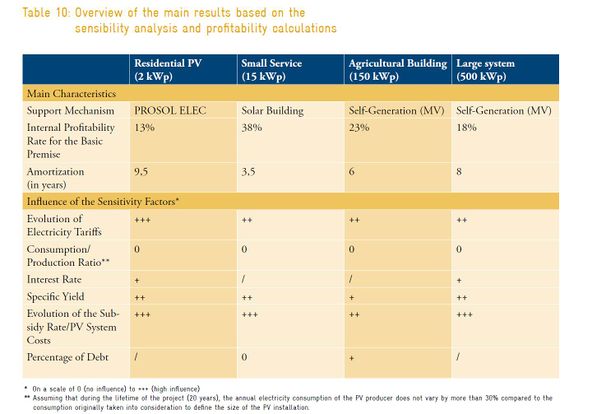 As illustrated in the table above, the case of the commercial PV installation of a capacity of 15 kWp and eligible to the “Solar Buildings” programme benefits from the lowest amortization period. The case of the agricultural building of a 150 kWp capacity is the second most profitable case, with an internal rate of return of 23% and an amortization period of 6 years.

Electricity from photovoltaics (PV) is about to reach grid parity in many countries of the MENA region, as well as generation parity in some countries of the region. More and more governments are promoting large or small decentralized forms of PV projects, which are coupled with the conventional electricity grids. Within this context, the overall goal of the project "Enabling PV" is to contribute to the sustainable use of PV in the MENA region. As the first show case, the project focuses on the emerging solar markets of Tunisia and Jordan.

"Enabling PV" as a project is coordinated by Deutsche Gesellschaft für Internationale Zusammenarbeit (GIZ) within the framework of the regional project "Mediterranean Solar Plan (MSP) – Technology Cooperation". It has been financed in the framework of the International Climate Initiative (IKI) of the German Ministry for the Environment, Nature Conservation, Building and Nuclear Safety (BMUB). The German Solar Industry Association (BSW-Solar) and the consulting company eclareon GmbH are responsible for executing the "Enabling PV" in Tunisia and Jordan.


The project also aims at supporting local renewable energy associations in MENA countries."ENABLING PV" focuses on the following activities in Tunisia and Jordan:

Retrieved from "https://energypedia.info/index.php?title=Enabling_PV_in_the_MENA_Region&oldid=112638"
Categories:
Cookies help us deliver our services. By using our services, you agree to our use of cookies.