How does net metering work?

Net metering means that both the electricity produced and consumed by a household or investor is measured. The prerequisite for net metering is economic viability of the net-metered electricity source compared to the grid price. This is also referred to as grid parity, a situation where it is cheaper to produce one's own electricity than to buy it from the national utility.

The basic elements of net metering are: 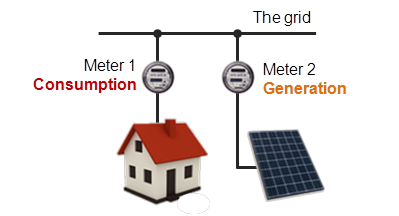 How and Where Has Net Metering Been Applied

Net metering has been successfully implemented in both developed and developing countries.

While the ways in which these countries have gone about impelenting the regulation differs according to the context, several elements are recurring:

The following table provides an overview of countries where net metering policies are currently in use:[6]

Net metering is also being developed and piloted in the following low-income countries:

Pro's and Con's of Net Metering

There are two cases to be made for applying net-metering in developing countries:

The economic case is primarily built on the fact that certain renewable energy generation costs have reached, or will shortly reach, grid parity in many developing countries.

For the energy authorities in developing countries, the regulatory/policy case is based on the following reasons:

There are however also challenges and risks involved[3]:

Retrieved from "https://energypedia.info/index.php?title=Net_Metering&oldid=236787"
Categories:
Cookies help us deliver our services. By using our services, you agree to our use of cookies.