The Senegalese energy sector is relatively small. Total fossil fuel provision stands at 27 TWh/year, thereby making up nearly 40% of Senegal's primary energy provision of which the remainder is nearly entirely biomass (well over 50%) - most of which non-renewable - complemented by some coal and some hydro and solar for renewably generated electricity.

In terms of consumption, the large biomass share in energy provision is for the by far biggest part used for cooking in households, either as firewood (58% of households) or after carbonisation as charcoal (26 % of households). In addition 11% of households use LPG for cooking (mainly in bigger towns), 4% use electricity and 1% uses lampoil. The LPG share thereby is smaller than one would expect based on prevalence of LPG stoves (e.g. in Dakar, where 20% of Senegal's population lives, over 90% of households have LPG stoves) - as LPG supply is not always reliable, in which case (urban) households fall back on charcoal.


Cooking overall also easily accounts for the largest share of household energy consumption; while the electrification rate at 45% is not even very low, electricity consumption in households is still limited.

In total only some 10% of final energy consumed concerns electricity, largely generated by fossil fuels (diesel-gensets) and for a small part renewably (hydro, wind and solar). The renewable potential however is large, and little by little is getting recognised : along the coast there's good potential for windpower; irradiation throughout the country at 5-7 kWh/m2/day is favourable for PV, in addition to which there's hydropotential along major rivers - though with rainfall predicted to decline by some 20% over the next decades, hydro’s role in Senegal’s energy mix should be carefully tailored.

The below diagram shows the development over time of the energy consumption of households, transport and industry. 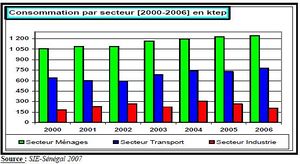 As a whole, the energy-sector has to deal with inefficient technologies, a low density distribution grid, a lack of regulatory framework and weak financial structures.

As biomass accounts for more than half of Senegal's energy consumption, the pressure on Senegalese forests is high, and the use of biomass for cooking is responsible for a large part of the depletion of the country's forest stocks. In the medium term deforestation will create bottle-necks in the supply of cooking energy, particularly for the poorest households.

Demand for charcoal from Senegalese forests also may well increase if and when subsidies for LPG would be phased out in reaction to pressure from the West African Monetary Union, prompting poorer households to return to their traditional fuel usage patterns. Thereby the effect might be aggravetd as particulalrly such poorer households might not be able to afford efficient (charcoal) cookstoves - implying they'd subsequently use low efficiency charcoal stoves.

In the urban and peri-urban Dakar region, the high demand for traditional fuels nowadays can only be exploiting wood sources up to 500 km away from the capital. While Senegal still counts a relatively high share of primary forests, deforestation leads to annual forest-losses of 0.5 percent, which comes close to the average of Western African countries. Anyway, figures from FAO on Africa and Senegal in particular indicate that agricultural land clearance eventually will become, or already is the predominant cause of deforestation.

Due to the high demand, the price of charcoal increased by 42 percent between 2005 and 2008, which is, however, still less than the increase in the ceiling price for LPG that increased by 48 and 63 percent for the two main bottle sizes (3.5 and 6 kg) respectively. Thereby, cooking energy increased disproportionately compoared to the 14% increase in general consumer prices in the same period. .

In the 1970’s the government launched the national butanisation programme in order to re-place charcoal consumption by Liquefied Petroleum Gas (LPG) through subsidies and promotion campaigns, resulting in around 70 percent of urban households in Senegal and nearly 90% of households in Dakar using LPG as primary cooking fuel. The Senegal Ministry of Energy estimated the annual saving of firewood and charcoal to be 70,000 tons and 90,000 tons, respectively. To learn more about the project, click here.
Nevertheless, biomass resources and wood in particular continue to be unsustainably ex-ploited.

Since the year 2000 electricity production increases by approximately 7% annually and stood at 2,8 TWh in 2012. Over 80% of its generation results from fossil fuel powered plants / gen-sets, 2% from gas power plants, 2% from co-generation, 10% from hydropower plants, and 2% from other renewable sources (PV, wind, some renewable biomass). At present approximately 5 GWh/year is produced decentralized with PV application.

As demand for electricity grows a lot faster than its supply, Senegal is facing serious problems. The national utility SENELEC lacks an efficient organisational structure and lacks (access to funds for) investments in powerplants and transmission-lines in order to cope with the increasing demand. Reserve capacity presently is insufficient, causing frequent (scheduled or unscheduled) outages of whole districts, while transmission losses, old thermal power plants and increasing oil prices result in high average production costs. The below graph shows consumption and capacity over time, underpinning the above. 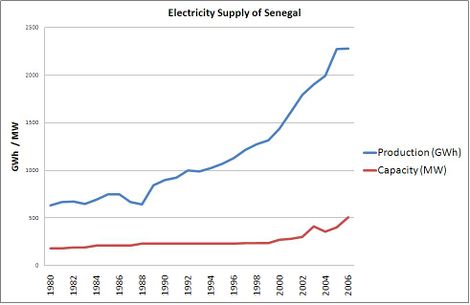 Nevertheless and in comparison to neighbouring countries, the electrification rate is relatively high: at 75% in urban areas and 17% rural, the national average is 45 %, up from approximately 30% a decade ago. In comparison, in neighbouring Mali national coverage is just 25%. However, this (rural) coverage also implies the governments' ambitious target to achieve 50% rural electrification by 2012 has not nearly been achieved.

Senegal’s total installed capacity is 638 MW (2010 est) of which 80% is connected to the national grid. SENELEC owns power stations with nearly 60 % of the total production capacity while the remainder is private, either GTI-Dakar or ESKOM-Manantali.

As indicated above, over 80% is generated by diesel plants, while there are also gas-, steam- and gas-steam power plants. As a result electricity production costs strongly depend on the world market oil-price and the local Diesel price, both for the national grid as well as mini-grids. However, due to subsidies the consumer price is kept artificially low.

Some 10% of the total instyalled capacity comes from the 60 MW that Senegal uses of the 200 MW Manantali hydroelectric power plant at the border with Mali.

There are two grid-systems: the 90 kV national grid and the 225 kV supranational grid, together totalling some 13,000 km. Both are managed by SENELEC. The grid mainly supplies urban areas around Dakar, Thies, St. Louis and Kaolack/Fatick with electricity. But there are several isolated networks in order to power some remote areas. 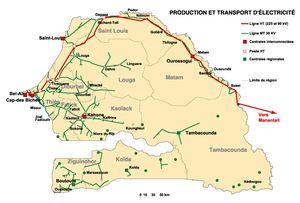 All distribution is carried out by SENELEC. </div>

While rural electrification stands at 17%, for the larger part this again concerns larger villages and relatively densely populated rural areas. However, nearly half the rural population lives in small villages (< 500 inhabitants) that are of little interest to private investors due to relatively high investment costs and low revenues.

The Senegalese Agency for Rural Electrification (ASER) is responsible for the implementation of the model (see Public Institutions and Actors).

For the PPER all of Senegal is divided into concession zones (9 concessions remain after a consolidation). International donors and the Senegalese government provide subsidies to concessionaires for their rural electrification activities. Donors involved entail the World Bank, the German development bank KfW and the African Development Bank. Subsidies amount to 70 % of funds required for investment and engineering. The concessionaire contributes 20 % and the users 10 %. End users are charged cost covering tariffs. All donors have dedicated a share of their funds (ca. 15 %) for the installation of renewable energy systems.

The first concession was awarded in 2008. Within the large concession areas municipalities can apply for ERIL loans (Electrification Rurale d’Initiative Locale – rural electrification through local initiatives) to implement electrification projects themselves. For ERILs, the same 70/20/10% funding distribution applies as for the PPER concessions. For all ERILs a seperate application has to be prepared and submitted, which should subsequently be approved by ASER and the PPER concessionaire for the region concerned.

The concessionaires eventually will only reach a part of the rural population. In line with ASER's current strategy, in the coming 10 to 15 years only villages in the relative vicinity of medium tension power lines will be supplied with electricity. In the concession zones of KfW in the Peanut Basin and the Casamance, for example, about 1 million people in 2,600 villages will not be connected to the grid in the foreseeable future.

Although in principle the two concession models of ASER (large-scale concessions (PPER), and concessions based on local initiative (ERIL)), in conjunction with the tariffs set by the regulatory authority, ensure profitability for the operators and thus continued maintenance (and hence sustainability), in practice operation of ERILs proves more expensive than anticipated - rendering their operation unsustainable. Moreover it lasted years until th elegal framework for ERILs was ecventually fully finalised. Only very recently (late 2013) the first ERIL got fully and completely legal.

Institutional Set Up and Actors in the Energy Sector

In 1997 Senegal began a reorganisation of its electricity sector following recommendations by the World Bank. It was decided to privatise the public utility SENELEC, to found the "Agence Sénégalaise d’Electrification Rurale" (ASER – Senegalese Agency for Rural Electrification) and to put in place the "Commission de Régulation du Secteur de l’Electricité" (CRSE – Regulatory Commission for the Electricity Sector).

The Ministry of Energy (Ministère de l’Energie) as the lead agency is in charge of formulating, coordinating, and setting overall objectives, policies, strategies, and general directives for the entire energy sector. Furthermore it is authorized to issue directives to SENELEC.
The CRSE

ASER was founded in 2000 and is the governmental agency which is charged with the task of rural electrification. It is financed by the Senegalese government and international donores (such as Worldbank, DGIS, GIZ, KfW, AfDB, IsDB). ASER tends the concessions for rural areas for private investors and finances 70% of the projects (see Rural Electrification section). Urban electricity supply remained within the responsibility of SENELEC/CRSE.

During the 1990s, Senegalese companies sold about 2,000 PV systems per year, but the reorganisation of the electricity sector had a negative impact of the nascent Senegalese market for solar energy systems. Only few solar companies survived the reform. However, with increasing poopularity of PV systems many new entrants have entered the market and at present there's some tens of PV companies, though there's only of handfull of some meaningfull size. Such companies are mainly involved in installation and service for donor-funded systems while the market for unsubsidised systems is small.

The SEM Fund, or the Senegal Ecovillage Microfinance Fund, is a nonprofit organisation dedicated to poverty alleviation by providing affordable business loans aimed at strengthening the business skills and livelihoods of highly motivated microentrepreneurs that lack access to the commercial banking system.

A renewable energy law came into effect late 2010. The law is kept rather general. All details will be determined in by-laws which are currently being elaborated. The text of the law can be found here.

Senegegal´s Poverty Reduction Strategy Paper (PRSP) pushes the poverty reduction agenda forward so as to meet the objective of raising economic growth to about 7 percent per year necessary to halve poverty by 2015, in line with the targets set out in the New Partnership for Africa's Development (NEPAD) and the Millennium Development Goals (MDGs).

The PRSP names ten overall objectives for the development of the energy sector:

The Lettre de Politique de Développement du Secteur de l’énergie (LPDSE) was approved in 2008 to cope with the fundamental problems of the energy sector. There are six main objetives:

Senegal already has some key adaptation elements in place. The country has a national contingency plan that includes studies of natural disasters such as flooding, and of the areas where disasters might occur. Maps showing projected cloud cover and wind speeds are available. Biomass consumption is also being tackled with substantial research on biomass issues and promotion of improved woodstoves.

Flooding of thermal plants in some cases is a realistic threat that will need to be addressed. Already one plant has suffered severe damage from heavy rains.