Access to Electricity for Productive Uses of Energy and Economic Development 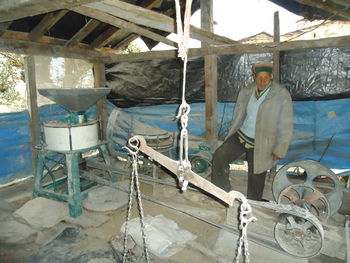 Access to infrastructure is one of the basic requirement for the development of an economy and it holds its importance especially in the context of off-grid rural areas which are generally lagged behind in most of the developing countries. There are different elements which constitute infrastructure such as road, water, sanitation, electricity, health, telecommunication etc. Each one contribute and complement other elements in achieving overall development of a region or a country. Access to electricity is perceived to be a key requirement for poverty reduction by enabling the creation and improvement of income generating activities.

India being a fast developing country is actively pursuing rural electrification since decades. However, major push for electricity for all came out in 2003 with the passing of Electricity Act 2003. The use of electricity was mainly for two purposes i.e. household consumption and commercial consumption. Although government has extended its support in laying down grid infrastructures in  the villages and also supported Below Poverty Line (BPL) families in providing free of cost for connection, there was limited focus on active promotion of electricity for commercial uses. Although Rural Electrification policy acknowledges the role of electricity in productive activity and livelihood generation in rural areas, and requires especial efforts to be made to promote economic activities through electricity provision. There are few studies who attempted to establish direct relationship between access to electricity and productive uses of energy[1] leading to economic development. The relationship between access to electricity and productive uses of energy is inconclusive and need more comprehensive research. Most of the studies are country specific, adopt different methodologies, control group and time frame. In the context of India, we have one positive example where providing electricity for irrigation pumps by heavily subsidizing electricity rate has resulted in increase in agriculture productivity – but this is grid connected and not an off grid example.

In the context of Uttarakhand, Uttarakhand Renewable Energy Development Agency (UREDA) has been providing electricity to villages located in the remote and far-flung areas through decentralized off-grid MHPs. About 42 MHPs of cumulative capacity 4210 KW (4.2 MW) have been constructed so far and are providing electricity to about 136 villages and 148 hamlets. UREDA has adopted an approach that called for greater communities/societies participation towards establishing and managing these MHPs. Electricity is being used at household level as well as commercial level. However, in order to assess economic development in these areas due to access of electricity has not been thought about or has limited research.

Under this context, a study was undertaken to investigate whether micro hydro projects have led to productive uses of energy and in turn led to economic development in local area. The research presented in this report has sought to explore the question through a review of existing literature, field survey which included semi-structured interview and informal group discussions. The survey was conducted at five Micro hydro sites and villages who are beneficiaries of the power plants. These sites are Milkhet, Ramgaad, Toli, Taluka and Istergaad in the state of Uttarakhand. The sites were selected where some cognizable instances of use of Micro Hydro Power for productive purposes were reported.


Table 1: Table showing responses of beneficiaries as to the goods aspects about use of power from Micro Hydro Power Plants as per their perception (N=538) — (Multiple responses)

There are few cases, as mentioned below, the use of power generated through MHP may be treated as the cases having resemblance to productive use of energy:

The research has also highlighted uni-directional causality running from economic growth to electricity consumption. In the religious places like Gangotri and Yamanotri, many enterprises in the form of hotels, restaurants have mushroomed up. Due to requirement of electricity for the temple, government has established micro hydro power plants mainly for consumptive purposes. However, access to electricity has also resulted into increased hours of operation in the markets, less dependency on diesel in the market, pilgrimage are able to reach the temple during night time, safety of women is enhanced and protection from wild animals ensured.

The findings have also revealed that profitability of micro hydro power plants sometimes increases due to intermittent uses of electricity for commercial purposes such as wood cutting during the construction of houses, use of wielding machines during construction of houses, marriage ceremonies where power plants charged fixed cost and made some profit. However, these uses are not consistent.

On a social development front, majority of the respondents highlighted the gains relating access of electricity such as children are now getting extra time in evening for their study, time saving caused to women because of extra hours available to them in late evening and early morning due to availability of light, which they used for disposing of household chores, access to television has resulted in to entertainment and infotainment etc.

Based on the above findings, the research has strengthen the past research outcomes where combining electricity access with other enabling factors to achieve economic development has been reiterated. It is clear that access to electricity is important but its contribution has to be matched by particular needs of the communities, access to finance, skill development and market linkages.

Retrieved from "https://energypedia.info/index.php?title=Access_to_Electricity_for_Productive_Uses_of_Energy_and_Economic_Development&oldid=266666"
Categories:
Cookies help us deliver our services. By using our services, you agree to our use of cookies.