There are a wide variety of biomass energy resources, including tree and grass crops and forestry, agricultural, and urban wastes. Biomass is the oldest source of renewable energy known to humans. It is a renewable energy source because the energy it contains comes from the sun. Through the process of photosynthesis, chlorophyll in plants captures the sun's energy by converting carbon dioxide from the air and water from the ground into carbohydrates, complex compounds composed of carbon, hydrogen, and oxygen. When these carbohydrates are burned, they turn back into carbon dioxide and water and release the sun's energy they contain.
There are many types of plants and many ways in which they can be used for energy production. In general there are two approaches: Energy crops - growing plants specifically for energy use, and biomass residues - using the residues from plants that are used for other things. The best approaches vary from region to region according to climate, soils, geography and population.
Wood is still the largest biomass energy resource today, but other sources of biomass can also be used. These include food crops, grassy and woody plants, residues from agriculture or forestry, and the organic component of municipal and industrial wastes. Even the fumes from landfills (which are methane, a natural gas) can be used as a biomass energy source[1]. 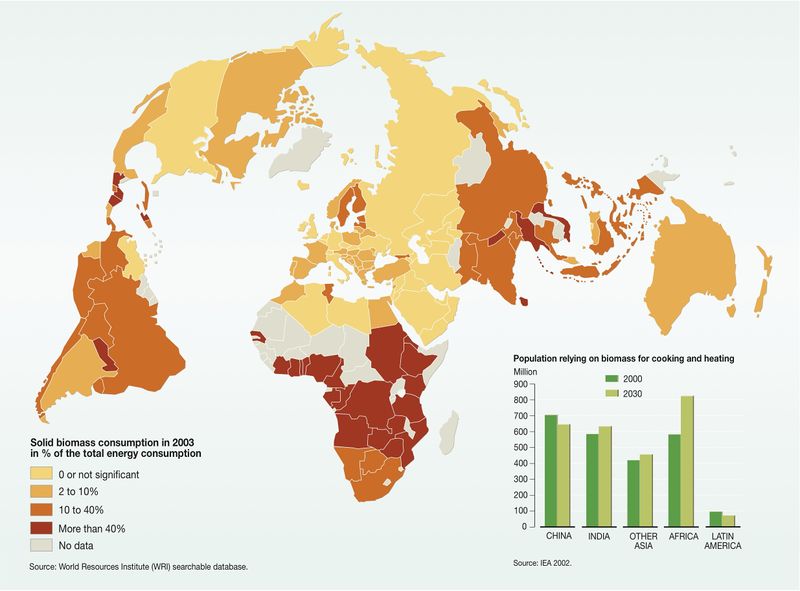 A number of non-combustion methods are available for converting biomass to energy. These processes convert raw biomass into a variety of gaseous, liquid, or solid fuels that can then be used directly for energy generation. The carbohydrates in biomass, which are comprised of oxygen, carbon, and hydrogen, can be broken down into a variety of chemicals, some of which are useful fuels.

This conversion can be done in three ways:

When plant matter is heated but not burned, it breaks down into various gases, liquids, and solids. These products can then be further processed and refined into useful fuels such as methane and alcohol. Biomass gasifiers capture methane released from the plants and burn it in a gas turbine to produce electricity. Another approach is to take these fuels and run them through fuel cells, converting the hydrogen-rich fuels into electricity and water, with few or no emissions.

Bacteria, yeasts, and enzymes also break down carbohydrates. Fermentation changes biomass liquids into alcohol, a combustible fuel. A similar process is used to turn corn into grain alcohol or ethanol, which is mixed with gasoline to make gasohol. Also, when bacteria break down biomass, methane and carbon dioxide are produced. This methane can be captured, in sewage treatment plants and landfills, for example, and burned for heat and power.

Biomass oils, like soybean and canola oil, can be chemically converted into a liquid fuel similar to diesel fuel, and into gasoline additives. Cooking oil from restaurants, for example, has been used as a source to make "bio diesel" for trucks. Bio diesel can also be produced using algae as a source of oils. Biodiesel is made by combining alcohol (usually methanol) with vegetable oil, animal fat, or recycled cooking grease. It can be used as an additive (typically 20%) to reduce vehicle emissions or in its pure form as a renewable alternative fuel for diesel engines[1].

Biomass can be used for fuels, power production, and products that would otherwise be made from fossil fuels.

In such scenarios, biomass can provide an array of benefits which include:

Retrieved from "https://energypedia.info/index.php?title=Basics_on_Biomass&oldid=272092"
Categories:
Cookies help us deliver our services. By using our services, you agree to our use of cookies.