Biogas is a gas that is produced during the anaerobic degradation of organic materials. It is primarily composed of methane (60%-70%) and carbon dioxide (30%-40%). Biogas also has trace amounts of other components such as water vapor, hydrogen sulfide and ammonia.


Because of its composition, biogas is a greenhouse gas that is detrimental to the environment and an important factor in climate change. Another byproduct that is produced, called “digestate” also provides a rich fertilizer that can be used in agricultural and gardening practices.

The World Bioenergy Association estimates that if fully utilized, biogas could cover close to 6% of the global primary energy supply – equal to one quarter of the current consumption of natural gas. Currently 30 million tons of methane emissions are produced worldwide each year from agricultural operations, if this waste were treated through anaerobic digestion, it is estimated about half of these 30 million tons of methane emissions could be avoided. However, biogas deployment at the global level has been slow on the uptake due to several factors:

Global data on current installed capacity of biogas plants does not exist, but the World Bioenergy Association estimates that 40 billion m3 biomethane equivalent – equal to 1080-1440 PJ of energy - is produced annually. India and China are global leaders in the biogas field with an estimated 4.5 million biogas plants in India and over 40 million biogas plants in China. While these plants range in size and technology from a few m3 to large commercial scale plants, the majority are small household systems that are used to produce gas for cooking, heating water, and lighting.[1]

The high organic content of municipal solid waste in low- and middle income countries (up to 60%) causes numerous problems in the handling and disposal of the waste. Banning the dumping or landfilling of organic waste is therefore of great benefit: it reduces the generation of landfill gas, relieves the pressure on scarce landfill capacities and mitigates all of the conflicts, costs and social burdens involved.


By reintroducing recyclables into value chains, the use of a biogas technology that uses waste as feedstock promotes a circular economy. The advantages are twofold: (1) energy is recovered and (2) the nutrient cycle is closed.


Benefits and co-benefits of anaerobic digestion include:

Methane is combustible gas with the scientific formula CH4. It has a heating value of 34.4 MJ/m3 and a greenhouse gas global warming potential of 25 times that of carbon dioxide when emitted from human activities. Methane is also formed in many natural processes such as in wetlands, natural gas seeps, and intermittently from saturated soils. It is part of the natural carbon cycle. When methane is oxidized to the atmosphere it forms carbon dioxide (CO2) and water (H2O).


The methane formation process is comprised of three steps: 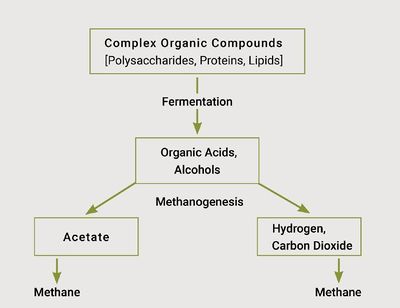 
Hydrolysis of insoluble and complex soluble compounds to form organic acids and alcohols.


Reduction of organic acids and alcohols formed in Step 1 to acetate, hydrogen, and carbon dioxide.


Further reduction of the products produced in Step 2 to methane and carbon dioxide.


This process is part of the global carbon cycle, which involves the fixation of carbon as CO2 by photosynthesis and the subsequent release as the organic matter synthesized decomposes anaerobically. The microorganisms responsible for Steps 1 & 2 reproduce more rapidly than the methane forming bacteria. If the population of methane forming bacteria is not adequate to reduce the organic acids and alcohols as they are produced, accumulation will occur.


Although the organic acids are sources of energy and carbon at low concentrations, they become toxic at higher concentrations. Thus, the absence in balance between the fermentation and methane forming bacterial populations can cause methane formation to be inhibited.

Carbon dioxide is a primary greenhouse gas with the chemical formula CO2. Carbon dioxide is produced and absorbed by many organisms naturally such as plants, animals, and microorganisms. This CO2 is part of a natural environmental balance. However, when human activities also produce CO2 as a byproduct this balance is upset and new ways must be derived to treat CO2 in order to mitigate the effects of climate change caused by the release of primary greenhouse gases into the atmosphere.[2] 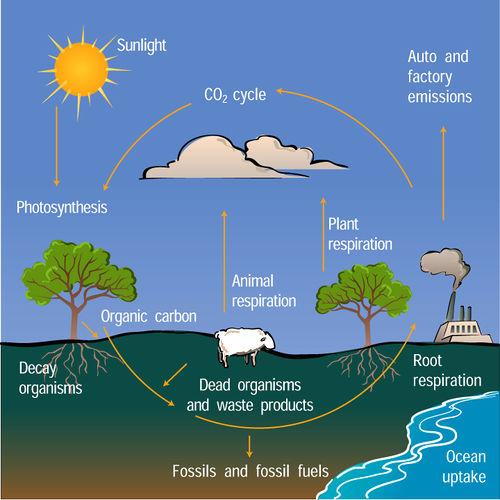 Retrieved from "https://energypedia.info/index.php?title=Biogas_in_Powering_Agriculture&oldid=322297"
Categories:
Cookies help us deliver our services. By using our services, you agree to our use of cookies.