The Brazilian National Fund on Climate Change (Fundo Nacional sobre Mudança do Clima or Fundo Clima, FC) was established in 2009 by law 12.114 “with the aim of ensuring resources to support projects or studies and finance initiatives that focus mitigation of climate change as well as adaption to climate change and its effects”[1], and further regulated in 2010 by Decree 7343[2]. Fundo Clima is mainly financed by revenues generated from a tax on oil companies, but article 03 of Law 12.114 also authorizes it to receive donations from public and private national institutions, international loans and donations. It is managed by a multi-sector steering committee presided by the Brazilian Ministry for the Environment (Ministério do Meio Ambiente, MMA) and operates in two modalities – non-refundable and refundable resources. Refundable resources are operated by the Brazilian Development Bank (Banco Nacional de Desenvolvimento Econômico e Social, BNDES) and, at low interest rates, offer loans for mitigation and adaptation projects and technologies in areas such as urban mobility, sustainable cities, renewable energy, efficient machinery and equipment, among others[3]. Non-refundable resources are directly managed by the MMA, until now mostly directed towards adaptation projects and measures.


The table below shows Fundo Clima´s financial resources indicated by the National Budget.

To strengthen the institutional and operational capacity of Brazil´s National Climate Fund, cooperation between MMA and Deutsche Gesellschaft für Internationale Zusammenarbeit (GIZ) GmbH[4] started in 2012. In this context, GIZ provided technical advice with a focus on improving management models and tools.


A factsheet about Brazil´s Fundo Clima is available here:

To learn and benefit from experiences with other funds, a desktop study about GIZ´s international experiences with institutional strengthening of other climate funds was elaborated at the beginning of the cooperation between GIZ and Fundo Clima:

“It´s not just the money” presents lessons learned from technical assistance and capacity development projects with funds and supported the discussions about the objectives and activities of the cooperation between Fundo Clima and GIZ. Main critical issues in setting up funds are shown in the following graph: 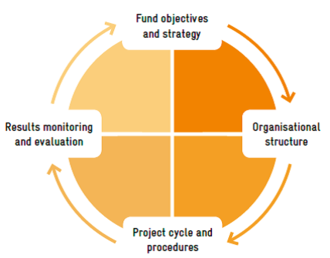 The management procedures and tools used by Fundo Clima throughout its project management cycle were then identified and analyzed. As a result, three tools from the selection phase were developed or optimized. They are available at Fundo Clima´s website:

The project proposal guidelines complement the project proposal template by providing instructions and explanations for each of its items. These guidelines allow proponents to clarify their doubts by themselves, with the aim of improving the overall quality of the projects, reducing demand for clarifications to the Fund´s staff and correction´s requests.

The glossary of concepts presents definitions of selected concepts to detail expressions used in the project proposal template, project proposal guidelines, and in other managing and administrative documents and procedures.

Retrieved from "https://energypedia.info/index.php?title=Brazilian_National_Fund_on_Climate_Change_(Fundo_Clima)&oldid=107933"
Categories:
Cookies help us deliver our services. By using our services, you agree to our use of cookies.