Over the last decade, Brazil has worked intensively to take advantage of its huge wind energy potential - estimated between 60 and 143 GW with measurements at a height of 50 m and around 250 GW at 150 m.

After the foreseen installation of 1.422 MW within the federal promotion scheme PROINFA, the construction of wind energy plants is now implemented by reverse auctions carried out by CCEE (Câmara de Comercialização de Energia Elétrica) and planned by MME (Ministerio de Minas e Energia) and EPE (Empresa de Pesquisa Energética). During the first auction exclusively for wind energy in December 2009, some 1.800 MW were awarded as PPAs by CCEE to the lowest bidders at an average price of approximately 60 €/MWh, as can be seen in table 1.

Subsequent auctions took place on days 25 and 26 of August 2010, for which 10.569 MW belonging to 399 wind farms have been registered, out of which 1,5 – 2 GW are likely to be contracted. The reverse auctions have boosted the Brazilian wind energy market significantly, which surpassed 600 MW of installed capacity at the end of 2009. Moreover, the number of investors, project developers and producers is steadily growing. More details concerning the framework of the wind energy auction 2009 and location of projects can be found in tables 2 and 3.

The Clean Development Mechanism (CDM) is a flexible mechanism within the Kyoto-Protocol, that aims to reduce green house gas (GHG) – emissions in a cost effective way and to promote sustainable development of countries not listed in the protocol’s annex I. It is the only mechanism that includes developing countries in the global effort to combat anthropogenic climate change. For approval, a CDM-project has to pass several hurdles, such as development of a Project Design Document (PDD), validation by a DOE (Designated Operational Entity), obtaining a letter of approval of the host country’s DNA (Designated National Authority) and registration at the EB (Executive Board), which issues the CERs (Certified Emissions Reductions). 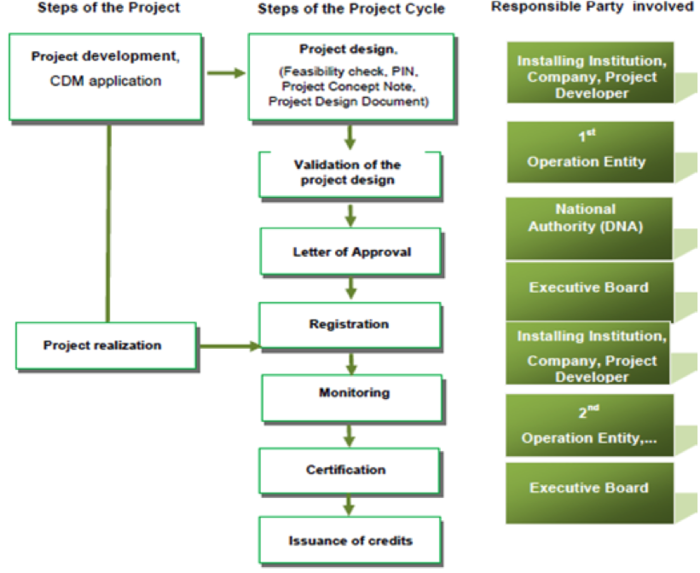 Brazil is the third largest CDM-market worldwide regarding registered projects and has considerably contributed to the introduction of this emission reduction scheme, which has attracted accumulated investments of approximately 3,1 billion US$ at national level. The vast majority of CDM-projects in Brazil is developed in the areas of electricity generation with biomass, small hydro power, methane avoidance or landfill gas, whereas wind energy accounts for only a marginal fraction with four registered projects until now.

With a total of 13 wind energy projects in Brazil listed in the CDM pipeline of UNEP Risø, this technology accounts for only about 2 % of listed Brazilian CDM-projects, about 512 t of CO2 emissions avoided until 2012 and has a market value of 4,1 Mio. €, according to the expected amount of kCERs and at a market price of about 12 €/ tCO2. Out of these 13 projects, only four have already been registered, with a total amount of 163,5 t of CO2 to be avoided until 2012 for sure. The rest is still at validation (8) or has been stopped (1). With a projected growth of 3,8 GW of wind energy capacity due to the auction in 2009 and a second auction in 2010, an emission reduction potential of 2.871 kTCO2 with a market value of 105 Mio. € (according to current CER prices 12 €/tCO2) could be tapped if all auctioned projects were registered under the CDM. This clearly shows that Brazil has a largely untapped CDM potential in the area of wind power.

Market Barriers for CDM Projects with Wind Energy in Brazil

According to a study drawing on expert interviews conducted with project developers and DOEs, several market barriers jeopardize the development of CDM projects with wind energy in Brazil. One of the reasons that prevented the development of such projects was a presidential decree declaring that all CERs generated within PROINFA projects should become property of Eletrobrás. This regulatory barrier has been removed for the current reverse capacity auctions as declared in Portaria 52/ 2009 , but other impediments remain, such as excessive time spans for project validation and registration. In 2009 about 548 days were needed on average worldwide for wind energy CDM-projects between start of validation and beginning of registration at the EB. Delays in the CDM process can be attributed to a lack of qualified staff at Brazilian DOEs, particularly strict requirements of the national DNA and problems faced by project developers at proving project additionality. The latter issue has been complicated by UNFCCCs rulings on CDM, which penalize the existence of national policies conducive to renewable energy development. Although recent reform efforts by the EB sought to eliminate these “perverse” incentives, the responsibility of determining the impact of policy measures on project additionality has now been passed on to DOEs. This increases liability risks for these validating companies and could lead to even longer validating periods. Another major obstacle to CDM-projects involving wind energy is the low baseline emission factor of about 0,2 – 0,3 tCO2/MWh of the Brazilian electricity grid, which is heavily dependent on hydropower generation. As a consequence, in Brazil lower emissions reductions relative to the baseline scenario can be achieved. This leads to fewer CERs as in comparison to other host countries that boast emission factors four to five times higher, such as China or India. Moreover, regarding the future of global carbon trade and CDM after 2012, uncertainty prevails with no consecutive agreement in place for the post-Kyoto period, sending investment, project registrations and prices down. Given the requirements for validation and registration, CDM-projects have to be started in 2010 in order to be safely registered before December 31 2012.

Given the positive factors that contribute to wind energy deployment using CDM, such as its vast potential, complementarity with hydropower in the northeastern states and the huge amount of submitted projects during the capacity auctions, a stronger market development of CDM using wind energy in the near future is feasible. Revenue by CERs can contribute to finance approximately 2% of CAPEX of wind energy projects and can lower the electricity price offered in the auctions by 5 – 15 R$/MWh. At the moment several wind farms are developing applications for registration as CDM activities, including a project developer comprising 45% of the capacity auctioned in December 2009 in 4 projects. A profound reform of the CDM which harmonizes Brazilian legislation for renewable energies and the international carbon trade mechanism provided by UNFCCC could boost the development of these projects with wind energy. Thanks to recent reforms and reverse auctions more project submissions with wind energy can be expected in the near future, but this development might come to a sudden end if no successive agreement to the Kyoto protocol can be reached. Nonetheless, all contacted market players are confident that global carbon trade will continue to play an important role after 2012 and that it can contribute significantly to make wind energy projects in Brazil economically feasible.

This article has been prepared in collaboration with the Gesellschaft für Internationale Zusammenarbeit (GIZ) GmbH Energy Programme Brazil.

Retrieved from "https://energypedia.info/index.php?title=Clean_Development_Mechanism_(CDM)_and_Wind_Energy_Projects_in_Brazil&oldid=88363"
Categories:
Cookies help us deliver our services. By using our services, you agree to our use of cookies.