Coal is a black, solid, carbon-rich mineral found underground. Coal stoves are not so often used as cookstoves on their own, they are rather utilized in regions where cooking and space heating are combined.

For more information on coal as a fuel, see Cooking with Coal.

A wide array of stoves exist ranging from mobile coal stoves without chimneys to fixed stoves with the potential of complete combustion. Because of the high temperature of fires using coal, metal stoves (excluding cast iron) are not suitable for coal combustion, as they get deformed and their life span is short. Therefore, a liner (made of clay, chamotte slab, etc.) for the stoves is required in order to improve the combustion of coal, to protect the metal from full exposure to the heat and to increase the durability of the stove.

In contrast to traditional cookstoves, improved coal stoves typically have smaller combustion chambers, grates and air intakes that direct air through the burning coal from underneath; they also may have internal chimney baffles to slow the upward movement of hot exhaust so that it can provide additional room heating before exiting the chimney.

While coal has a high heat value and can glow for a long time it also produces dirty carbon dust. 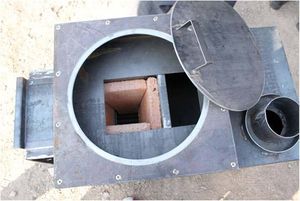 In Ulaanbaatar, Mongolia, GIZ developed an improved version of the traditional sheet metal ovens for the dwellers of yurts. This type of oven is characterized by a higher efficiency and a high combustion temperature (> 1000°C) resulting in complete combustion, hence significant lower CO and less PM 2.5 emission. Additionally, no coal briquettes are necessary as small coal and wood pieces are used as fuel in the stove. [1]

One-third of Chinese households cook with coal on inefficient cookstoves. Coal stoves for cooking or heating are also used in Central Asia and South Africa to a wider extent. In South Africa, household coal use is estimated at 3% of total coal consumption, and an estimated 950 000 households use coal as a household energy source.


Through incomplete combustion of coal the same pollutants as biomass emissions (e.g. carbon monoxide, particulate matter, etc.) are emitted; in addition, coal emissions contain toxic elements such as fluorine, arsenic, lead, selenium, and mercury, which are not destroyed by combustion.[2] This can lead to serious negative health impacts. The World Health Organization thus does not recommend the use of unprocessed coal in households.[3]

Furthermore, the continued use of coal for household energy consumption in developing countries conflicts with the effort to reduce greenhouse gas emissions.

Nevertheless, improved coal stoves have the potential to reduce emissions and increase combustion efficiencies. Especially in regions where coal is the dominant energy source, it could serve as a temporary solution in combination with improved stoves, until people can afford renewable or cleaner energy technologies.

Retrieved from "https://energypedia.info/index.php?title=Coal_Stoves&oldid=255063"
Categories:
Cookies help us deliver our services. By using our services, you agree to our use of cookies.