According to the World Health Organization (WHO) statistics, about 7 million people die every year due to contaminated ground water. 1.4 billion people (more than one fifth of the world population) are affected by water shortage and do not have an adequate supply of potable drinking water. People living in remote rural areas or in a suburban housing scheme in developing countries are especially affected by water shortage.[1]

In developing countries a drinking water supply of poor quality is the root of 80% of all illnesses. Through environmental pollution, population growth and an increasing water consumption per person, it is estimated that 50% of the world population will not have enough drinking water by the year 2050. Due to these facts, water purification and an adequate potable water supply are important topics which are discussed world-wide.[2]

On the large-scale, technologies for desalination and water disinfection are already installed in many different countries and are working reliably. For the application in rural areas of developing countries, however, the need for improvement still exists with regard to the energy supply and minimizing the maintenance requirements.[4]

Technologies to produce clean drinking water decentrally, from renewable energy sources and for a reasonable and commercially viable price are at hand. The cost per litre is very much depending on the degree and type of contamination though. Generally it can be said that arsenic contamination is the most expencive to deal with, gladly this type of contamination only occurs in very few countries. Salty/Brackish water is in the middle range when it comes to cost for purification. Sweetwater is the cheapest, as the removal of impurities or bacteria can be done quite easily. At last of course it is cheaper to use a surface water if that is available, as deep well pumps dont have to be run.

If sweet uncontaminated groundwater can be found only very little filtering is needed. Mostly Photovoltaic (PV) Pumping units for this purpose can be built locally and for low costs. 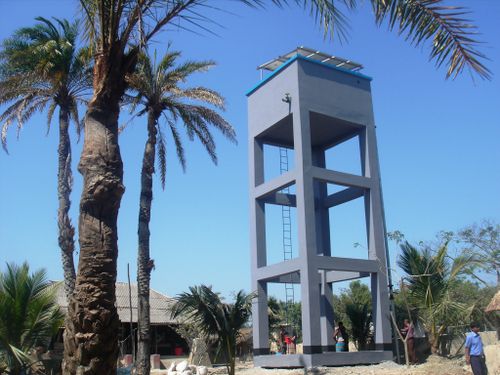 Stormproof Water Tank for a PV Pump in Bangladesh

Some suppliers offer high quality combined units for desalination and desinfection that can produce water for 3$-8$ from salt contaminated ground water.

Small, wall-mounted Systems that appear expensive at first can be brought to health centers, schools or even households that have access to a water source. They appear expensive, but run for example from a Solar Home System they can produce enough water to SELL in the neighbourhood for 3$-6$ per 1000L.

Severeal ideas and technologies are available to provide clean drinking water on household level, that do not use any electricity.

Retrieved from "https://energypedia.info/index.php?title=Decentralized_Drinking_Water_Supply&oldid=211293"
Categories:
Cookies help us deliver our services. By using our services, you agree to our use of cookies.