Taiwan is ongoing its energy transition. The transition will highlight a rapid growth of renewable electricity capacity and generation, but many other sectors such as transportation, building, and manufacture sectors will also be involved. The goal of this transition process is to ultimately meet Taiwan's own Intended National Determined Contribution published in 2015[1], which stated that compared to 2005, annual carbon emission should be reduced by 20% by 2030 and 50% by 2050. This is a reduction of about 53 Million tonnes of CO2 eq by 2030 and 133 Million tonnes by 2050.

Compared to other East Asia countries, this goal is quite ambitious. For example, South Korea only promised to tame its annual carbon emission to around 535 Million tonnes of CO2 eq by 2030, which is roughly the same level as 2005[2]. However, many of the policy goals in Taiwan still lack integration between governmental departments and also concrete measures before 2020[3].


As a neighbor of Japan and also located on the ring of fire, the public opposition of nuclear power in Taiwan grew significant after the Fukushima incident in 2011. The rally for a nuclear phaseout plan attracted some 200,000 people to go to the streets in 2013[5]. Therefore by 2015, all major political parties that participated the president election in the following year promised to phase-out all existing nuclear power plants during their campaign[6].


Nuclear phaseout remains a consensus among the major parties in the parliament after 2016. even when some nuclear proponents continue to link the issues of grid management failures and industrial air pollution to the lack of nuclear power throughout the years, their efforts remained limited.


Part of the reason why the policy remain highly consensus is because of the subtle geopolitical structure Taiwan currently has. The major opposition party, the KMT, have the most potential voters in the New Taipei City where strong anti-nuclear sentiments persist because of the 3 existing or planned nuclear power plants within[7]. Meanwhile smaller progressive parties in the oppostion such as New Power Party have voters with higher environmental awareness in general, and of the 5 legislators New Power Party have, one also came out from New Taipei City. Similar as in Germany, there exists almost no political niche in Taiwan for any political faction to reverse the policy, though recently nuclear advocates do manage do launch a referendum on abolishing articles regarding nuclear phase out in the electricity act[8]. However, it is still politically, legally, and in some cases technically impossible that nuclear power in Taiwan have a chance to exist after 2025.

Like Germany, the phasing out of nuclear will be faster than the speed of renewables expansion in the early stage. This will cause a stagnate of carbon emission in electricity production before 2020, but it will also avoid the chances of having too much inflexible power plants online that would limit the power generation of variable renewables.

The following sources of renewable energy are planned to increase capacity significantly by 2025: solar, offshore wind, biogas, onshore wind, and geothermal. Below is a chart of the goals of expansion, adapted and updated from Renewables are blooming; is the power system ready? A Prognosis on Residual Load Flexibility in Taiwan by 2025.

An important indicator of whether the expansion plans will go accordingly to the plan is the achieving rates of the mid-term goal by 2020. For example, solar should reach 6.5 GW by that year. Recent government projections and plans revealed that Taiwan is on track on these mid-term goals[9].

According to the International Energy Agency, there are four phases of integrating variable renewables onto the grid[13]. With about 1% of electricity generated by solar and wind, Taiwan is currently in the first phase, when grid integration is still not a major problem for renewable energy sources.

However, if 20GW of solar is installed as planned by 2025, the residual load curve will change drastically and Taiwan will enter phase two of VRE integration. By then, conventional power plants will have to vary their output accordingly. Also, the risk of congestion in transmission lines must be analyze beforehand, and weak spots in the power system must be strengthened in prior.

According to the network operators in Taiwan, most flexibility requirements by 2025 can be dealt without major retrofit of the system; the risk of congestion mainly lies in central Taiwan and therefore the transmission lines there will be strengthened[14].


Below is the power output curve a possible dispatch scheme may result to by summer 2025[15].The hard coal power plants might have to ramp more flexibly inthe future in order to adjust to the residual load variations, and this result to a reduction of coal use to around 26% in this scenario. The carbon emission intensity in this scenario was 0.396 kg CO2 eq/kWh, very close to the policy goal.

While wind power is weaker in summer, it will be more stronger in winter. Since the solar radiation in southern Taiwan remains strong even in winter, the first negative residaul load events would probably happen at noon in winter by around 2025 to 2030. By then Taiwan would have to start dealing with phase three problems described by IEA. Rough estimations suggest that the residual load in Taiwan by winter 2025 would be 7.5GW(weekday) or 1.5GW(weekend) at noon[15].As an isolated island, Taiwan will not be able to export electricity surplus during these events; this, however, doesn't imply that it is impossible for an island to reach and go beyond phase three. Many islands with inadaquate interconnections such as Ireland or Hawaii has already been dealing with challenges of this phase[16].

The Taiwanese government has pledged to ban the sell of combustion engine motorcycles by 2035 and cars by 2040[17]. This will be done by the electrification of the sector. Recent studies from energy policies experts and power system operators showed the impact of this electrification to electricity demand is very limited (less than 6% of current value), but if well implemented it will increase the flexibility of the power system as a whole (since parking electric vechicles can be a potential storage option)[18][19].

In particular, the electrification of motorcycles, the most common private transportation vehicle in Taiwan, might take up the leading role. Taiwanese E-Motor brands, such as Gogoro, has already become a global pioneer in the field. Also, it is planning to use its storage capacity (currently 560MW) to provide flexibility services to the grid in the future[20].

In the short term, diesel engine vehicles will be the very first to be regulated and banned[21]. In the local level, some cities are already banning these vehicles the right to access certain areas[22].

Energy efficiency will be highly promoted in the building sector. For example, governmental buildings are usually ill-performed regarding its energy usage intensity[23], and the governmental goal is to improve the efficiency of these buildings such that they perform in line with the official EUI standards[24]. New constructions will also face stricter energy efficiency requirements. Overall, the planned short term carbon emission reduction in this sector is greater than those in energy, transportation, and manufature sectors.

However, energy experts and building energy analysts criticized the lack of concrete implementation regarding this sector, and doubt if the goals can truly be achieved. Governmental faculties contribute only a small fraction of the existing buildings. Also, the life expectency of a building is about 40 years in Taiwan, so giving higher energy efficiency stardards to new constructions cannot help much in the short term. The success of decarbonization of this sector will rely heavily upon policies regarding existing residential and commercial buildings (for example a success implementation of Minimum Energy Performance Standard for those buildings), which experts considered insufficient.

The policies in agriculture sector include a boost of biogas (50% of the stock will be used by 2020 and 75% by 2030)[24], an increase of organic farmiing, and a sustainable forestry system that is self resilience and does not rely too much in import woods.

Apart from the building sector, the environment sector will contribute to most of the carbon emission reduction before 2020. It is mainly around the establishment of a circular economy and waste reduction[24].

The government promised to reveal the total amount of public subsidy towards fossil fuel industries. It also promised to reveal the public investment portfolio in high carbon emission industries. These are essential steps that should eventually lead to a divestment movement, as seen in Ireland[25] and New York[26]. A nationalwide divestment movement might become more possible when the ongoing divestment movement at the campus of National Taiwan University[27] gains concrete results and therefore demonstrates the feasibility of such strategy to others on the island.

According to a poll in 2015, about two thirds of the surveyed population in Taiwan agreed with the current policy to replace coal with gas, and more than three fourths of them also supported the view that alternative energy sources besides conventional power plants can reduce total carbon emissions. 85.1% of them agreed to pay a higher electricity retailer price to boost the growth of renewable sources. Regarding divestment issues, although the polls on fossil fuel subsidies was more polarized, more than two thirds of the people agreed that the government should levy higher taxes for environmental purposes, and 73.8% of them also believed that enterprises were not taking full social responsibilities[28].

A more recent poll in March 2017 showed that 92.1% of the surveyed population supported the policy to boost renewable energy[29].

Besides the high support for energy transition, many environmental organizations have long demand a more transparent and participatory mechanism to discuss the policy goal and implementations of the transtion process. This led to results such as the participatory process of writing the Energy Transition Whitepaper[30]. In the local level, some municipal governments have already shown great interests in cooperating with grass root organization in matters regarding energy efficiency and air pollution.

According to the state-owned utility Taipower's own plan, by 2028 they will be operating some 25GW of gas power plants[31]. This does not include the nine IPP owned by private companies, which would be about 9GW if all of them are turned to gas power plants as local governments often require recently. Although these plans are in line with the mid term transition plans to replace coal with gas in the electricity sector, in the long run electricity generation from gas in Taiwan will have to eventually decrease around 2030[32]. The risk of over-capacity beyond 2025 is putting these power plants in the risks of becoming stranded carbon assets.

Current reformations of the market are just to set the proper environment for renewables to grow. The more controversial parts of the reformation were not discussed and remain uncertain to this date. For example, a main public debate is that whether or not the network utility Taipower should give up its conventional power fleet, and if so, should the new owner(s) be state-owned, municipal, or private owned[34].

Although public participation in the transition process was stressed by environmental and local groups, the legislation structure currently is still far from friendly for community or individually owned projects. This caused tensions between local communities and renewable project companies, who get the main economical profits of the renewable expansions.

The current legal-binding renewable expansion targets only reach 2025, and carbon emission targets 2030. After that, it is still uncertain how Taiwan will evolve to a deeply-decarbonized society by 2050. 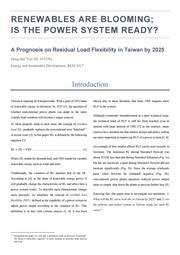