During COP23, Johanna, Robert, and Lisa from the energypedia team participated in various side-events focusing on energy access within the climate dialogue. In this article, the energypedia team members reflect on these events and summarize some of the key insights and points of discussion.

Energypedia officially launched the new climate change portal during the Bonn climate negotiations! This portal provides an overview of all climate change related articles and publications on energypedia. Have a look and don’t hesitate to contribute your information to the portal! 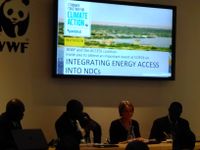 The ACCESS coalition and the WWFdiscussed about how African parties are revising their Nationally Determined Contributions (NDCs) in the ratification process of the Paris Agreement. In the first version of NDCs, energy access was not included at all but now after many revisions, energy access is finally included but only at household level. There is still a lot to do: e.g. clean cooking is still absent in almost all NDCs!

Energy sectors tend to be top-down and the main focus is on infrastructure and grid densification. There is a need to include Civil Society Organizations into the process of delivering energy access into rural areas as they know how to tailor energy services to meet the needs of the target communities. More investment in energy for small businesses in Africa is vital for development – but only 15 African countries have energy access targets in their national plans so far.

SEforALL organised a great panel of women to discuss gender and the new People-Centered Accelerator. The new accelerator aims to enhance clean energy access for the poorest people, who will not be reached by business as usual approaches; by unlocking finance from private and public sources, strengthening collaboration and connections between stakeholders in the energy, gender and social justice sectors and increasing women's full participation in sustainable energy solutions. "It's not kilowatt, it's people we are trying to reach! “, Ingrid Hoven from German Federal Ministry for Economic Cooperation and Development (BMZ) emphasized. She further stressed the need for more sincere monitoring systems in many countries. Rachel Kyte for SEforALL, called to direct the capital to the 1 billion people without access to energy and to unleash the creativity of women. Ragna Árnadóttier from Iceland pointed out that since most energy companies are male dominated and conservative, women talent is lost. Ajaita Shah from FrontierMarkets emphasized that financial innovation for rural households and women entrepreneurs are essential. Sheila Oparaocha of Energia explained that many partners are successful – after meetings at night in the villages with only mobile phone lighting! Fleur Newman, UNFCCC, stressed that “collective effort, collaboration and partnerships are key”! Throughout the COP, SEforALL supports all energy related dialogues, focusing on how to achieve SDG7 of affordable, reliable, sustainable and modern energy for all within the context of the Paris Climate Agreement. Being empowered economically, women will play a big role! 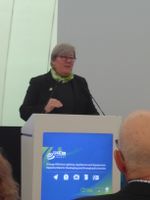 Rachel Kyte also spoke at this event and stressed that the critical path for SDG7 needs to include policy, technology and finance. Also energy efficiency might play an even greater role than ever. Since people are investing more in efficient appliances, the spending power will grow in the next few years, says Kyte. No country optimises its efficiency yet. This means, that the entry points are different for all countries. Therefore, the SEforAll's work on efficiency will grow.

Bertrand Picard pointed out that “things go fast in the solutions, but not in the implementation.” Efficient solutions are not known enough, we need to pull more innovation to get those to the market. He pledged for more efficiency impulses like his ambitious goal for a solar airplane!

The panel offered solutions and experiences from Chile and West-Africa: Investments into energy efficiency (EE) “already paid for itself within the first year”. However, the low-hanging fruits of EE are mostly “yet untouched fruits”. Building alliances and bringing all stakeholders involved (including the private sector) together is key, according to David Rogers form the Global Environment Facility. Furthermore, he said, the finance Ministry should be more interested in the topic.

WISION: From Paris to Action at Local Level in the Global South – What Role Can Local Energy Practitioners and Existing Knowledge Networks Play?

A fruitful panel discussion organized by WISION explored the role of energy practitioner networks in connecting the Sustainable Development Goals with the Paris Agreement. It became clear from the discussions that many local energy practitioners are not aware of the climate change agenda and the role they could play as change agents. Climate actions implemented on higher levels are perceived to have no connection with local levels, Mariela Pino from RedBioLAC in Latin America explained. However, people on the ground need to demonstrate that the energy system can be switched, as Wolfgang Obergassel from Wuppertal Institute pointed out: “Governments don’t lead, they rather follow.”  Jem Porcaro from UN Foundation emphasized the role of networks to speed up transition. He also stressed the point that even if energy for all is achieved, the fraction it has in climate change is neglectable compared to other sectors.

Nonetheless, in the further discussion it became clear that due to fundraising considerations also local energy practitioners should be aware of the connections between sustainable energy access and climate change mitigation and adaptation. Local and regional networks could play an important role in spreading the message.

Retrieved from "https://energypedia.info/index.php?title=Energypedia_at_COP23,_Bonn_2017&oldid=237608"
Categories:
Hidden category:
Cookies help us deliver our services. By using our services, you agree to our use of cookies.