Aquaculture is a large industry in many low income countries (LICs); fish farms account for about 5 percent of the GDP of Bangladesh. Improving the quality of aquaculture pond water has the potential to increase fish yields, raise incomes, and improve food security. In large aquaculture facilities, aeration has been shown to improve water quality and increase yields. However, aeration equipment is costly and requires electrical power inputs which can limit its use in LICs. Dissolved oxygen (DO) that is used by the fish is provided by photosynthesis, which is related to sunlight and takes place during daylight hours. The oxygen is produced at the pond surface and much oxygen is lost to the atmosphere. By circulating the water, more oxygen can be introduced.[1]

The proposed solution is a new aeration method that does not require electricity, has few maintenance requirements with no moving parts, and is inexpensive to fabricate and deploy in LICs. The system uses heat that is captured through a solar thermal absorber plate and transferred to the bottom of the pond to heat the bottom water. The heated water will rise and mix the pond, spreading oxygen-rich water from the top through the entire depth of the pond. This increases the DO reservoir and can result in improved water quality and higher pond yields.[1]

The system will allow for increased density of fish stock, 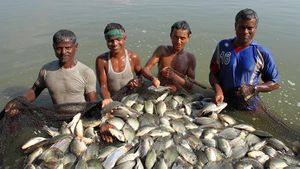 yields of fish, as well as larger fish that have a higher market value and demand. Fish feed is also used more efficiently, which reduces feed and operation costs. The solution is an alternative to power-hungry aeration systems that consume a significant amount of energy and capital. For farmers not using aeration, the technology will provide all of the benefits described above. For farmers using aeration, replacing or supplementing existing devices can greatly decrease energy consumption for aquaculture.[1]

Using the Powering Agriculture funding, refinement of the device design has continued in order to use the solar thermal energy more efficiently in the aeration process. The University of Toronto has built and deployed 17 solar aeration devices at 10 fish farms in Bangladesh. Each installation includes a control pond, along with the experimental pond. Additional installations are planned for late 2017/early 2018 for an additional 33 devices.

The project is gathering data from the installed devices and three prototypes of new versions of the solar aeration device are planned for manufacturing and installation; the test results will be compared with the performance of previous versions.

To assess the technology, surveys have been conducted for all farmers who will participate in the study and will provide essential data on fish production, the impact of the device, gender-based challenges with the technology, fish farming practices, household conditions (size, income, education), and their interest in the technology. Furthermore, the farmers have received detailed training for using devices, and working principle of the device in the ponds. [1]

Retrieved from "https://energypedia.info/index.php?title=Field_Evaluation_of_a_Passive_Aeration_System_for_Aquaculture&oldid=253401"
Category:
Cookies help us deliver our services. By using our services, you agree to our use of cookies.