►Financing and Funding Portal on enerypedia

The Importance of Finance in Sustainable Urban Transport

Why is financing so important?

The rapid increase in motorized traffic increases congestion, air pollution and accidents, whose costs fall back to the city and its citizens in terms of lower productivity, fuel costs and health/hospitalization costs. In cities across the world, the inadequate and inappropriate urban transport financial arrangements are largely responsible for the worsening urban transport situation.[1]

Who is involved in financing urban transport?

The major actors include[1]:

How can urban transport be financed in a sustainable way?

At a very crude level, financing sustainability is met when revenues are balanced with expenditures, in other words when total intake/income is equal to or exceeds spending.[1]


Maintaining this balance needs to be considered at all levels of decision making, namely[1]:

The funding of infrastructure often becomes financially unsustainable when shortfalls in revenue (e.g. through the under-pricing of infrastructure use and lack of stable income source) is combined with excess in expenditure (e.g. through poorly controlled costs, political changes and/or corruption). Investments require up-front funding but it is essential that over the longer term the revenue covers the financing, operating and maintenance costs.[1]


Public transport services often become financially unsustainable due to a combination of poorly structured subsidies, improper fare controls, inefficient operations and poor financial management. Problems with funding are often interlinked and represent/share a larger, underlying problem. This provides the case for a wider and deeper analysis of the current problems, which may involve consultations and joint working with various stakeholders, including citizens, other government bodies and the private sector. The box below provides a number of questions to help assess the financial sustainability of urban transport.[1] 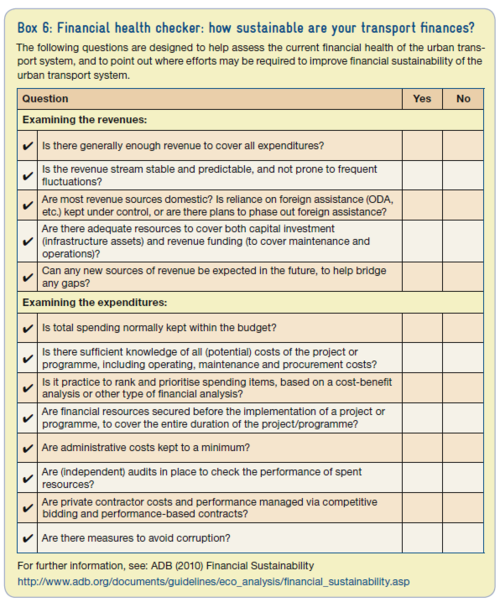 What needs to be financed?

The financing of urban transport requires at a very crude level the coverage of two main aspects, namely[1]:

These elements must all be supported, in order to enable a sustainable urban transport system and maximize its efficiency. Addressing the current challenges require much more than investing in additional transport infrastructure projects, but rather the re-examination of urban transport as a whole system, and building a financing framework to maximise its potential.[1]

What are the barriers that need to be acknowledged?

The issue of transport finance does not exist in isolation from a wider set of issues that determine the ability for cities to meet the aforementioned goals of developing a sustainable transport system. In reality, the effective financing of a sustainable urban transport system is undermined by various other factors, which need to be fully understood and appropriately managed.[1]

Approaches Towards a Sustainable System

Understanding and Managing the Financial Requirements for Sustainable Transport

The first step towards reaching the aforementioned goals is to understand the financing needs.


The estimation of such requirements must be embedded within[1]:

Accurate and consistent accounting for transport expenditures is very important. This provides the basis for[1]:

Once the areas which are inadequately or improperly funded are identified, and incentives created to minimise unnecessary expenditures, an appropriate set of financing instruments must be selected to plug the gap and improve support for sustainable transport.

The majority of financial instruments that are available at local and national levels are those which have a history of use within the transport sector, whereas those at the international level include innovative instruments that have lately been conceived with the specific intention of promoting environmental objectives, particularly climate change mitigation.[1]

Parking charges are often used in place of direct road user charges, and their ability to be differentiated by time and place makes them an appropriate demand management measure that can be alter to internalise some of the negative externalities generated by the mode. Not all cities charge for the use of parking facilities however, and parking is often subsidised. Even where charges are applied there is a tendency for them to be undercharged, which leads to an efficient allocation of space in urban areas. Parking charges can vary based on geographical area, day, time, duration of stay and emissions generated from each vehicle. In association with other measures increasing parking charges in city centres can, for example, reduce congestion and promote public transport use. Furthermore, on-street charges should if possible be higher than off-street charges as this will act as an incentive for people to park off-street, rather than look for a cheaper (as well more convenient) on-street space. As a rule of thumb parking fees per hour should be higher than single bus fare in order to encourage the use of public transport.

Road pricing involves directly charging road users within a defined area for their use of road space.

There are many forms of road pricing, including:

Charges can subsequently vary based upon geographical area, vehicle type, day, time, and (when using more advanced systems) upon levels of congestion. This flexibility is the major strength of road pricing, and provides scope to best implement the user-pays principle. This is largely owing to the fact that car owner-ship in developing countries is predominantly by those who earn relatively high-incomes, and who are likely to attach the highest value to reduced travel time and increased reliability. Revenues of charges can be reinvested in wider urban transport modes, such as public transport, to improve options for modal shift. It can also be used to help service capital payments and to maintain the infrastructure, so that benefits of the charge are immediately perceived by the users.

Public transport subsidies must be coupled with measures and regulation to ensure that they are used effectively and not wasted. This is owing to the potential for subsidies to be misused or poorly managed. A preferable alternative to subsidising services is to capitalise upon different user preferences by supplying different products to different segments of the market. Subsidies can also be reduced through increasing the role of the private sector, which often increases the efficiency of operation. These processes can be used to introduce competition and lead to the lowering of fares without the need for subsidy. However, measures such as performance based contracts must be in place to mitigate the disadvantages of private sector involvement.

Fuel taxes are popular mechanism to raise revenue, either for the general account or for transport-specific usage. It is a relatively simple and reliable way of charging, and their implementation and enforcement are both less problematic than alternative revenue raising approaches. Fuel taxes can be used as a stable source of revenue for the maintenance of, and in some cases such as Japan the construction of road infrastructure. Fuel tax can also be considered a way to implement the user-pays principle, as fuel consumption can generally be regarded as a good indication of the level use of road infrastructure. The main weakness of the fuel tax is that is cannot differentiate charges adequately to reflect the nature in which the vehicle is used. However, unlike more sophisticated instruments such as road pricing scheme, they are relatively easy to administer and hard to avoid. It is also prone to (indirect) subsidies, reflecting political pressure to keep fuel prices low. Revenues from fuel tax tend to accrue at a national rather than local level, thereby making it difficult for the instrument to be co-ordinated with urban strategies.

Vehicle taxation, which is also known as road taxation, is a tax on car ownership that is typically payable on an annual basis, although it is also levied on the acquisition of vehicles. It follows the principle of redistribution, meaning that more affluent groups, who are able to purchase their own vehicles, are taxed and therefore have to contribute more to infrastructure maintenance and extension than the poor. Vehicle taxation is similar to fuel tax in that it directly falls upon those who use the infrastructure and that the revenues can be used to support. Vehicle taxation is known to be generally the second largest source of revenue from transport, following fuel taxes. It can therefore be used to fund the maintenance of urban roads, or other more sustainable forms of urban transport provision, such as public transport. Vehicle tax can be varied depending upon engine size or carbon emissions. Thus, vehicle tax can be used to encourage car owners to purchase vehicles with a better environmental performance.

National and International Loans and Grants

Loans, in particular those provided by national or international public bodies, may allow the local authority to borrow at significantly lower interest compared to raising funding on the private market. Borrowing through such concessional loans, with a few percentage differences in the interest rate, may amount to millions of dollars of savings for the local authority over a course of the project.

In many developing cities, the borrowing ability for urban transport is often restricted by the availability of future revenue to support the borrowing, as well as the legal framework, which can set a limit on the amount that can be borrowed without the consent of central government. The key purpose of such limits is to ensure that borrowing is affordable, although in smaller cities his may be owing to the fact that national government needs to borrow on their behalf. Grants and loans are also provided by foreign sources, e.g. in the form of official development aid (ODA). These are provided by governments of industrialised countries, either bilaterally, or through multilateral institutions such as the World Bank, providing in total billions of dollars worth of transport investments every year. However, most of the funding is channeled into road building, which does not always support the goal of sustainable urban transport.

The various funding instruments identified in the previous sections can be combined to ensure a good coverage of the various aspects of sustainable transport, whilst achieving a high level of financial sustainability.

The following points are crucial when combining the individual instruments:

Retrieved from "https://energypedia.info/index.php?title=Financing_Sustainable_Urban_Transport&oldid=95095"
Categories:
Cookies help us deliver our services. By using our services, you agree to our use of cookies.