As of 2007, Kenya spent over 40% of its foreign exchange earnings on importing crude oil and other petroleum products. This expense increases every year. The leading marketing company in Kenya is the Shell / BP Alliance with over 30% of the market share. The other companies involved are, Oil libya, Caltex, Total, Engen, Kobil / Kenya Oil Company (KENOL) and the state-owned National Oil Corporation of Kenya (NOCK).

The figure below depicts the trends in fossil fuel consumption in Kenya[1]: 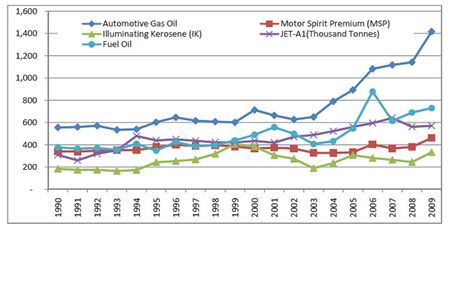 
As of 2007, Kenya had one refinery, the Mombassa refinery, with a nameplate capacity of 90,000 barrels per day. Since its commission the refinery has not operated at full capacity. There are storage facilities throughout the country and these are adequate for both crude and finished products. Distribution infrastructure consists of road, rail and pipeline systems. Kenya Pipeline Company (KPC) manages and owns the existing Mombassa-Nairobi pipeline. There is a second pipeline that extends from Eldoret to Kisumu in the west of the country.

The National Oil Company of Kenya (NOCK) has made 17 blocks available for petroleum rights negotiations. There are 4 prospective petroleum basins in Kenya, the Anza Graben, the Mandera Basin, and the Lamu Embayment. The blocks are mainly onshore with the exception of the Southern Lamu Embayment, which offers both onshore and offshore blocks. About 30 exploration wells have been drilled to date and although none has encountered a commercial discovery, a number of drill stem tests have recovered or tested gas. However, if Kenya found oil, it could take 4-7 years before the country could benefit from the possible insulation effect from a surge in global oil prices.

As of 2007, Kenya has no system for increasing the volume of oil imports or storing them in the wake of an oil supply disaster. However, the Energy Act, enacted on July 1st 2007, requires the Ministry of Energy to institute modalities for creating strategic stocks. The increasing dependence on imported oil makes the country economically vulnerable to energy terrorism.

In 2012, the Ministry of Energy announced that vast oil resources had been discovered in Turkana region of North Western Kenya. A company, Tullow Oil is currently evaluating the economic feasibility of the site.

The Government is expected to construct the liquefied petroleum gas (LPG) handling facility in Mombasa to boost LPG supply to the country and the Great Lakes region and to commence a public private partnership to construct an inland depot and LPG distribution and filling depots in Athi river, Eldoret, Nakuru, Kisumu and Sagana to be completed by June 2010.

This will make the product more available to the all corners of the country. Concurrently, the industry-government efforts to harmonize cylinder sizes and also to standardize regulators and valves are on course.

The Ministry of Energy has identified two areas with possible commercially exploitable quantities of coal. These are the Mui basin of Kitui and Mwingi Districts and Taru basin of Kwale and Kilifi Districts. As of 2007, 10 wells have been drilled in Mui basin with encouraging results indicating possible existence of commercial quantities of coal. The samples from this basin compare very well with those (sub-bituminous) being used for power generation in South Africa.

In view of these results, the Ministry is fast-tracking the coal evaluation and reserve estimation process.

Retrieved from "https://energypedia.info/index.php?title=Fossil_Fuel_Resources_in_Kenya&oldid=99883"
Categories:
Cookies help us deliver our services. By using our services, you agree to our use of cookies.