Webinar on Solar Powered Irrigation Systems for Small-scale Farmers in Mozambique – Status and Opportunity for the Sector (Register)
Wednesday, Dec 15, 9:00-10:45 am CET

"Pricing policy: Fuel prices are uniform, controlled by government, and frozen for years at a time. Since Jan 2009, vehicles with foreign licence plates have been charged international prices, set every quarter. On the domestic market, the price of oil is US$27/bbl. Concerned about declining oil production, government issued Supreme Decree 1202 in Mar 2012, providing a tax credit of US$30/bbl to foreign companies in addition to US$10 in cash they were receiving. As late as Dec 24, 2010, government was reportedly denying any intention to reform subsidies. However, just two days later, as part of a broader subsidy reform, government increased diesel price by 83% and gasoline by 73%, the largest since 1991 when prices were raised by 35%. Government was also to raise the fee paid to oil producers from US$27 to US$59 a barrel.

Information: Government posts current fuel prices on its Web site. In Feb 2011, government created a new ministry of communications, 8 years after such a ministry had been abolished." 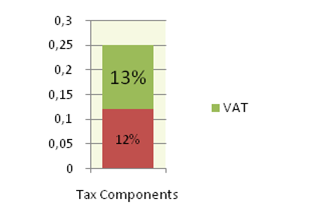 Source: example to estimate %-values for each component

This is a living document. If you have any comments or suggestions, please feel free to contact us: Armin.Wagner@giz.de
Retrieved from "https://energypedia.info/index.php?title=Fuel_Prices_Bolivia&oldid=81073"
Categories:
Cookies help us deliver our services. By using our services, you agree to our use of cookies.