"Pricing policy: Various stabilization mechanisms have been in effect since 1991 following the Gulf War, when government established FEPP (Fondo de Estabilización de Precios del Petróleo, Stabilization Fund for Petroleum Prices). In September 2005, government established a new temporary price stabilization fund, FEPCO (Fondo de Estabililización de Precios de Combustibles Derivados de Petróleo, Petroleum Product Price Stabilization Fund), intending to retire it by June 2006. After FEPCO became effective, FEPP was restricted to LPG and fuel oil. Subsequent world price movements prompted government to keep the fund operating until 2010. A law published in February 2011 replaced FEPCO with SIPCO (Sistema de Protección al Contribuyente ante las Variaciones en los Precios Internacionales de los Combustibles, System of Protection against Variations in International Fuel Prices). SIPCO covers small and medium enterprises and dampens the impact of price volatility of four automotive fuels—gasoline, diesel, automotive LPG, and CNG—through a variable component that is subtracted from or added to the base component of the specific fuel tax, determined by the price difference between import parity and the upper or lower band of reference prices. Adjustments are made if world oil prices differ from the reference price by more than a certain percentage point, which was initially 12.5% but changed to 10% in Sep 2012, when the duration of the tax adjustments was also changed to 4–52 weeks. The reference price is established by Ministry of Economy, which considers both current and future prices (future prices are given a weight ranging from 0 to 50%) and adjusts the price band every four weeks. SIPCP does not cover large diesel consumers such as power plants and mining companies. Monthly average retail prices of diesel in the Metropolitan Region and FOB benchmark prices relevant to Chile since 2007 are shown below. Except in 2008, the degree of price smoothing has been small, if any.

Protests: Taxis and mini-buses went on strike in Oct 2011, protesting fuel price hikes and asking to be included in transport policy, including subsidies.

Information: The National Energy Commission (Comisión Nacional de Energía, CNE) posts monthly average prices of all fuels by region, dating back to Jan 1994. A resolution issued in Jan 2012 require that prices of gasoline, diesel, kerosene, CNG, and automotive LPG at each filling station be published on CNE’s Web site, and they are ranked in order of increasing or decreasing price depending on the viewer’s preference. Resolution No. 60 issued in Jan 2012 requires that each filling station enter price information in a national online price database, which is published on CNE’s Web site, and also made available on iPhone, BlackBerry, and Android. The Web site displays minimum and maximum prices, the address of each filling station, prices, and the date and time of the last price change. Retailers are required to enter new prices no earlier than 15 minutes before price changes are implemented." 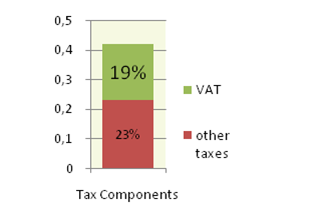 This is a living document. If you have any comments or suggestions, please feel free to contact us: Armin.Wagner@giz.de
Retrieved from "https://energypedia.info/index.php?title=Fuel_Prices_Chile&oldid=81063"
Categories:
Cookies help us deliver our services. By using our services, you agree to our use of cookies.