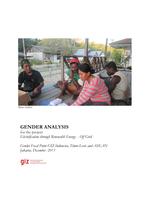 ender Analysis for the project Electrification through Renewable Energy - Off Grid.pdf

According to a gender study conducted by GIZ (2015) regarding women’s involvement in management of PV mini-grids, it was revealed that only 6% of the rural electricity management team members were female (Reference: Gender Analysis Indonesia, 2015). Such team is responsible to operate, maintain and manage the mini-grid system of which there is only a few manager position hold by women. Instead, the most common roles for women are as accountant and secretary.

We also observed that women very rarely take part throughout the development process of PV mini-grid system as well as the utilisation of the generated electricity. It is really unfortunate because women have a fundamental role in household and the family livelihood. Moreover, the Law No. 6/2014 on “Village” guarantees the participation of women in village development. There are two chapters that regulate the principles of democracy and gender equality of roles between women and men during the village development and management process.

The spirit to promote women's participation in every aspects of rural development needs to be supported. Therefore, a series of efforts to increase the number of women's participation in PV mini-grid management becomes very crucial. In earlier time, EnDev Indonesia subtly took initiative to encourage women’s role in a management team through facilitation and consultation. As gender issue recently has become more prevalent, EnDev Indonesia attempts to introduce the basic concept of gender equality using a more enticing and engaging way.

Posters, with illustration and pantun, were chosen as a medium to communicate gender and gender equality concept as they are proven as an effective communication tool with villagers. Pantun, a traditional form of expression usually consists of rhyming lines, are widely known in the country. Such an eye catching poster can draw people’s attention into specific issues and convey an idea in a quick and efficacious way. Posters have the ability to stay in the minds of viewers and can be a great tool for raising public awareness.

We target rural communities with PV mini-grid in at least 50 villages to be disseminated with the posters this year. Through these posters we aim to increase the understanding on the importance of balancing the participation of women and men in the PV mini-grid management and to gain recognition of women’s role in rural electrification programme. We expect that such gender equality campaign, may increase the number of women active in the PV mini-grid management as well as in the utilisation of electricity in a more productive manner.

EnDev Indonesia is a project jointly implemented by the Indonesian Directorate General of New Renewable Energy and Energy Conservation and GIZ with the main purpose to support the rural electrification initiative mainly through micro hydro power and solar power technologies. The project is part of the global partnership Energising Development, currently financed and governed by the governments of the Netherlands, Germany, Norway, Australia, the United Kingdom, Switzerland and Sweden.

Retrieved from "https://energypedia.info/index.php?title=Gender_Poster_in_Indonesia&oldid=218569"
Categories:
Cookies help us deliver our services. By using our services, you agree to our use of cookies.