India is the world’s top milk producing nation and has the largest number of dairy cattle in the world - in 2014, India’s dairy cows (including indigenous buffalos) accounted for just over 30% of the world’s total number of cattle in 2017 . The dairy sector provides an important secondary source of income for millions of rural families and is a crucial source of employment and opportunity for income generation, particularly for marginal and women farmers. Small, marginal farmers and landless labourers produce most of India’s milk; in fact, 70% of India’s milk suppliers are smallholder farmers with no more than three female cattle.[1]


Farmers sell their milk into formal, organised value chains (cooperatives, private domestic processors or multinational companies) and to informal buyers. This article is based on a project which focused on the formal sector and explored the potential for energy savings at the level of processing plants, as well as chilling during procurement and at retail outlets.[2]

In India, energy costs comprise about 30% of the overall production cost of dairy products[3]. The dairy industry presents good potential to reduce energy consumption and thereby production cost. Significant energy efficiency improvements could be made, for example, by replacing outdated, energy-inefficient technology and by raising awareness of ways to save energy through Operations and Maintenance (O&M) adaption. 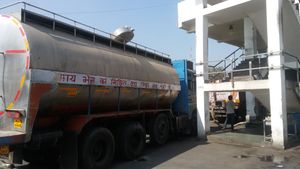 The general demand for energy in the dairy value chains can be ranked as follows[4]:

A refrigerant is a substance used in a heat cycle that normally includes (for enhanced efficiency) a reversible phase transition from a liquid phase to a gas phase. Traditionally, fluorocarbons, especially chlorofluorocarbons, were used as refrigerants, but they are being phased out due to concerns over their contribution to ozone depletion. Many conventional refrigerant compounds have significant ozone depletion effects and large global warming potential, and are therefore the focus of worldwide regulatory scrutiny such as the requirements of the Montreal Protocol[5].


In the Indian dairy industry, natural refrigerants, especially ammonia, are often used at the level of processing plants, while conventional refrigerants are most likely to be found at the initial aggregation stage which is the first point of milk chilling (bulk milk chillers and milk chilling centres) as well as at the retail level. The hydrochlorofluorocarbon R22 is to be phased out in India by 2030 and is found often at bulk milk chillers and retailers. For this reason, interventions in India’s dairy value chain to replace ozone-depleting substances should initially target bulk milk chillers and milk chilling centres as well as shops and dairy retail outlets. Many dairies operate so-called “milk kiosks”, which are standardised milk selling units.  A milk processing plant might run and supply up to 300 of such units in urban areas.[7] These kiosks would be a good entry point to pilot efficient and environmentally sound cooling systems.

As part of this project, two dairies agreed to allow energy audits to be conducted in their processing plants. Both plants were of medium size, with a daily milk turnover of between 300,000 and 500,000 litres (L). One of the plants is owned by a cooperative (co-op) and the other is owned by a private sector dairy. It was expected that auditing one modern plant (built in 2016) and one older plant (built in 1982), would provide widely varying results. However, while the savings potential for the older, co-op-run plant was much larger (36% electric power and 13% fuel  saving potential) even the modern, privately owned plant showed room to improve its energy efficiency (12% electric power saving potential)[8]. The audits demonstrated that for the proposed measures, payback periods are short (often under 12 months) and upfront investment required is moderate (often less than 10,000 to 20,000 EUR)[9]. An example of such a proposed measure is the replacement of outdated or wrongly dimensioned pumps throughout the dairy processing systems for one of the audited dairies (co-op dairy). Those replacements would create an initial investment of about 7800 euros and result in energy bill savings that would cover the expenses within five months. Interestingly, the highest-impact energy conservation measure for both plants was the replacement of pumps and chillers. 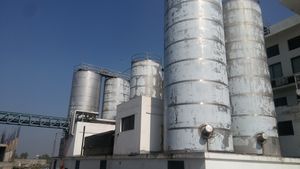 When those findings were presented at a stakeholder workshop in Delhi in April 2018, it was agreed that the proposed interventions would be appropriate in the majority of dairy plants of similar sizes. Of particular interest to dairy stakeholders was the potential for zero- to low-cost interventions and behavioural changes, which could be implemented by an individual plant manager, before a larger decision about investment in hardware has to be taken by a dairy company.

In addition to looking at opportunities for energy savings and increasing efficiency, the auditors also investigated the refrigerants used at plant level and throughout the dairy cold chain. Both plants included in this project used ammonia for on-site chilling at processing plants. However, Bulk Milk Chillers (BMCs) and Milk Collection Centres (MCCs), where milk is initially chilled after collection from villages, often rely on harmful conventional refrigerants. Such conventional refrigerants were also used by retail units run by the dairies (milk kiosks), which rely on ordinary fridges. Interventions could be targeting these units to improve energy efficiency and replace environmentally harmful refrigerants.

While the audits delivered some interesting data, more audits are required to understand the needs and potential for energy saving across the entire dairy value chain. During the stakeholder engagement workshop it also emerged that energy audits in their current form are not particularly useful for dairy plant managers and their boards; regular audit reports are usually lengthy documents with many technical details and typical engineering language which are difficult to process for laypeople.   The development of a more sector specific audit template focusing on the most likely area of interest is therefore an important step towards the implementation of energy conservation measures.  Those areas of interest for dairy managers include recommendations on O&M adaptation and basic financial parameters for the required investments and payback periods in a more easily digestible format.[10] This could mean a visually appealing presentation, highlighting and grouping the proposed measures according to such key parameters (lowest investment, shortest payback period, greatest saving potential…).

The Indian dairy sector overall tends to take a conservative stance toward new and innovative technology and is reluctant to make the required investments, with the co-op sector in India particularly hesitant to implement changes. It can take a long time to develop the necessary relationships between private sector energy companies and stakeholders from milk unions and dairy federations, yet the large potential for climate change mitigation activities in the co-op sector in India should not be overlooked. Individual actors from both the private and co-op sectors are keen to tap into the opportunities for cost savings, increased productivity and environmental sustainability that modern energy technology promises, but they need support in the form of training and capacity building, access to finance and compelling success stories to present to their directors.

Profit margins are thin in the dairy sector and it is likely that a supportive financial environment will have to be created to encourage investment into energy conservation measures and the wider rollout of clean energy and energy efficiency in the sector. In the initial assessment, it emerged that the ESCO [11] model is not yet widely known to dairy stakeholders. ESCOs assess buildings and industrial systems and install improvements without cost to the client; payback of this investment and profit are realized through savings of the client’s energy bills. After coverage of the ESCO’s investment, the implemented improvements belong to the client who benefits from future energy savings directly.  This model could be recommended to implement recommended changes in the dairy industry.

The project “Greening India’s Dairy Value Chain” is a follow-up project to “Business Cases for Clean Energy Cooling Solutions in Dairy Value Chains”, funded by the Federal Ministry for Economic Cooperation and Development commissioned GIZ project Powering Agriculture and implemented by REEEP. The two projects ran from 1 December 2016 until 31 May 2018. The second project carried out a more detailed analysis of potential clean energy and energy efficiency interventions in India’s dairy sector, which included additional research on the dairy processing industry, refrigerants, and the policy and regulatory environment. Two sample energy audits were conducted to understand the energy savings potentials in dairy processing plants. The results of these were presented in a stakeholder workshop, where the applicability of the recommendations to the wider sector was discussed. See this article for more information.

Retrieved from "https://energypedia.info/index.php?title=Greening_the_Indian_Dairy_Value_Chain&oldid=298643"
Categories:
Cookies help us deliver our services. By using our services, you agree to our use of cookies.