Kenya’s drainage system consists of five major basins, Lake Victoria, Rift Valley, Athi and coastal area, Tana River, Ewaso-Nyiro and North-Eastern. These basins contain the bulk of the country’s inland hydro resources. The total hydropower technical resource is estimated to be about 6 GW, with half this potential being attributed to small rivers. The hydro resources lie in areas of high domestic energy demand.

The hydroelectric power potential of economic significance available for large scale power development is estimated to be 1,500 MW of which 1,310 MW is for projects of 30 MW or bigger. Of this, 434 MW has been identified in the Lake Victoria basin, 264 MW in the Rift Valley basin 109 MW on Athi River basin, 604 MW on Tana River basin and 146 MW on Ewaso Ngiro North River basin. On the Tana River and Ewaso Nyiro basins, a further 420 MW have also been identified. However, the projected generation costs for these currently exclude them from the least cost power development plan (LCPDP)[1].

Small, mini and micro hydro systems (with capacities of less than 10 MW each) are estimated at 3,000 MW nationwide. In 1997, Kenya’s Electric Power Act allowed independent power producers to supply electricity to the grid, but small decentralized schemes, such as micro hydropower, were not fully addressed. Micro hydropower is not new to Kenya; prior to the 1960s micro hydro was used to power grain mills. However, these out-dated systems were quickly outpaced by the diesel engine for milling grain[2]. Mini and micro hydropower in Kenya was among the earliest recognized sources of electricity in the early 1900s. Approximately 55 river sites have been identified as attractive commercial possibilities, with maximum mean capacities in the range of 50 kW to 700 kW. These are useful for off-grid or isolated grid rural electrification. Unlike large-scale hydro-projects, small-scale hydro is more environmentally benign and suitable in remote off grid areas.

Today, improved technology makes micro hydropower economically viable in many situations, but the country lacks the infrastructure for production and installation of micro hydro systems, or for repair of systems once they are installed. In addition, there are no standards or other policies to encourage and enable local communities to take advantage of this renewable and environmentally benign source of power[2].

Installed grid connected small-scale hydro-electric projects contribute about 6.3 MW. These include Gogo and Selby falls in the Lake Victoria basin, and Ndura, MESCO, and Sagana Falls in the Tana River catchment, all developed between 1925 and 1958. As well there are several micro hydro schemes under private generation especially in the tea estates, whose exact capacities have not been established. The highlands in the wetter part of the country like the Mt. Kenya, Aberdare, Nyambene and Mt. Elgon hold the largest potential. Other areas with considerable potential are the Kisii highlands, Nandi hills, Cherangani hills, Kerio and Mau escarpment, and to a lesser extent the Shimba hills at the coast. A feasibility study commissioned by the Ministry of Energy in western Kenya identified two sites with quite a considerable hydro electric potential. More recently several sites with various potentials have been identified, especially around Mt Kenya, Aberdare, Mt. Elgon, Kerio and Nandi Escarpments[1].

Pico hydro is generally classified as water powered generating systems that produce up to 5kW of electrical power. In Nepal there are more than 600 pico hydros serving a total of more than 10,000 households. In Kenya, three schemes have been installed since 2001, which together supply 325 households. The first two schemes were part-funded by the European Commission, though the communities paid for the distribution systems, house wiring components and contributed free labour and trees to make distribution poles. The third scheme, for 150 households, was carried out without subsidy or grant by a small engineering company that had been involved in the earlier projects. Technical details of the first two projects are presented in case studies [Maher2002]. The electricity is distributed at 230 Volts single phase and restricted to houses that are within 1km of the turbine. Each household subscribes to one or more 10 Watt ‘light packages’ which are sufficient for one 8 Watt Compact Fluorescent Lamp (CFL) and a radio, for which they pay US$0.65 per month per package. This is used to pay a member of the community who operates and maintains the system and contributes to a repair fund. 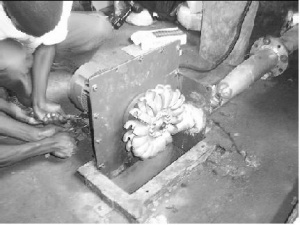 Whilst the power supplied to each house is very similar to the peak output of a Solar Home System (SHS) the actual energy supplied is significantly higher as the power output is continuous unless there is a prolonged drought. A cost comparison between pico hydro and SHS gives a cost of $0.15 per kWh for pico hydro compared to more than $1 for SHS [Maher et al, 2003]. The power is currently used for lighting, radios, small TVs and mobile phone charging. At one site a cordless drill is recharged and loaned to community members. The shaft power of the turbine could be used for agro-processing, though this application has not been developed. Pico hydro is mainly limited to the upland areas of Kenya with moderate or high rainfall, such as the Aberdare and Kirinyaga districts, as this is where most suitable sites exist. These upland areas experience more cloudy weather, including three months with almost continuous cloud called the Gathano season during which SHS produce very little power. Locally implemented pico hydro is cheaper than SHS and is a more versatile source of power, it also relies less heavily on imported equipment.


While the Government of Kenya deliberately seeks reforms in the energy sector by encouraging private sector ownership and implementing policies that support diversification of energy sources, several specific steps to off-set current vulnerabilities have yet to be implemented. Several key instruments supporting increased resilience in the energy system such as the availability of flood maps, existence and enforcement of power plant silting and construction guidelines and emergency plans to react to extreme weather events are not available. Even though the country depends heavily on hydropower systems for electricity supply, there are no national plans for optimizing hydropower plants operation under alternative future flow regimes.

The Community Based Rural Electrification – Micro Hydro: Thima and Kathamba Pico-Hydro Project, Kenya sought to remove the policy, technical and institutional barriers that limited the development and use of renewable energy sources to meet the energy needs of poor, off-grid communities. By demonstrating how communities can organize themselves to build and operate a micro hydropower plant, and by showing how the new supply of energy can improve their lives, the Tungu-Kabiri community project has stimulated changes in national policy and encouraged efforts to build domestic capacity to produce micro hydro system components.


The grantee, the Intermediate Technology Development Group Eastern Africa (ITDG-EA), worked closely with the Tungu-Kabiri community in developing and carrying out the micro hydropower scheme . About 200 members of this 300 household community came together to form a commercial enterprise to own and operate the micro hydropower plant. Each individual purchaseda share in the company, with the maximum share having a value of approximately $50. The 200 members contributed free labor and participated in building a run-of-the-river, “penstock” type micro hydropower system, dedicating one day per week for over a year. In addition, government involvement was sought from the start, and the Ministry of Energy provided technical support throughout the project. The community acquired one acre of land from the government, where they built a micro-enterprise centre that now receives power through the project. A 10-member community power committee manages the day-to-day operations of the plant, and conducts community consultations to decide upon additional uses for the power generated by the system. In this way,the power committee is also playing the role of a village development agency[2].

Retrieved from "https://energypedia.info/index.php?title=Hydropower_Potential_in_Kenya&oldid=116531"
Categories:
Cookies help us deliver our services. By using our services, you agree to our use of cookies.