Impact of Taxes on Solar Photovoltaic in India

This articles is based on the publication, "India's Energy Transition: The Impact of the Goods and Services Tax on Solar Photovoltaic and Coal Power Costs", by the Global Subsidies Initiative (GSI) of the International Institute for Sustainable Development (IISD) and the Council on Energy, Environment and Water (CEEW).


It summarizes the impact on Solar Photovoltaic (PV') power plants after the newly implemented Goods and Service Tax (GST).

Impact of GST on Subsidy for Solar PV

According to the publication, GST will result in a decrease of 15.6 per cent and 16 per cent in the total tax subsidy for solar PV and coal thermal power. Although the decrease is relatively similar for both the technologies, solar currently receives half the subsidies that coal receives. 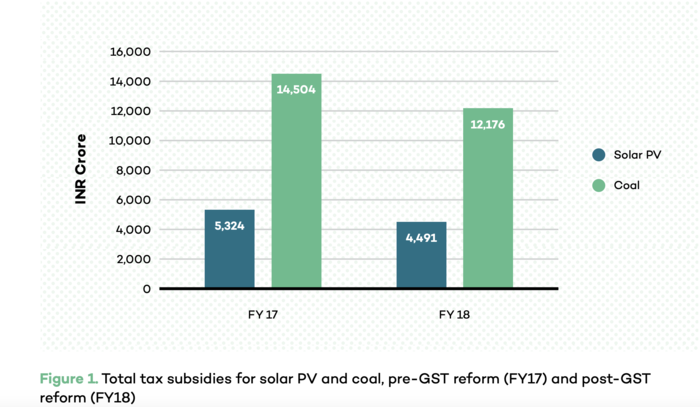 Impact on Levelized Cost of Electricity (LCOE) for Solar PV

LCOE is a metric for measuring the cost of electricity generation during the lifetime of an energy source. For calculating LCOE, the lifetime cost of the energy source (includes capital costs, O&M, performance and fuel costs) is divided by the energy produced. It helps to compare between different technologies. [1]

The author calculated that the impact of LCOE on a 200 MW plant solar park project and found that after GST the LCOE increased by 5.8 as compared to pre-GST. 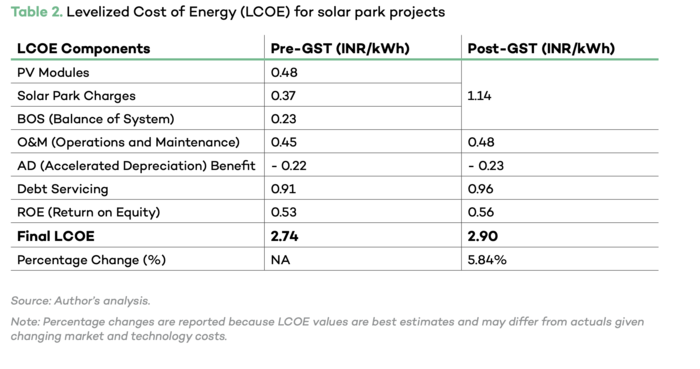 Other Taxes and Compensation

Along with the GST, two other taxes and compensations were introduced in India in 2018.

Since July 2018, there is a safeguard duty on all solar PV cells and modules. They have to pay a duty of 25% in the first year and 20 percent in the following six months and 15 percent for the last six months.

There is a lot of uncertainty concerning how GST will be applied in the solar sector. This has resulted in deployment of solar PV and also raised hte cost for those projects awarded before GST. Therefore, the report provides the following suggestations: