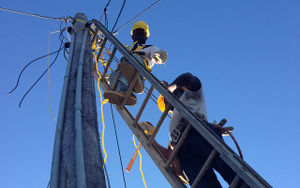 Centralized monopolistic grid extension has until recently been the only approach to electrification. It is now accepted, however, that in order to meet the 2030 goal of universal access to energy it will be fundamental to facilitate:

The transition to competitive energy markets concludes the era of the power sector being in the hands of poorly performing state-owned monopolistic power utilities. Reforming the power markets, upgrading the current infrastructure and implementing new investments are necessary to expand access, and to economic development.

Centralised grid extension is normally the most appropriate and cost-effective means to reach populations in urban settings, or those who live relatively close to the national grid. Decentralised methods, such as mini-grids and stand-alone systems, are on the contrary often the most cost-effective way to provide access in rural and remote settings.

While the roles and responsibilities of the different agencies involved in centralized energy planning were relatively simple, the new reality of liberalized markets and the simultaneous need for centralized and decentralized solutions make the institutional framework somewhat more complex now.

The responsibility of electrification, including access to energy, lies with national Governments. The starting point for most Governments is a vision that is translated into a National Electrification Plan, a kind of “master plan” that may be complemented with a Rural Electrification Plan dedicated to “access to energy” in rural areas. Once the master plan has been adopted, it is often broken down into shorter-term goals and objectives (3-5 years) for implementation.

When formulating their vision and National Electrification Plan, Governments are usually driven by global initiatives like the SDGs, SEforALL and the Paris agreement on climate change, and therefore are very ambitious. In the process of policy development, Governments must consult broadly and obtain views from all major stakeholders including rural communities, the private sector, international financing institutions, the donor community and non-governmental organisations (NGOs).

The short-medium term plans must translate the political vision into concrete deliverables and adapt to restricted national budgets and capacity. They will therefore be less ambitious and perhaps more realistic. The use of electrification planning tools, such as HOMER and others, is fundamental in mapping electrification and giving the different agencies a clear signal regarding the short to medium term goals and objectives. The collection of reliable data on the ground and engagement of all the relevant stakeholders are essential to the planning process.

Good governance also lies within the responsibilities of Governments. As such, they must assure that an appropriate legal and institutional framework is in place to implement the goals and objectives. Innovative policy measures may require establishing new agencies such as an Independent Regulatory Authority to help regulate the market, as well as Rural Electrification Agencies to take responsibility for coordinated electrification at the rural level. Government must allow for the establishment of such bodies and agencies where deemed appropriate and must ensure their independence so they can perform their tasks properly. Good governance also includes measures aimed at improving the institutional environment, such as providing stable long-term infrastructure development plans, enhancing social acceptance for novel approaches to infrastructure development, preparing feasibility studies and bankable infrastructure pipeline projects, and increasing certainty on permits and tariff definition (OECD, 2015b).[1]

Key to making all energy projects and plans a reality is an economic and fiscal policy which allows both private and public utilities engaging in electrification, to recuperate their investments within a reasonable time-frame. Governments must therefore coordinate and align national tax rates, import duties and subsidies in an efficient manner, and allocate sufficient budgetary funds to electrification, especially rural, where needed.

Building regional markets is usually a lengthy and very complicated process as it involves harmonising many sets of rules and balancing policy priorities of many countries. However, larger regional markets created by electrification will provide economies of scale which will bring down the cost of electricity for the end consumer, supporting the electrification itself. It is the responsibility of Government to participate in the building of such regional markets and to grant regional authorities sufficient executive power to attract investment (generation and infrastructure) and make regional markets a reality.

Finally, as electrification is not an end in of  itself, but a means to human and economic development of a nation, it is important that electrification plans are consistent with the social, economic and environmental priorities of other Ministries such as health, education, agriculture, gender equality, etc. Synergy between energy access objectives and overall development objectives is key to optimizing and implementing cross-sector policies. It is also necessary to ensure adequate national and international funding.

Regulators are often part of the executive branch of Government, but ideally they should be able to perform their functions independently to assure the stability and continuity needed to create a stable regulatory framework that protects consumers while attracting needed long-term investments.

It is clear that market-based power sector reforms significantly change the way electrification is managed. As part of these reforms, new private players are integrated in the power sector and state-owned utilities are commercialized. The need to level the playing field to facilitate co-existence between new players and state-owned utilities, requires that appropriate regulation be introduced.

In most developing countries, where levels of access to electricity are low, regulators face the double challenge of having on the one hand to level the playing field while meeting ambitious access goals set by Government to provide affordable rates to the poorest of the poor. All this is made additionally challenging by the presence of a fast growing population.

Regulators must therefore develop a regulatory framework that incentivizes increased competition and investment in centralized electricity generation and distribution while at the same time allowing distributed systems to scale up. Top-down and bottom-up electrification must complement each other in order to reach the electrification targets and the regulator must set up a regulatory framework that assures that the two approaches supplement rather than obstruct each other.

Centralized electrification by grid extension can, in principle, be addressed with the customary regulatory approaches and should therefore set the tariffs, connection charges, subsidies and technological standards needed to develop an efficient system.

Developing countries will have to face obstacles that are not generally an issue in developed countries, such as the affordability of connection for the poorest of the population, illegal connections and how to avoid them, unpaid bills especially by large public institutions, as well as how and where to extend the grid first, allowing for the decentralized players to focus on other areas in the meantime.

Access to energy by the population not served by the national grid is generally not mentioned in the regulator’s mandate. However, electricity supply to rural areas does not usually involve large profit margins, as population is sparse and demand is relatively low; hence some form of regulation may be justified to incentivize the investments needed in these areas.

Cross-subsidization is the accepted mechanism for keeping connection charges for

new grid connections relatively low. This mechanism is unfeasible in countries where the vast majority of households is not electrified and where the required individual contribution of the others would be too great. It is the responsibility of Regulators to devise a way to cover this “viability gap”, and also to assure that an acceptable quality of service is maintained.

Furthermore, in order to facilitate the development of the market, the regulator is responsible for setting performance standards for rural systems so that there is a certain level of standardization for spare parts available within a market, and ensure that local systems may be hooked up to one another and to the national grid in the future.

Apart from economic and technical regulation, the Regulator is also responsible for the good governance of the whole process. This includes licensing rural electricity operators through a fair procedure; issuing rules for billing and payment, as well as for entry and exit. It also includes monitoring the performance of rural electricity operators and the adherence to license conditions; assuring non-discriminatory and open access to the network. Where relevant, the Regulatory Authority may establish, or suggest that Government set up, Rural Electrification Agencies to support implementation of the framework in rural areas.

The concept of a Rural Electrification Agency (REA) is relatively new in most developing countries. The main function of these agencies is to act on behalf of Government, and possibly of the Regulator, in planning, organizing and financing rural electrification activities. REAs are usually responsible for preparing the national rural electrification plans and strategies in close cooperation with rural communities and rural development agents, following a bottom-up approach.

REAs work in close liaison with the regulatory bodies to design and implement appropriate tariff structures and cross-subsidies for rural areas. They also ensure that appropriate codes and standards are in place and that contractors and certification bodies are available to support rural electrification.

Further, it is the role of REAs to facilitate development and application of appropriate technologies through training and development of relevant skills.

A key challenge for REAs is to improve financing and investment. They should pursue new financing arrangements with various stakeholders and where necessary make recommendations to Government to ensure that policies and legal/regulatory frameworks are supportive.

Utility companies – both public and private - play a major role in electrification in both urban and rural areas by investing in generation and network expansion. In the absence of adequate generation capacity and reliable networks, power would not be available to grid-connected rural systems.

Utilities can influence the rate of electrification and the level of tariffs by utilizing least-cost options and innovative technologies. They must assure to train the necessary manpower to manage these new technologies and services both in urban and rural areas.

Retrieved from "https://energypedia.info/index.php?title=Institutional_Framework_–_Institutions_and_processes&oldid=268754"
Categories:
Cookies help us deliver our services. By using our services, you agree to our use of cookies.