Kerosene, also called paraffin in some countries, is a product of crude oil, and mainly consists of a mixture of hydrocarbons. In many developing countries, Kerosene is commonly used in urban households for both cooking and lighting. Kerosene stoves are widely available and affordable for urban population groups.

For more information on kerosene as a cooking fuel see Cooking with Kerosene. 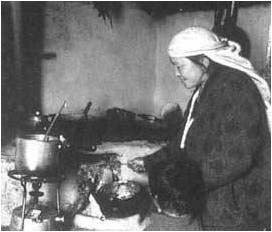 A wide variety of portable kerosene stoves have been developed, which can be grouped into two categories, namely wick type stoves and pressurized stoves. For pictures see HEDON.

Although there are a wide variety of kerosene stoves in use, only few emissions data for kerosene stoves are available. Generally, there is not much information available on kerosene stove tests or performance comparisons to other stove types. In a recent article they are even described as the “least studied cookstoves”.[1] Test results of Aprovecho Research Center showed that when 5 liters of water were boiled and kept simmering for 45 minutes, the tested kerosene wick stove model emitted less CO, PM and used less fuel compared to many other stove types.[2]

Simple stoves are constructed in the same way as oil lamps, which use a wick to draw fuel from the tank to the burner and which produce a lot of soot due to incomplete combustion.[3] Improved kerosene wick stoves can have up to 30 or 40 wicks. A common design incorporates a series of wicks, usually made of loosely twisted or woven cotton, placed in a holder such that they can be moved up and down by a control lever or knob.[4]

Wick stoves are cheap but also very unsafe. An inherent problem of wick type stoves is the tank may heat up when used for a long time, causing an explosion of the stove. Due to unsafe performance of kerosene wick stoves, South Africa made new standards for paraffin wick stoves mandatory in 2007, thus banning the old stoves.[5] This triggered the development of a number of new wick paraffin stoves in South Africa, which are safer and more efficient.

Pressurized stoves are more expensive, but also safer, more convenient and efficient. Air and kerosene can be premixed by means of a hand pump. A pressurized kerosene stove has a fuel tank, a vapor burner and a pot holder. Vaporized kerosene fuel is passed under pressure through a nozzle and mixes with air to form a flame. To initiate the process the vaporizer has to be preheated using an alcohol based flame which burns for several minutes in a tray placed below the vaporizer. Once the temperature of the vaporizer is raised sufficiently the kerosene can then be vaporized by the heat of the cooking flame and the alcohol flame can be allowed to extinguish. The pressure forces kerosene through the vaporizer continuously and is controlled by the adjustment valve.[4] To control the flame intensity, thus the heat output, the user can regulate the pressure of the tank by pumping the tank more to increase the pressure and make the flame larger; turning a small "air screw" (usually located in the filler cap) will release pressure from the tank and make the flame smaller.[3]

The Primus stove, the first pressurized-burner kerosene stove, was developed in 1892.  It quickly earned a reputation as a reliable and durable stove in everyday use.[3]

Advantages and Disadvantages of Kerosene Stoves

Retrieved from "https://energypedia.info/index.php?title=Kerosene_Stoves&oldid=255158"
Categories:
Cookies help us deliver our services. By using our services, you agree to our use of cookies.