The study "A comparison of fuel use between a low cost, improved wood stove and traditional three-stone stove in rural Kenya" uses Kitchen Performance Tests (KPT) to evaluate reductions in fuel emissions through the adoption of rocket mud stoves. This is a method that hasn’t been used very frequently, as most studies have focused on Water Boiling Tests (WBT) and Controlled Cooking Tests (CCT), which are easier and cheaper to conduct. The KPT is unique in the sense that it evaluates the effect of improved stoves in real-world conditions, in real locations by real users.

It assesses the fuel consumption performance of Rocket Mud Stoves (RMS), as promoted by GIZ in Kenya. It does this by assessing the effect of an introduction both cross-sectionally (between nearby households with and without RMS) as well as longitudinally (before and after the installation of a RMS). The authors chose to conduct both studies in order to gain more robust results, overcoming the limitations of each approach.

A total number of 300 households participated, of which 150 already owned a Rocket Mud Stove and the other 150 used three-stone fires. In the end, 145 Kitchen Performance Tests (of which 61 used RMS) were included in the cross-sectional study, and a total of 37 data sets were obtained for the before-after study. 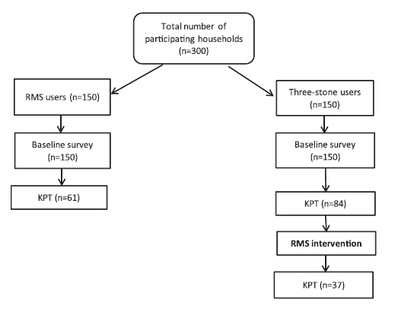 Statistical analysis was done with an OLS regression, allowing for adjustment according to all potentially related variables (such as the age of the cook, socio-economic status, education level, and others) so that results really show the relationship between fuel consumption and using a RMS.

The cross-sectional analysis shows that fuel reductions for RMS users were significant both in the adjusted and unadjusted models. The initial, non-adjusted result was a reduction of 1.3 kg/day in fuel use, from 6.7 kg/day to 5.4 kg/day.

As fuel use was shown to increase with age and socio-economic status, and both were higher in the RMS group, adjusting for them led to a higher decrease in fuel use. After adjusting for the longer cooking times in the RMS group and other variables, final results then showed a significant reduction of 1.6 kg/d in fuel use for those households using a Rocket Mud Stove.

The longitudinal analysis shows an unadjusted reduction in fuel consumption of 1.9 kg/d, after all variables were accounted for the reduction is statistically significant at 2.2 kg/d. Other interesting results include an increase in cooking times and fuel moisture content after the introduction of RMS.

Both types of test show a significant reduction of fuel consumption through the use of Rocket Mud Stoves. The difference in reductions may be due to the fact that user behavior has such a large impact on fuel use – especially older cooks use a lot less fuel. Families with a higher socio-economic status usually use more, and of a higher quality. The study partly accounted for this, but these factors may still have played a role.

The findings have important implications for policy, especially when the policy aim is to relieve the burden of firewood collection or environmental concerns. Cooks are often most concerned with the former, but the 2 kg/d fuel use reduction per household that was estimated translates to 40,000 kg/d per day for Karemo Division, or 14.6 million tons of biomass saved annually. Health effects and pollutant emissions need to be examined more closely, on whether or not the introduction of improved cookstoves has positive implications here.

This article gives a summary of the following paper: